I can assure you that it really is our preference to indulge you with beautiful and funny photos of our chickens and rooster. It’s all part of the great fun of chicken-keeping, if you ask me! And in fact that’s about all we’ve done since we’ve gotten our chickens, such as this post, that you really want to take a peak at first; Flock Photography Fun! However, that’s not what our post is about today. Because with keeping chickens, we knew, eventually comes a few chicken troubles! Such as….chickens feather-picking.   < Deep sigh. >

Considering the incredibly brutal winter we have had here this year, we’d say our rooster and chickens have faired pretty well!  There was bit of a battle with frostbite on crowns and jowls. We did our best to protect them from that, with great coop ventilation, and applying some virgin coconut oil as we could. But Weymouth had the hardest time keeping his jowls from falling into the water when he drank. But anyway, little bits of frostbite were our biggest problem we had run into all winter long. Until……the chickens feather-picking began to happen.

I told you that this post isn’t about pretty photos. I’ll just fore-warn you that this first one is the least pleasant; and then most are pretty enjoyable, if not informative. But we just want to give you the visual of the scope of the problem we had on our hands. It’s not awful, or terribly hard to see, we don’t think. But, just not pretty. 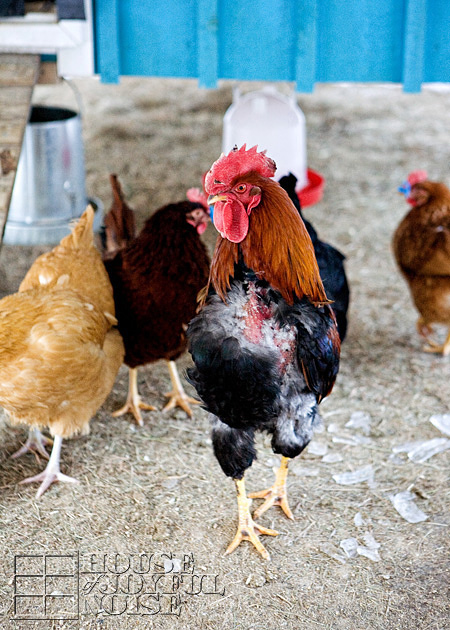 Weymouth, our Welsummer rooster, appeared to be in pretty rough shape!  It kind of went from bad to worse, fast! It first appeared on his side, and then down his leg and across his chest. We knew the chickens, (most especially a guilty-few), were always pecking at Weymouth, plucking his feathers out with their beaks, and consuming them. We watched it happen most every time we glanced over at them, and it frustrated us all, to no end! We couldn’t figure out for the life of us, why the rooster would let his girls do this to him! He is a very good rooster otherwise; very protective and commanding of his girls.

So of course, being the new chicken-keepers that we are, we got researching.  Some of the most common causes were listed as lack of protein, overcrowding, mites, overheated coops/lack of ventilation, or boredom, to name a few.

In our case, discrediting all other possibilities with confidence, we were certain it was possibly a little lack of protein, but most likely, plain old winter boredom. With the incredible amount of snow we have had, they have been rather confined to the run, because the snow had been too deep venture out in. Thus resulting in the girls plucking feathers from Weymouth, I guess.  If not resolved, chicken feather picking can lead to chicken-problems we don’t even want to think about! But anyway, our greatest motivation to fix this problem was because we love our chickens, of course, and want nothing less than health and happiness for them.

So, we started giving them a can of tuna a couple of times a week, to start. And Michael would give them a hay bale with buried meal worms, for them to tear apart, and seek and find the worms, as a boredom buster.  Those things did seem to help a little bit. But not enough. The girls continued to peck at Weymouth, and since separating them was really not an option yet, we needed to find another solution.

So with that, I turned to my favorite chicken-keepers forum, and after a long thread of discussion, we decided that pin-less peepers might be the help we needed to get through this winter.
(Pin-less peepers are essentially blinders, that prevent the bird from seeing forward, directly in front of them.
Thus, making it difficult to eye a feather they want to grasp with their beak, and pluck.)
A fellow chicken-keeper on the forum was even so kind to mail us a handful, as they were ‘going to town in the next few hours to the post office anyway’.  And so, we had pinless peepers in no time, and got educated on how to use them, in as much time. 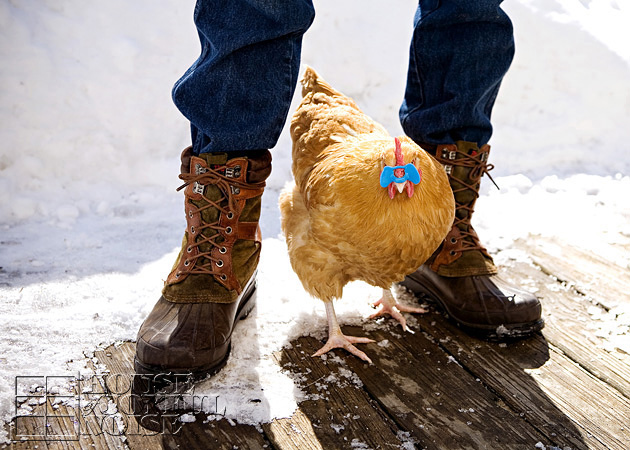 To show you what pin-less peepers look like, here is Kingston, sporting hers.
– 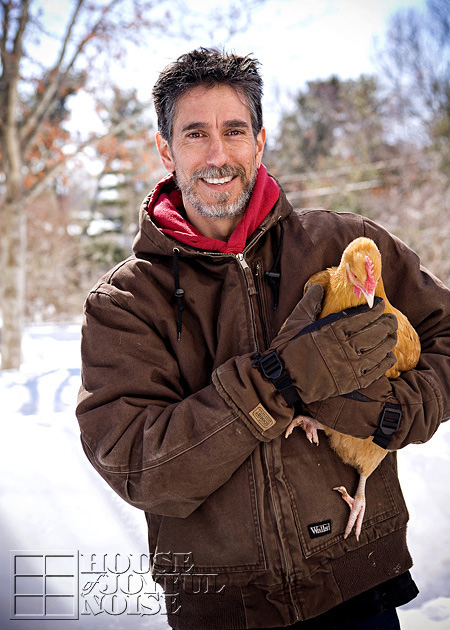 Kingston, the Buff Orpington, was up first, because she is Michael’s love-chicken, and she always runs right up to him when he goes up there. These two are so cute with each other.
Who would think a chicken could love a man so much? Or vice versa, for that matter.
Little did she know what she was in for though, on this day.
– 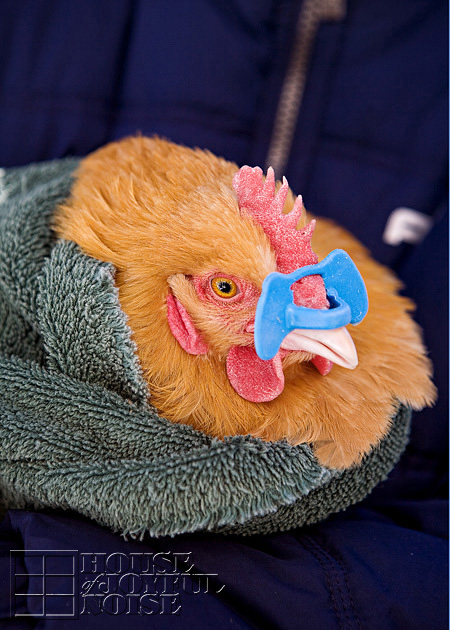 Here she is, all done. It really is painless for them; the application and the wearing of them.
– 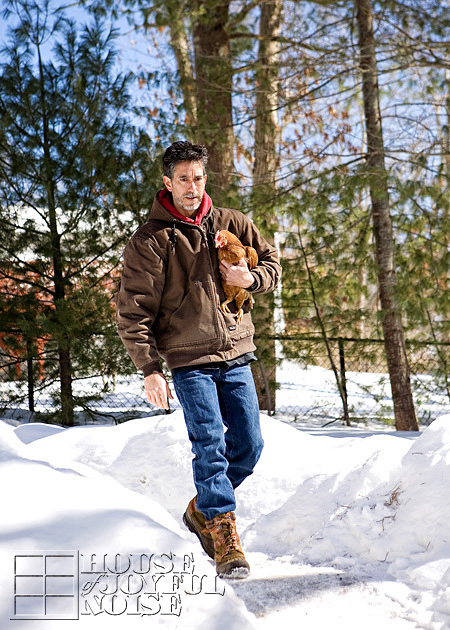 Michael went up to get another chicken.
– 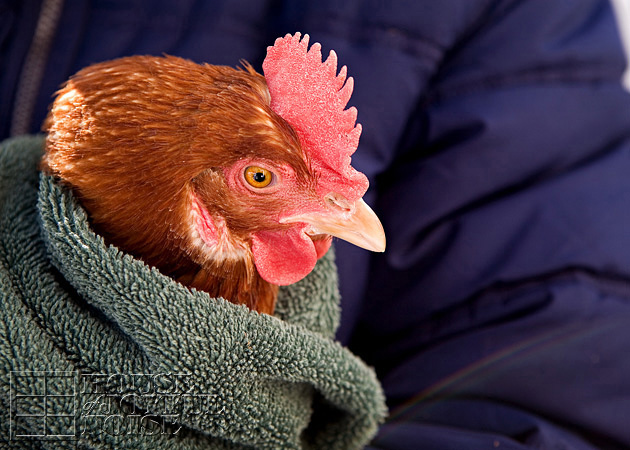 Next up was Westfield; the Red Star/ Golden Comet.
– 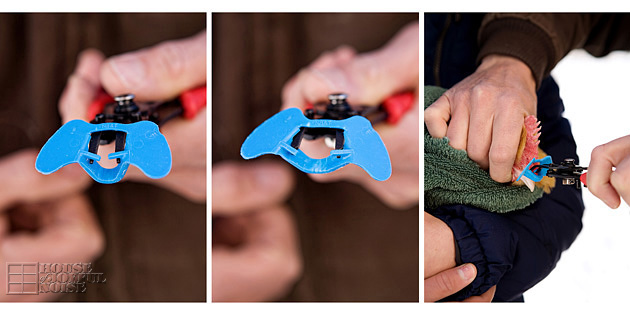 Here is a look at a pin-less peeper. You just spread them open with some snap-ring pliers, and apply it over the chicken’s beak.
The pins actually hook into the chicken’s nostrils. They are called pin-less because….there are peepers that have a pin that actually pierces through the bird’s septum. We did not want those!
– 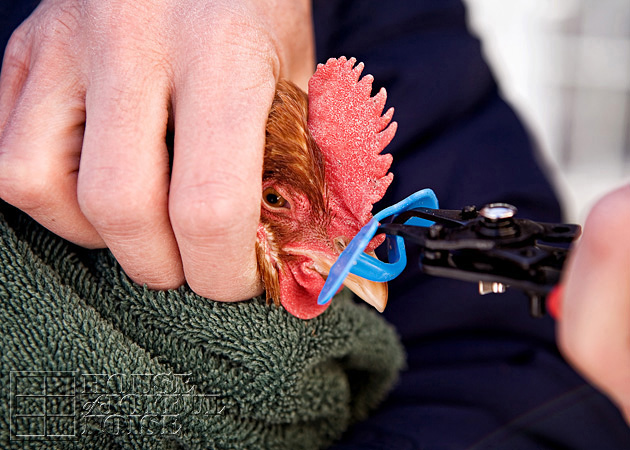 Every chicken was very cooperative. It doesn’t hurt at all. And it appeared each one rather enjoyed the momentary hugs, all wrapped up in the towel.
It is easiest as a 2 person job though; one to hold the chicken, and one to put the peeper on.  So one of the kids helped assist Michael, as I was taking photos, too. 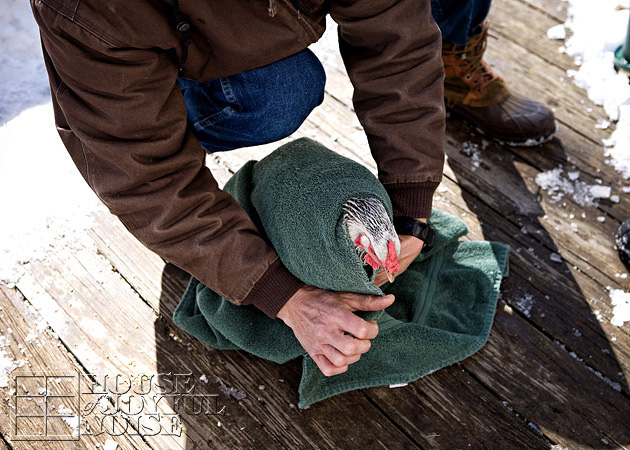 The procedure was as simple as wrapping the chicken comfortably in a towel, just to help hold her wings down….. 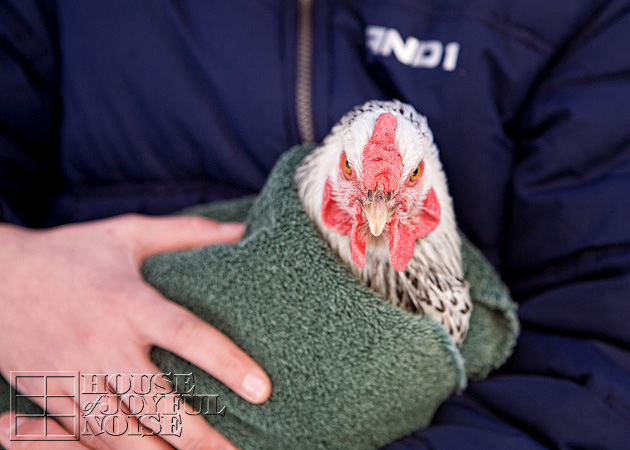 ….and holding her nice and snug, so the peepers can be put on quickly on, without any harm or fuss.
– 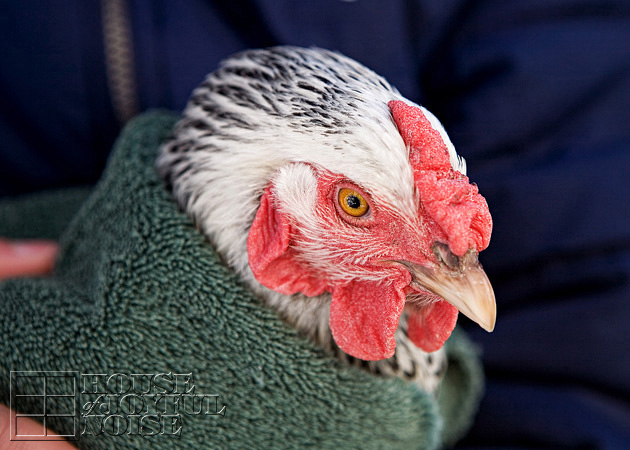 This is Duxbury; our Silver-Laced Wyandotte, ready to go.
– 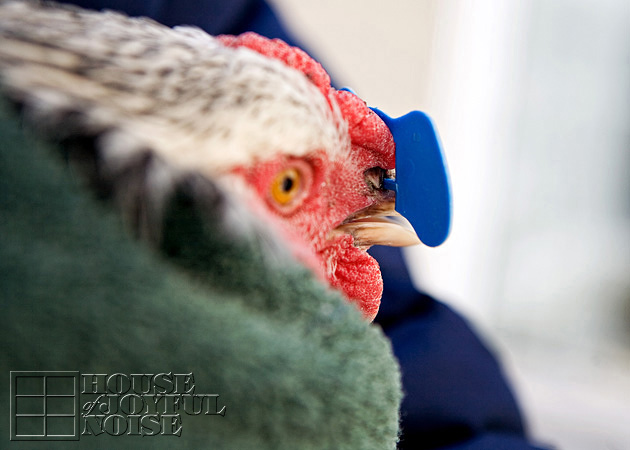 Here in the photo above is a look of how the pin hooks right into the nostril.
While it isn’t painful, I am sure there is a momentary level of discomfort, just from the pressure.
– 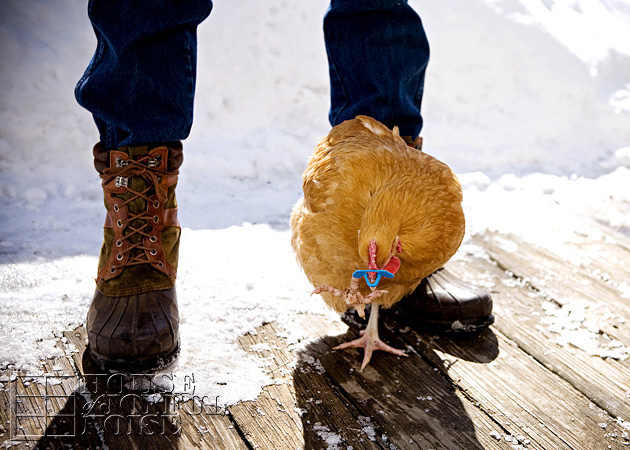 They tend to get disorientated for a bit, and annoyed because they are blinded from seeing straight-forward. So many of them tried to get it off with their foot, or shake their head, trying to get rid of it. But they get over it. I’ve read some chickens can take up to a day to get used to it, but ours adjusted within a matter of a minute or two! We just stayed with each one and comforted them until they seemed to get used to it.
– 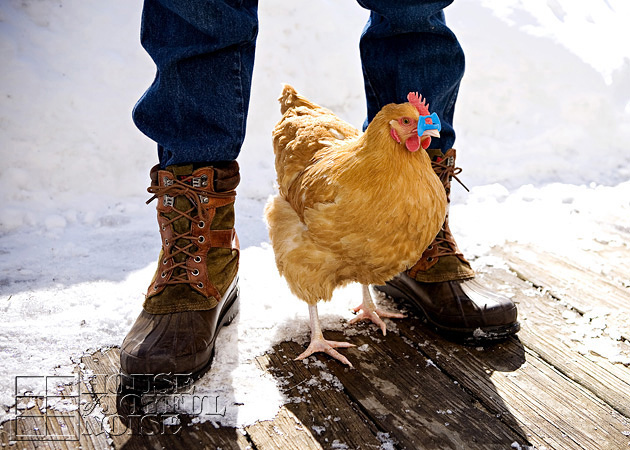 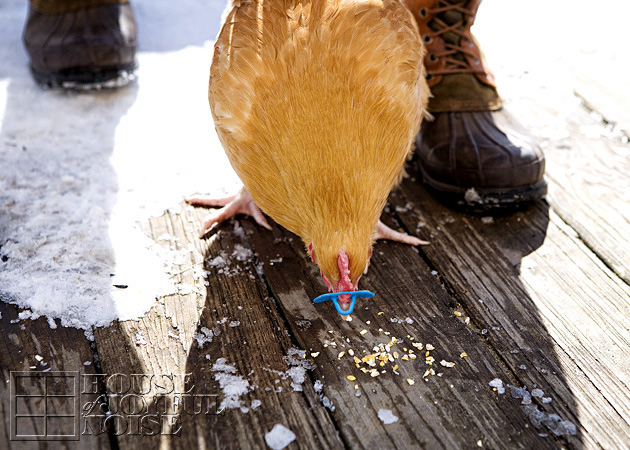 Each of them got a treat of cracked-corn, after their little procedure.
– 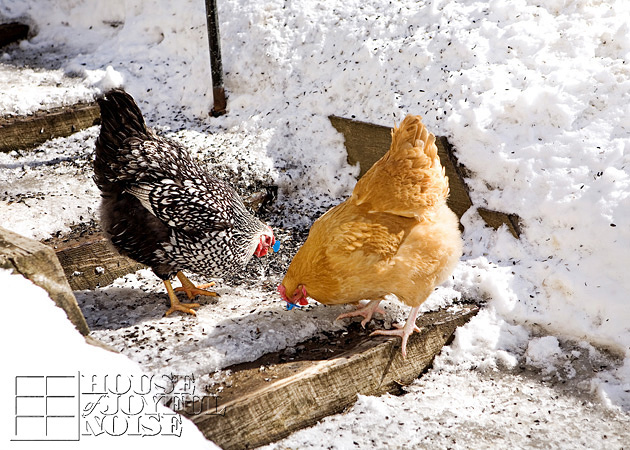 And then ventured over to enjoy the winter sun, and some sunflower seed remnants on the ground, that fell from the wild bird feeder.
– 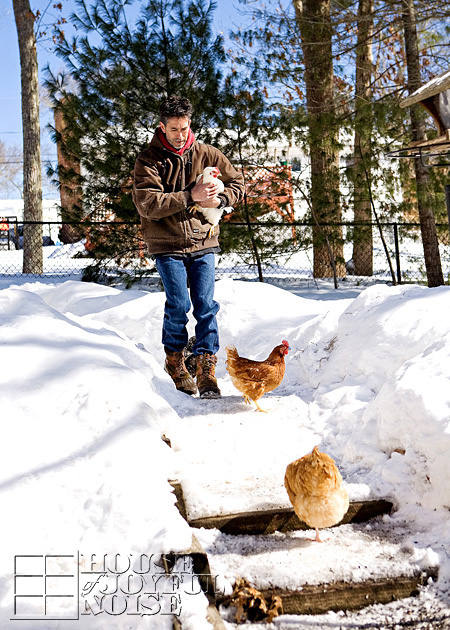 And one by one, they came down, until we were finished.
– 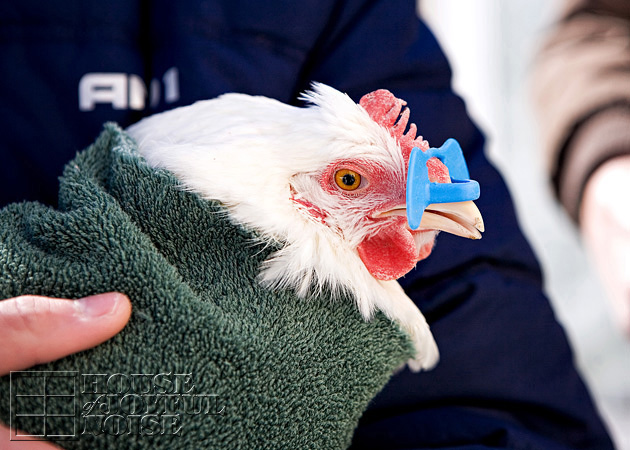 Plymouth; our White Plymouth Rock.
She was the last done.

We let them play and free-range for awhile, and they seemed to be all managing fine.
They even all waddled back up to their coop run, without our assistance. 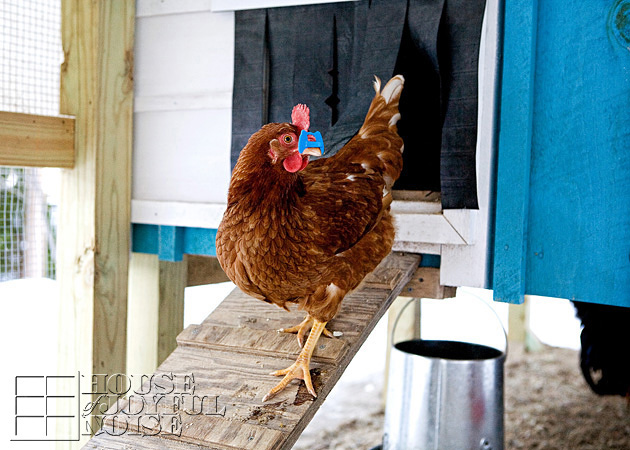 Hey pretty Girl!  Coming out to join the party?
– 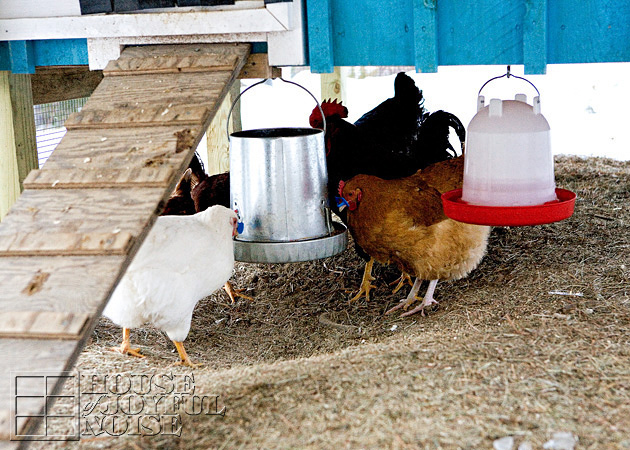 We were relieved to see that they all could get their feed from their feeders just fine, as well.

The girls’ peepers were put on at the end of February, and it is now near the end of March. I’m happy to report that they have worked out well!  The feather-picking stopped as far as we have noticed, and Weymouth’s feathers are growing back in very nicely.  He should be a pretty-boy again, quite soon. 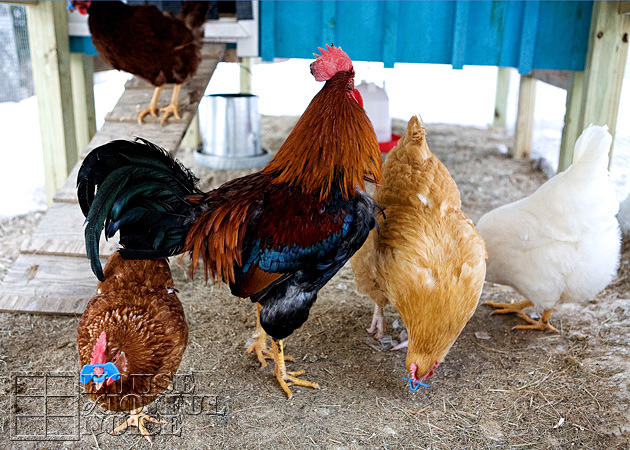 Spring is just around the corner, and just as soon as those warmer days get here, the snow melts, and the girl’s can get out a lot more, we’ll take their peepers off. They will be so busy free-ranging, scratching, finding delectable treats beneath sticks and leaves, and generally being completely content again, that all will be well. And our chicken-problems will be as forgotten as this long-hard winter.
Spring is going to be a beautiful and very welcome season!