We wanted to share with you a simple, little, hand held educational games that our kids get a lot of enjoyment out of!  It’s a great game that helps develop spelling skills, vocabulary, problem solving, motor skills, and more.  And we should let you know that this post contains an affiliate link, for this word game that has provided so much fun-filled educational time for our kids, that we wanted to point you it, and see what you think.

The game is called Word Spin, and it has won several awards–including the Oppenheim 1996 Gold Seal Award, the Best Mind Game of 1995 from MENSA (the high-IQ society), and the 1995 Game of the Year from the Australian Toy Association.   There are larger size versions, but ours happens to be the little key chain version.  Which matters none to our kids.  It’s actually more manageable for small little hands, but our oldest, who has much larger hands,  still plays with it.  And so do I.  :  )   It’s too much fun not to!   What I love most about hand-held games like this, is that they are quiet, and do not require batteries!

The game naturally comes with instructions, and directions of how to play up to 10 different games!  This game is one we have had in our home, and used, since our oldest was little, and so unfortunately our directions have been lost-since there is no way to keep them together.  But really, any parent, or school aged kid, could think up several word games to play on their own, or with one more more others. (Although we really do not recommend losing the directions. lol)

Here’s a little more information about this game:

Word Spin consists of eight interlocking, magnetic spin wheels with 10 facets that each display one letter.  One possible game is where each player takes turns combining the wheels to form words, for a set number of turns each.  With each word a player forms, they add up the points on each letter, and the player with the highest score in the end wins. (Oh, math!)

Our kids have come up with several games of their own, using Word Spin.  Yesterday when the 3 little ones played, these were the challenges they gave each other:

{O} and {S} challenged {J} to spell the word POTTERY our, correctly, with the wheels, and {J} wasted no time getting to work, while the other 2 looked on….. 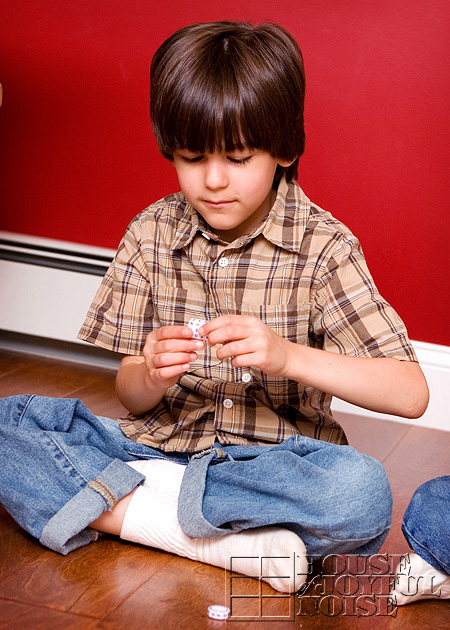 {J} was rapidly getting the word together, and looking pleased with his progress…. 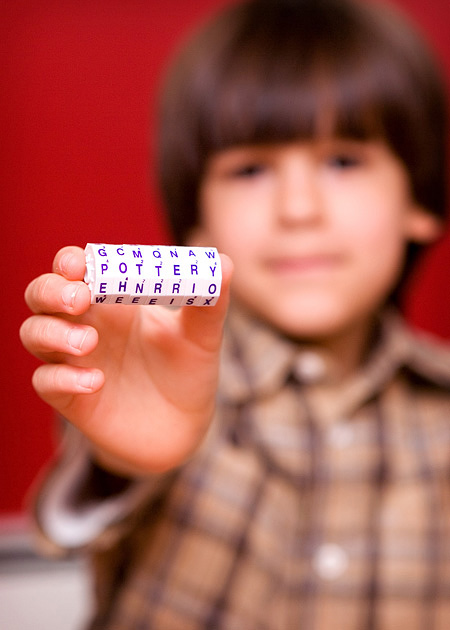 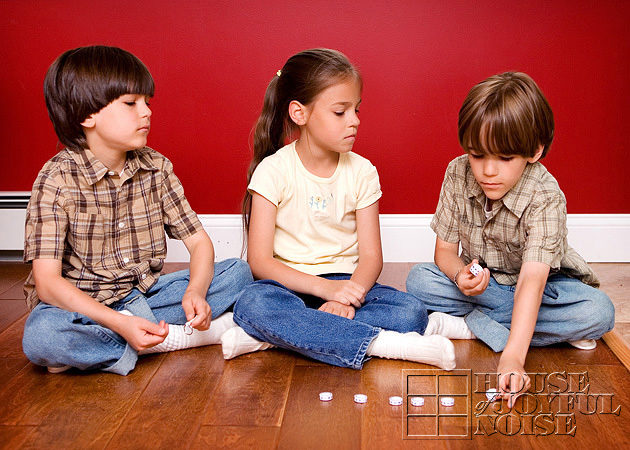 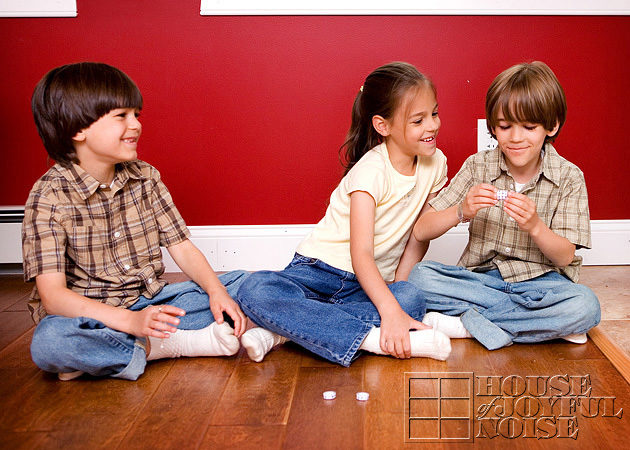 They all got a giggle as {S} frantically took a part and put back together the wheels, looking for the letters he needed…. 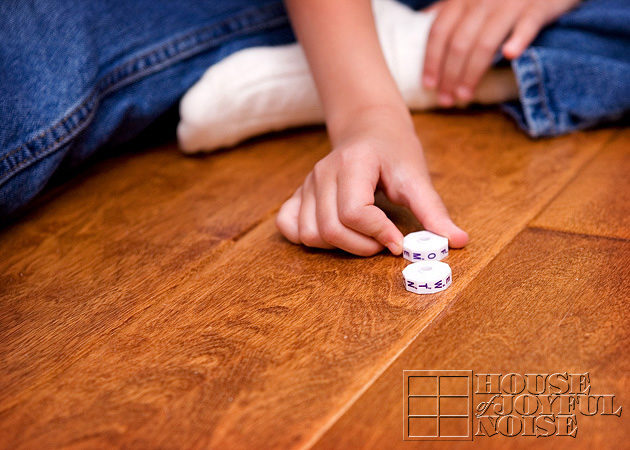 Meanwhile, {O} started playing with the 2 remaining wheels on the floor-which is another fun aspect of this game.  Since all of the wheels are magnetic, they have positive and negative side, with which they can connect all together, or push some around with another. (Oh, science!) 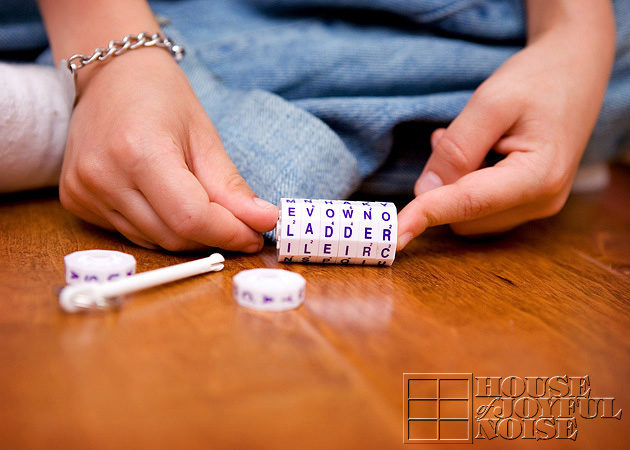 When it was {O}’s turn, they decided to switch up the game,…. 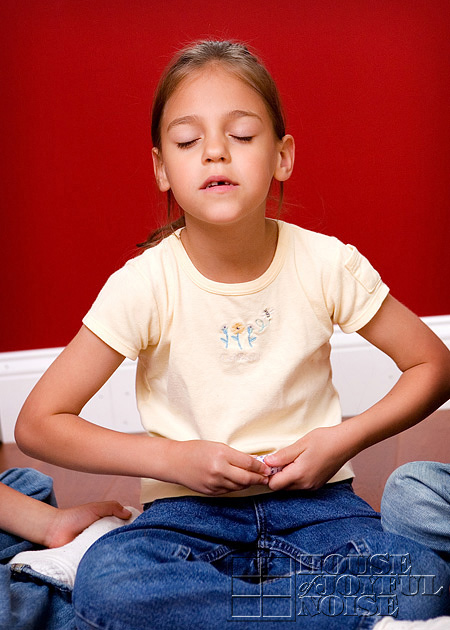 She closed her eyes, and scrambled up the wheels really good.

When she opened her eyes, on the count of 3, she had until their count of 10 to make a 3 letter word.  For this one, taking the wheels apart was not allowed. 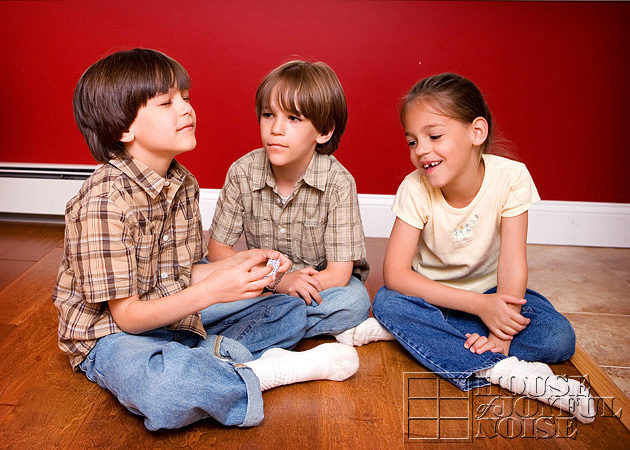 There is no doubt that this little gadget has provided lots of educational FUN for all of the kids here….big and small! 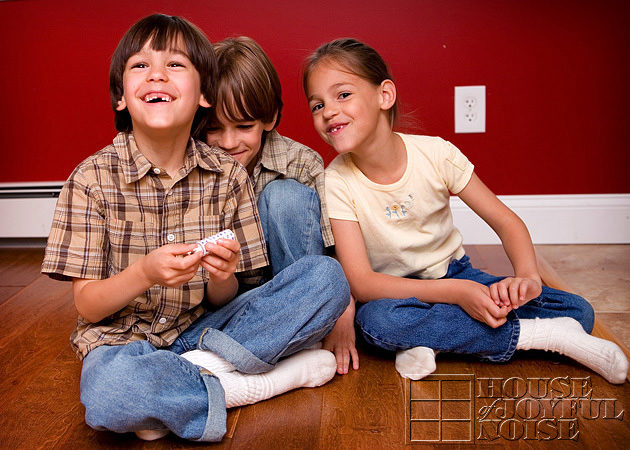 {J} hadn’t even started his turn upon opening his eyes, when he spotted the word (?) BOO!  Could it count a a real word?
Well it was in our online dictionary!

This game has also been handy on long car rides, and also come out of someone’s pocket while we we waited for our meals in a restaurant.

If you are interested in this word game, here is a link the link once again to be purchased online :   WORD SPIN

Although it is also likely still sold in some stores in the games section.

Do you have any simple and educational little hand games your kids love?  We’d love it if you’d share them with us!

Today’s topic of thoughts. WRITING.  More specifically, children’s elementary writing skills development.  If we need to take it one step further in this case…MY children’s writing. : )

As a home schooling Mama, I have to say that this vocation is one amazing journey.  Daily, really. Although some days are less smooth than others, they most always are very enjoyable for all of us, and collectively, absolutely REWARDING. I feel so blessed to not only teach my children, but witness them learning!

And then one day, you witness all of these components come together, and it’s a beautiful day!  The angel choirs sing. The birds are all chirping in harmony. The sun gets brighter. Flowers dance. They are WRITING!  Really writing!  Telling stories of their own, peppered with their personality, on paper, with seemingly magic pencils.  And to Mama Teacher….they are beautiful, heart-warming, hilarious, brilliant little pieces of work……….. 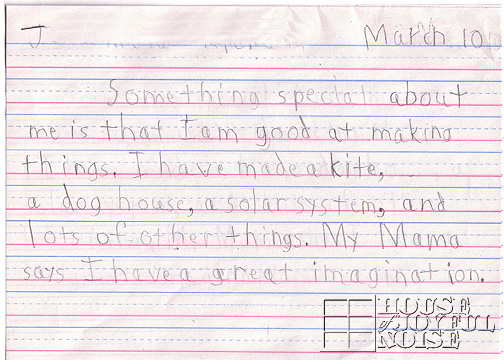 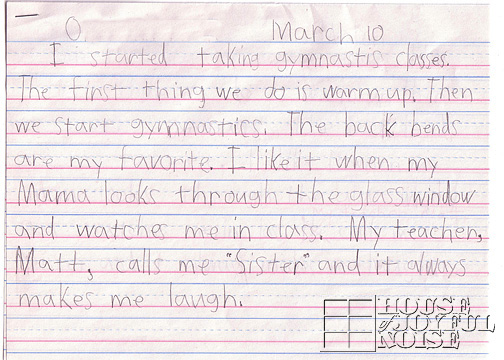 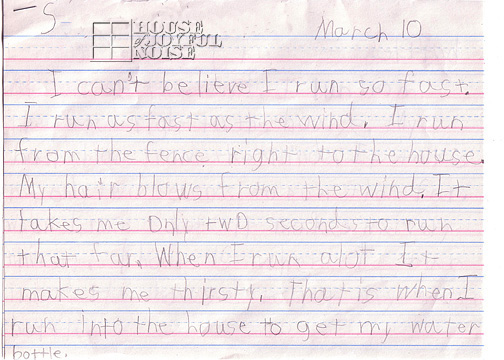 For context, these writing samples are my triplets, who are 6 years old.  Also, please note that they are required to write their whole first name. I just edited out because I don’t use their full names on this blog, while they are still this young.

The month before, they worked REALLY hard, for 2 or 3 days, writing their first animal report.  Honestly, when that assignment came up in their lessons, I thought “Oh dear.” I knew it was going to be a task, for 6 year old first graders. I wondered if they’d really be able to to do it, after only having written single sentences. But I wanted to be encouraging!  And it was a great opportunity to evaluate their capabilities and work ethic, at this point.

So they all chose their animals, and we got to researching some basic information on the computer, for each of them:  {J} chose dolphins, {O} yellow lab puppies (lol), and {S}humpback whales.  I printed out the information we found, and spent lots of time with each of them, reading and underlining the most important tidbits of information they may want to include in their reports. And then, before they got to writing their report, we talked about that all-important P word:  Plagiarism.  : ) 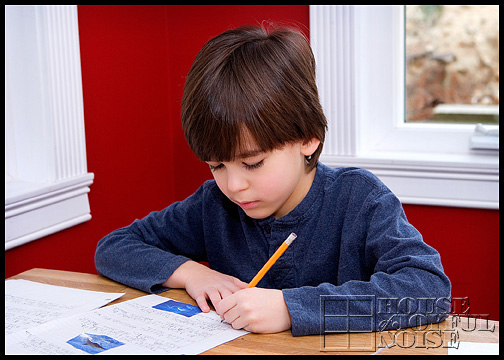 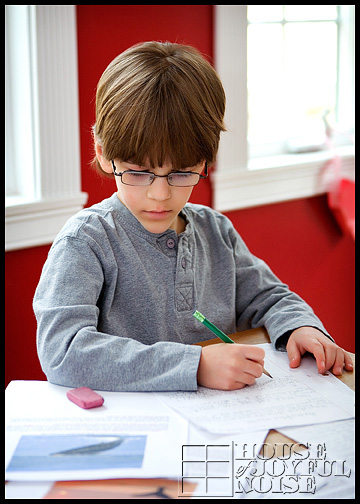 What I really loved, was that they were enthusiastic about it, once they got going. They insisted on cutting out the images that were part of the info we printed out, and including them in their reports, by cutting and pasting them.  I thought this was an idea of their own….but turns out they were inspired by someone else-which I’ll talk about in a minute. 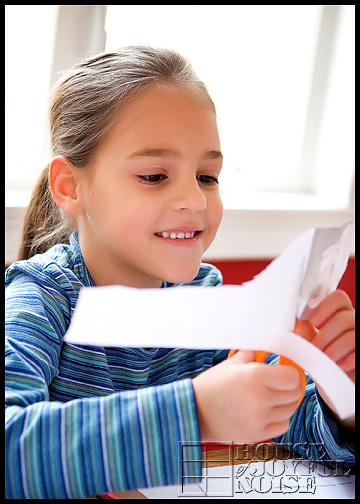 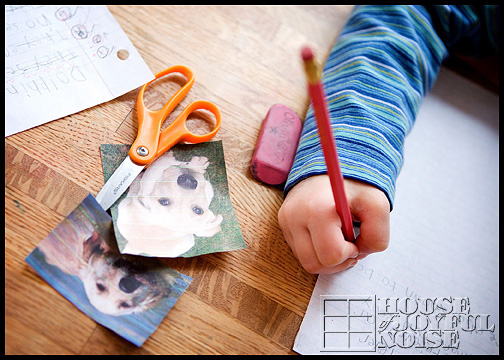 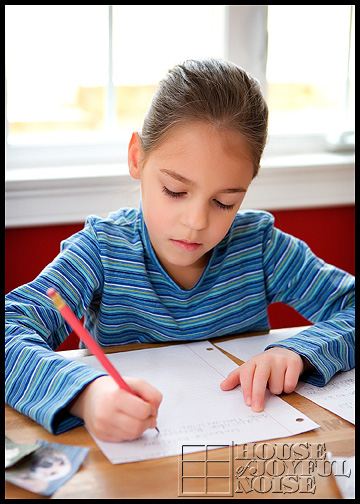 I have to admit;  I have high standards and expectations – and I don’t think I could wrap my brain around just what a simple, simple animal report the lesson was probably really calling for them to do….as 6 year old first graders. Perhaps they were only expected to write a few sentences. But if you are reporting about the important factors of a particular animal, there are many facts that are equally as important about that animal, and therefore, omitting any of those facts could result in what appears to be an incomplete report. Right?  That would have been a lesson that did not serve the children well, come the next time they are expected to write  report. So, I may have ultimately pushed it a little. But in the end, they rose to the occasion, as they always do, when they are clear on the expectations of them. : )  And oh-how-proud they were of their papers. 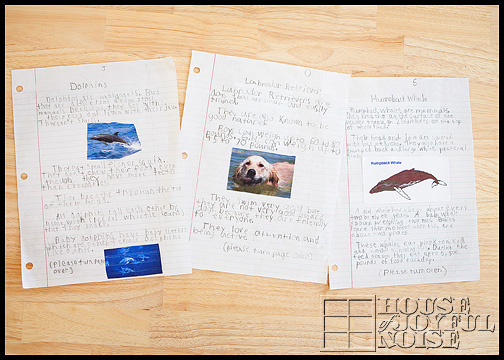 Some days later, I realized where they got the incentive to paste these little images into their report. Granted, as already educated adults, we know that many times in-depth reports DO include photos or labeled diagrams of some kind. But I just wasn’t expecting them to do that yet, or to even know about that.  But, turns out, they had been paying close attention to their older sister (11), who had recently worked very hard for many days, on this report she voluntarily did on her favorite presidents. 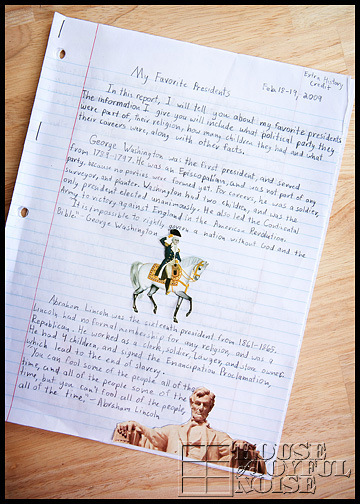 She did it and submitted it to me as extra credit, because she had gotten a poor grade on a recent History test, and she was afraid it would really effect her overall grade. It was an excellent, and interesting, 7 page report.  The information she included for each of her favorite presidents were facts about them as a person,  such as:  the dates of their term of presidency, their political party, how many children they had, interesting tidbits events/actions they were known for, their former or latter occupations, and (something she always wants to know about people)….their religion denomination, if any, etc. 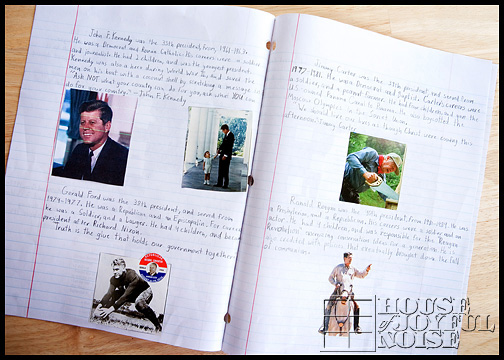 Back to the little ones, here’s another pay-off to these milestone days. Once they realize they are capable of these things, they want to do them all of the time!!   After {J, O & S} wrote their first story that day, that’s what they CHOSE to do right after school, for weeks, when their formal school day ended.  They would ask for paper, and write stories, filled with their imagination, or re-telling true stories they have lived.  They still do this, although more randomly. They continue to do it as an activity, because they find it FUN to express themselves.  To BE the story-teller. To make up characters, name them, make them look like anything they want, and have control over just what happens next in their story. And the best part….how the story ends.  It’s a downright exciting, being a story teller. Just ask my kids.  This is what happens, when you teach in a fun and encouraging way.

And for what it’s worth, I DO teach them that it’s “just not proper English to ever begin a sentence with the word AND.”

And they listen!  ; ) (I am personally of the mind-set, that once you know the rules, you can take creative liberty to break them! )

So, who knows, we may just be raising a bunch of authors over here. Among a zillion other possibilities we’ve seen glimpses of, in the course of their little lives. I guess we’ll have to see how that story ends, too.