Those of you who are long time visitors of a our blog may remember that last year (2008) our family was asked to be filmed for the pilot show of a new series being created by CatholicTV, called House + Home.  The premise of the program is to feature various  Catholic families, that vary in family size and lifestyles, and how they live out their Catholic faith in their daily lives, in their homes, and as a family.  Each episode would feature a new family, and we were the first to be asked and filmed, thus being the pilot show. How crazy is that?!

We blogged about filming day when it took place back in October.   In that post, we said we would let you all know when our episode was to be aired.  But…we didn’t end up doing that, so this is a very late post. Our episode actually aired about countless times throughout the month of June, on CatholicTV.  It was just a crazy time, and we were actually in the midst of completely revamping our blog, and during the process of that, were getting more hits on the blog than ever, because of the show airing, in which Fr. Robert Reed talks about our blog, and even visits it with our kids on film.  And o.k., maybe we were procrastinating a little bit. We were a little startled by all of the attention the show was bringing to us, and we didn’t think it needed our help. lol  So….we just never ended up blogging about it before, but we are really, really excited to see other families featured, because we know we will be left inspired, and it will simply be good tv viewing that we can count on and enjoy.

Since our filming day, there was a little span of time before they resumed filming for the show, featuring other families.  So ours has been the only one being aired and promotes, heavily throughout June, and I think randomly since.  But it is always on their web site as well.   CatholicTV‘s web site is a really fabulous site (and as Fr. Reed wants everyone to know, it’s in high definition!! lol….he’ll be pleased that I mentioned that…lol)…..because you can not only watch any program you want to at any time, but you can also watch CatholicTV LIVE 24/7.  We love that because guess what?  We don’t even get the  CatholicTV channel!!  It is a national television station, but unless you get the BIG digital package of cable, (w/ lots of UNCatholic channels too…; ), that channel doesn’t come in.  SO….we watched our own show on the computer ourselves.  So if you don’t get the CatholicTV channel, and you go to the site, save the link!!  It is awesome Catholic programming, naturally, for adults and kids alike.

Since the show has aired, it has caught the attention of various Catholic and secular news medias, so we have been asked to do several interviews that have been printed in various publications including Catholic Online, and The Pilot (which was pretty exciting, minus my off-moment facial expression.)  We have another interview coming up for the Old Colony Memorial.

Most all of the news reporters, as well as people in general have asked and wanted to know why we agreed to let our family be filmed for this program.  I especially am one that is most comfortable being behind the camera, perhaps because I have control there.  So being in front of a camera of any kind, never mind a national tv video camera  (also high def by the way ; ) , was a bit out of my comfort zone, as well as my husband’s.  The kid were SO FINE with it.  So humility has played a small part in it, but is a part we decided to embrace, in agreeing to be filmed, despite our discomfort.  The virtue of humility may be defined as: “A quality by which a person, considering his own defects, has a lowly opinion of himself and willingly submits himself to God and to others for God sake.”   Therefore, to reject doing the show, to us, would speak of putting ourselves and some vanity we wanted to protect, before our God.  So that there was the biggest premise of our decision.

But we had other reasons we wanted to do the show.  One as we mentioned, was because we support and love the concept of the show.  We knew WE would certainly be interested in seeing how OTHER Catholic families live out their faith in their daily lives, so we thought others probably would too. We wanted to aid in ‘kicking off’ this great idea, to help encourage it to become a successful series.   Some other reasons are:

*We are called, in commitment to our Catholicism, to evangelize our faith.  Since we are not the type that have very strong skills in sharing the Word of God,  with the people we encounter in our daily lives, this seemed like a pretty good way to do it. We knew we were indeed capable, in sharing the best way we could express, how we live our day to day life as a family. So it was an offering of evangelizing in the way of example.

*We LOVE our lifestyle, and the Catholic faith that is so intricately woven into our daily moments, from within our family, our businesses, our homeschooling, our serving others, and every other area and situation in our lives.

*It was an opportunity that just doesn’t come along very often.  We are always inspired and encouraged by other Catholic families, their practices and traditions, perspectives and lifestyles, and it was our opportunity to at least try and give back.  It was a hope that in some way, some other family may see the joy and fulfillment in our family, that comes deeply-rooted from our faith, and be inspired to develop the faith in their own families as well.  Or, for other Catholic families, who DO live much like we do, and feel so alone and different in today’s society, to see that there ARE other families….many other families, who live like they do.  It was an opportunity to reach out, connect and network with those families.

*As a home schooling family, it was a real educational experience for our children!  They would not just learn, but witness, participate in and experience all of the hard work that goes into the production of a television program.

*It would be a wonderful keepsake, in the form of a memory and a film piece, of our children’s childhood, for them AND for us in years to come. And for the generations that follow.

*Also, it should be noted that we love Fr. Robert Reed and we would have a pretty hard time saying ‘no’ to him, for anything he asked of us.

We have not regretted participating in the promotion of this show at all.  We’ve had lots to say about it, in the various news articles we have shared our thoughts with.  While it has drawn far more attention ourselves than we ever anticipated, which we are still adjusting to and are still not 100% comfortable with, it has overall been a ‘good thing’ for our family, and for our Catholic community.

In closing, we would just like to express our heartfelt thanks to the many, many people who have seen and supported the show, and/or our episode,  and have called, sent e-mails, commented on our blog and just came right up to us in person on the street or as members of our parish family (St. Bonaventure’s Parish), to express that they saw us on tv, and how much they enjoyed the program.  We truly appreciate all of your kind words and thoughts. Your support and expressions of faith lift us up.

Most of all, we would like to thank Fr. Reed, for more reasons than we can ever express, really.  We are thankful to you, Fr. Reed, for responding to your personal call of faith in your vocation as a priest, as you touch millions of lives in a loving, inspiring and effective faith-building way – reaching out to adults and children in so many areas.  For all of the mini-Latin lessons you have given {A}, and for being a powerful, significant example of many things, and in many ways, than you will ever know or realize.  (In {A}’s words), for all of the funny memories and times you have had together in the sacristy before and after serving Mass together.  We are also humbled and touched, that you would recognize and embrace our efforts, however full of stumbles, in living out our Catholic faith as a family. You have made a wonderful impression on our family as a whole and as individuals, for life.   Overall, we just think you are a really cool guy, and we have come to love you very much. 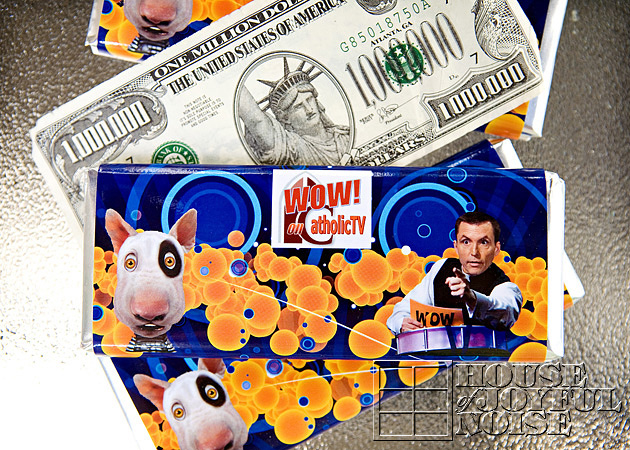 This is a separate post, but related enough that I thought I would tie it in.  It’ll be a whole lot shorter. Promise.

{A}’s’ birthday fell on a Sunday this year.   This made her SO happy because it is not only her favorite day of the week, but she was serving as well, which she loves to do.  Fr. Reed happened to be presiding over that Mass, on her birthday, and shared with the congregation that it was 24 years ago that day, that he was ordained as priest!  So {A} was thrilled they shared that special date, and Fr. Reed expressed after Mass what a funny little coincidence it was too, as we stood around chatting.

Then, he said that he had something for the kids, but said they needed to split it, and use it for their college education.  Then he proceeds to pull out of his pocket, a million dollar bill, and he handed it to them.  The little ones just giggled of course, while {A} prayed it was real. lol.   Of course she knew it was a joke, being no such thing as a million dollar bill.  But it sure looked real!   It was crinkled and everything!  He also gave them chocolate bars with WOW wrappers on it.  (WOW is a CatholicTV Challenge show for kids, of which Fr. Reed also hosts.)

So, it was another happy day for the kids, loaded with more smiles and giggles brought on by Fr. Reed. 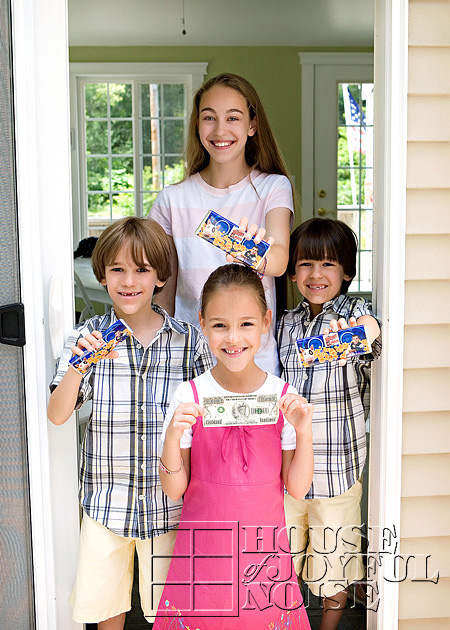