This is a continuation, but digression, of the Peanut Allergy post. What I wanted to tell you in the last post, was how much I have always LOVED peanut butter, but gave it up for the previous 6 years because of the risk it put my son at. I missed it, but I just loved him way more. Understandably. But then we discovered Sunbutter, and it was like, I could kind of have both again.  It’s the best peanut butter alternative around, if you ask us.

For years, on MOST mornings, I would have the same thing for breakfast late in the morning:  coffee first, and later, more coffee with toast and peanut butter.  Peter Pan, preferably, because I loved the sweet peanut-y taste.  I’d be sure to spread it on while the toast was still hot, so it got all melty.  Soooo good.

But naturally, the whole family has had to sacrifice peanut butter, and ANYTHING with peanut ingredients in it, since the discovery of {S}’s allergy.  I’m not sure anyone missed it as much as I did, though.  I mean, it was a strong habit to be broken, all cold turkey like that!  Off course, I loved my boy MORE, and there was no way I would ever risk him to indulge.  But, I have missed that breakfast most every morning since I gave it up.  It was kind of rough at first!  So I’d kiss & hug my boy, and that got me over it immediately.

Just to digress from my digression for one second, I am going to share with you a very quick story about just how scared I am of my boy having a peanut reaction:

3 years ago this February, I was planning a trip to Iowa for a professional photographer’s convention.  I would be gone 5 days.  It occurred to me at one point, “Oh….wow!  I’ll be half way across the country from {S)!  I can have peanut butter toast for breakfast!”  But when that opportunity came, I couldn’t do it!  lol.  Silly, huh?  The CrAzIeSt stuff went through my mind….like, “What if some gets under my nail and I don’t know it?  What if I get some on something and bring it home, and somehow it gets into his system?”  I know. Irrational. I knew I was being RIDICULOUS.    BUT….in my crazy mind, taking that chance just wasn’t worth indulging to me.  So, I settled for plain butter.

Anyway….back to the original story here:

This past summer the kids attended Vacation Bible School.  It sounds mean to say this way, but by the grace of God, the one running the event, a woman, has severe peanut allergies too, along with many other allergies.  So she was pretty pro-active in making sure the environment and snack-menu was absolutely peanut-free.   Not surprisingly, {S} was not the only child with a peanut allergy there.  There was a little girl who was just as much at risk.  Her older brother was a team leader for this VBS along with {A}, and the 2 became friends, so they had a good conversation about this peanut-matter they had in common.

In the course of that conversation, the boy told {A} how they use sunbutter in place of peanut butter.  He told her how they loved it, and where we could get it.  {A} took mental note of it all, which is SO part her nature.  Being the baker, and honestly, food lover, that she is, she knows grocery store layouts/ingredients / grams of sugar…..you name it, well.   She told me all about sunbutter, and had investigated quickly to find that indeed, our usual store we shop at did not carry it.  The store her friend told her about where they DID carry it, was in the opposite direction.

Apparently, this Sunbutter was made with roasted sunflower seeds?   Didn’t sound anything like peanut butter to me.  Really…I doubted it was even close.  So it sure wasn’t worth a special trip just for that.

3 months later, we found ourselves at that store the boy told us about, and {A} was so on task about getting that Sunbutter into our shopping cart, to try. 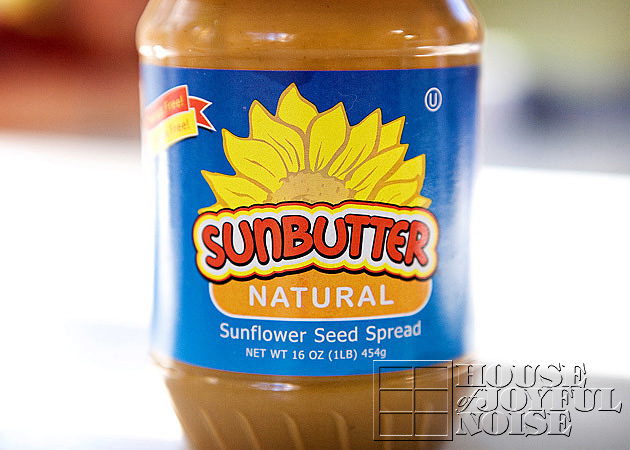 The fact that it LOOKED like peanut butter had me a little hopeful, and very curious.

{A} was already making sandwiches with it.

I made my toast, and spread it on.

It smelled like peanut butter too.  This was just getting WEIRD.

Well, I won’t tell you  how many jars of Sunbutter we have been through since!  ; )

Maybe it doesn’t taste like Skippy, or Jif or whatever other brands, and granted, it had been almost 6 years since I had had any peanut butter at all, but by golly, it sure tasted every bit like Peter Pan Peanut Butter, as I could tell or remember.  If not, freakin’ close enough for me!!!

It is all natural….it needs to be stirred well (like all natural peanut butter).  But once it is, it stays pretty mixed.

It is on the expensive side, being organic.  But…we have always found coupons, and then buy with credit to the store as you get on receipts, and get a real deal!   So we buy 2 or 3 at a time.  : )

The ingredients, to be exact, are:  Sunflower Seed. Dehydrated Cane Juice, Salt and Natural Mixed Tocopherols to preserve freshness.

Overall, Sunbutter is much healthier for you than either butter OR Peter Pan peanut butter too!

But most importantly to us…… 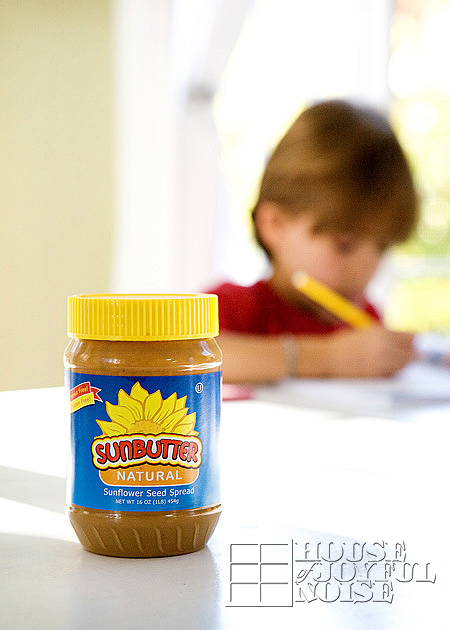 It’s safe to have around {S}.  He can even eat it.
Our whole family enjoys it, without the need to worry that we are putting our boy at risk. 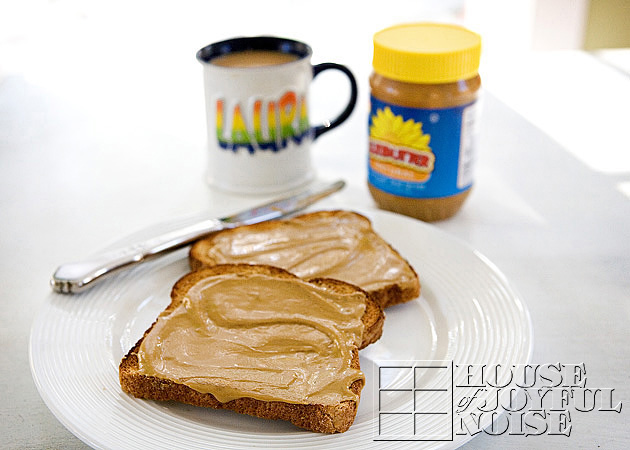 But I don’t think anyone is as happy as I AM!