This post is about peanut and tree nut allergies, and what everyone should know about them.  But it’s relevant to ALL food allergies, and relevant to EVERYONE. So PLEASE, before you skip reading it, thinking you don’t need to because no one in your family has a peanut allergy, we ask you to take the time to anyway.  Many people have at least one thing they wish others were more aware of, and this is certainly ours!  Taking the time to arm yourself with a few facts, could save lives. YOU, could save lives, after reading this. There are so many misconceptions about food allergies, so we feel it is critical to spread some education and awareness about them!  If you read below (also), you will ‘hear’ our story.

I have wanted to post about this for SO long.  But I knew it was a ‘loaded’ one. I knew I would struggle to keep it short (I’ll try anyway.)  It was just….a heavy one for me.  Just talking about this topic literally makes my heart race, and take deep breathes.  But today, I’m doing it.

*NOTE: At the time of the writing of this post, our son’s allergy was to peanuts and peanut products only. In subsequent years, an allergy to cashews and pistachios also.

{S} was around the age of 1-1/2 when we learned, through one of the most terrifying experiences of my life, that he was allergic to peanut products.  It was lunch time, and so we made the triplets lunch. They were always so cute,  in the 3 high chairs that were all lined up, taking up almost all of my kitchen.  It was {S}’s first time having peanut butter and jelly.  They always got so excited to eat (still do!) and were so happy doing it. So I knew something was very wrong, when {S} started really whining, and clawing and grabbing at his chest and stomach. And he wouldn’t eat any more! (? Shock!) I got him down from his chair,  lifted his shirt, and found red welts everywhere.  He looked frightened too, and it was clear something was not right.  Never having seen any of my kids act this way, I quickly called our pediatrician’s office, and they immediately told me to hang up and call the ambulance.  I could hear the siren in the distance when I noticed his lips were swelling.

It took no time at all for the paramedics to arrive, and after a couple of questions, they told us they knew it was a peanut allergy reaction.  They had already given {S} some kind of  shot (which we would become very, very familiar with), and he calmed down quickly.  In the ambulance on the way to the hospital, the paramedic educated me briefly on peanut allergies, and if there was one thing he said that has resonated with me the most, it was this:  That for most people food allergies, the person’s  reaction to the first exposure is usually very mild.  Maybe a tickle in the throat, or a little rash, which can even go un-noticed.  But with every subsequent exposure, the reaction is likely to be 10x worse. This was {S}’s very first time having peanut butter, and his reaction was so bad, an ambulance had to be called.   We knew then…..this wasn’t one day’s event, but something that was going to become part of our life.

The long and short of it is, {S} has an anaphylactic allergy to any and all peanut products.  The most minuscule amount could threaten his life, whether he ingests any bit of peanut product through his mouth, or even nose as a result of something as simple as peanut shell dust being airborn.  His reaction would be immediate, and severe. (We already saw evidence of that.)  He has seen an allergist on a regular basis ever since, and they have monitored his level of allergy to peanut by-products, by way of a blood test called a RAST test.  {S} had an initial blood test the first week we discovered his allergy, and his number was REALLY high then.  In subsequent testing over the years, that number has only climbed.  It is highly unlikely he will ever grow out of it.

Rather than get into trying to educate you all on the specifics of peanut allergies, I really encourage you to click on the new link in the right hand side bar, and read it through.  If not today, on another day when you have time.  There are so many false assumptions and misconceptions (wait…is that the same thing? lol) about peanut allergies, and many allergies in general.  But if anything, we would just love for more people to ‘get it’.  Being contaminated would not be a mere discomfort, or inconvenience for someone who has an an allergy of this kind;  their life is on the line.  The Peanut Allergy link in the right sidebar brings you to a new window, and a brief run down of facts.  We would so appreciate it if you could take the time, sometime, to read it.  Knowledge is power.  And in this case, the power to save a life. If you read no further, please at least commit to doing that at some point.

There are a few things that bring us great comfort, is protecting our son from an anaphylactic reaction, and therefore possible death, as a result of being contaminated by a peanut product of one sort or another.  For one, our families and friends have come to understand the seriousness of our situation, and have made efforts to accommodate keeping a peanut free environment for {S}, at gatherings and such.  We are so grateful for that, but also, at the risk of being annoying, never cease to remind them when we have plans to gather. Secondly, we home school, so we don’t have to worry about such things as having the medication that could save him, in the nurse’s office, or, the ‘peanut-allergy kids lunch table’ that really, just isn’t preventative enough, and/or the parents who have the attitude “Why should my child not be able to eat peanut butter in school, just because yours is allergic” > I’d bet my last dollar they’d see things differently, if it was their child with the allergy.

Before {S} went to Vacation Bible School this year, we got him a medical bracelet, and one that he never ever takes off now…. 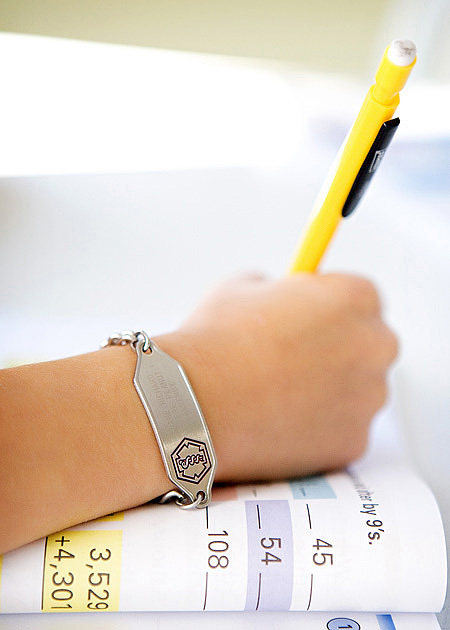 It is engraved, with the message loud and clear.  On the front it says in all caps, his name, and ‘SEVERE PEANUT ALLERGY’.   On the back, it says ‘Anaphylactic Allergy to Any and All Peanut Products’. 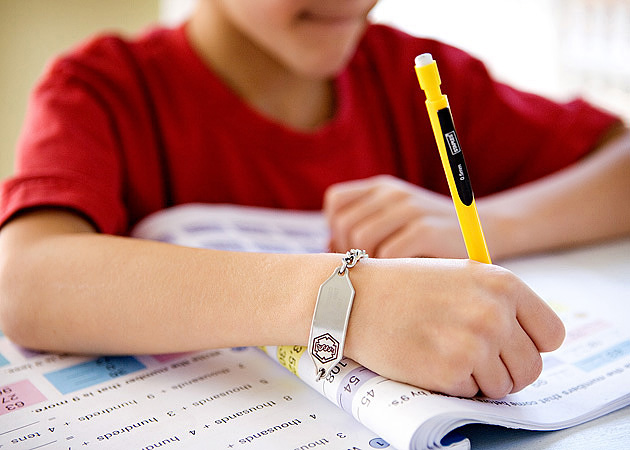 We literally never take it off.  It is getting beat up, because the boy plays hard.  But we’ll just happily replace it any time it needs it.

Also, there is the security of our Epi-Pens!!  {S} goes NOWHERE without them…. 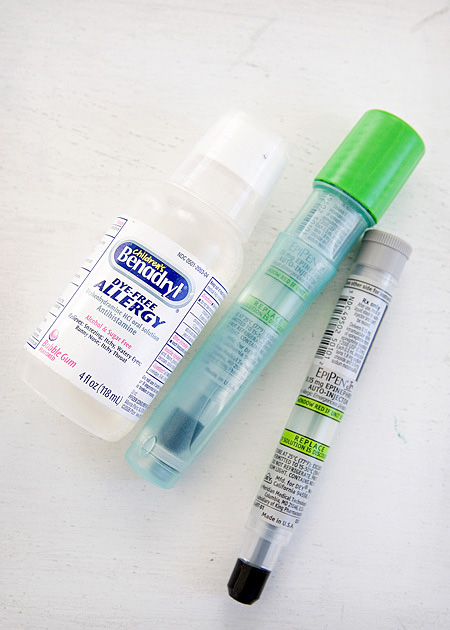 The Benadryl is just for good measure, AFTER you give the shot, and call the ambulance. 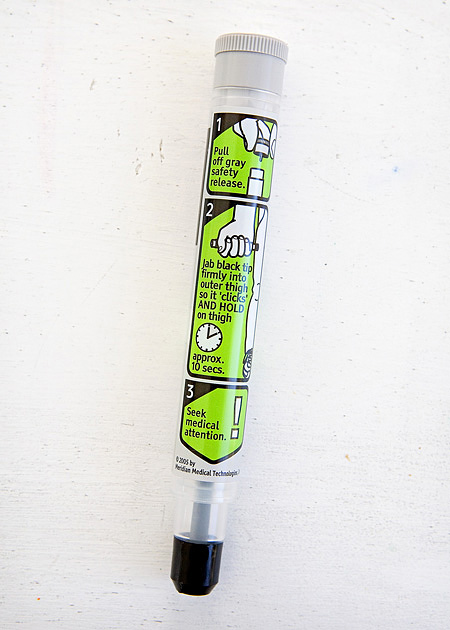 Where ever he is, wherever we go,  they are with him, in this blue bag. …. 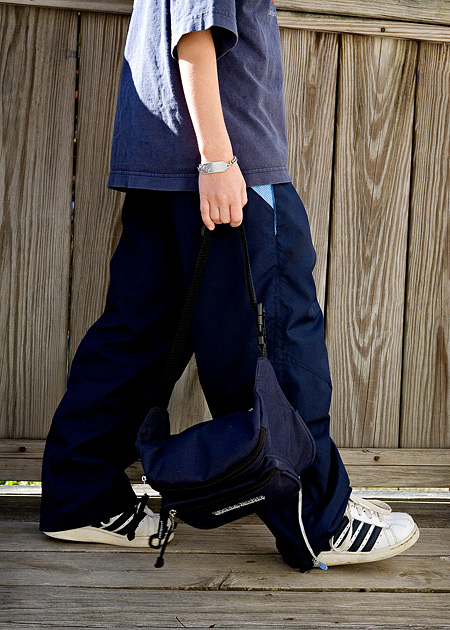 So if you’ve seen me carrying this bag, and just thought I had really bad taste in purses, you were mistaken. (My friend is a handbag designer, I know a dang nice purse when I see one. ; )

We need to have it with us at all times too….even when we think we shouldn’t need it.  Like going to mass.  One time not long ago, the mother right in front of us gave her little girl a package of those peanut butter and cheese crackers, to keep her quiet and occupied.  Besides my major pet-peeve about parents low expectations of their children in church, fear rightly struck all of us on the spot. It would take an emergency before you would see any one of us disrupt a mass for anything, but that’s exactly what we might have done, as we stood right up and moved {S} right out of there.   I didn’t calm down any less though, as I watched this little girl chew, dropping crumbs, with both food and drool falling out of her mouth all over the place, licking her hands and touching the top of the back of the pew right where we would be kneeling at. After mass, another mom I didn’t know, came over to talk to us….because she caught right on to what had happened during mass.  Her nephew almost died with his peanut allergy when he accidentally was contaminated, and that’s when she got it!   She was afraid FOR us all through mass. I could tell you many stories of the places there was peanut contamination where one would never expect it.

There was more to this post…..a HAPPY discovery I especially wanted to share with anyone who DOES have a peanut allergy, or knows someone with one.  A perfect peanut-butter replacement, if you will.  But I know you won’t read much longer, IF you made it this far.  So, I’ll make it Part II of sorts, and I promise it’ll be shorter than this one!  But if you did read all of this, THANK YOU, and if I haven’t mentioned it : )  please read the info through the sidebar as well.  If not today, very soon.

Thank you again, to all of our blog friends and loved ones. <3  And if any of you are seeking a great peanut butter alternative, we recommend this post.