If you’re just joining us, we’ve been sharing the progressive story of our dramatic home transformation, so you are welcome to check out the previous parts of the story at the following links:
Part I
Part II
Before we move on to some real ‘action’, we wanted to take you back inside for a minute…. 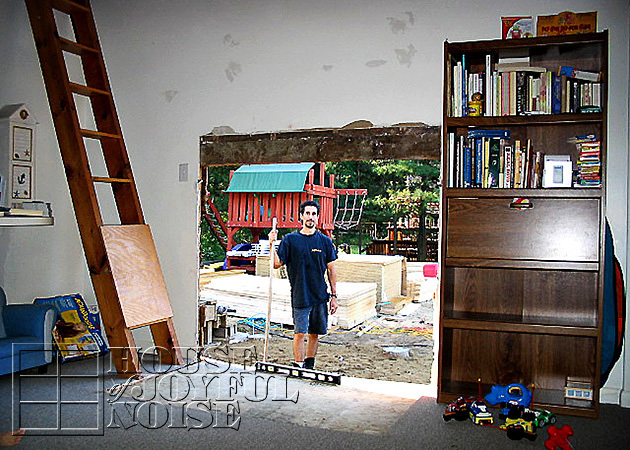 ……re-posting this image, because we want to draw your attention to the ladder you see on the left.  (Something happened to the quality of the image but, it’s not worth going back to get the original or fixing. You get the idea, I am sure. ) Now, as you know by now, we had had this little 2 bedroom home, and found ourselves in the very blessed but unexpected position, of triplets joining our family.   So, we made do – made the most with what we had – did whatever worked.  So we (Michael & I), gave up our bedroom.  That became the triplets room for the time being. We actually had our bed in the main living area, for awhile.  It worked out nicely for me, with feeding the babies and all.  :  )  But it was a TAD awkward when the in-laws came to visit. ; )  lol.   Anyway, once the babies were weaned, and sleeping through the night pretty well, we were desperate to get the bed out of the main room there. So, being the creative problem-solvers that we are…..we took to bed in the crawl loft!!  We put our queen size mattress up there, bedding and all, and that’s where we slept!  It was literally a crawl area…..open and overlooking the living space, with pier like ropes that went from one vertical beam to the next.  And it had this beautiful, heavy-duty, rustic ladder, to get up there.  We always loved that ladder, and our loft!  But who knew it would ever become what we came to call, ‘The Love Loft.”  : )    It’s funny, because when I was little, I was always a little envious of Laura and Mary Ingalls, getting to go up that ladder to their bedroom in the loft every night.  Might be why I found myself looking for our first home with a loft!!  But I swear, I never had ANY intentions or plans of sleeping up there!  Ours…..there was no way you could stand.  There was room to crawl across our mattress, and that was it.  The highest point, which was the opening to the living space cathedral ceiling, was about 4 feet, and the ceiling just tapered down to about 2 feet.  Michael slept on the inside. : )  But I most always headed up the ladder to bed before Michael, and I loved to say, “Come along, Charles. You need your rest.”   Sometimes, if Michael was in the mood to play along, he would respond, “I’ll be right up, Caroline.”….just to make me happy.  And it did. : )

I just had to tell you all that.  Thanks for amusing me.  : )   Oh….and the piece of plywood you see over the front of the ladder, covered the first 2 steps.  It was hinged and hook-locked.  That was a safety measure to prevent the babies from climbing the ladder.  Yes…..we slept in the loft for a LONG time.  Until the babies COULD have climbed the ladder. But I’m telling you…I loved it!  The skylights were over a few feet from us, and on summer nights, it was awesome. 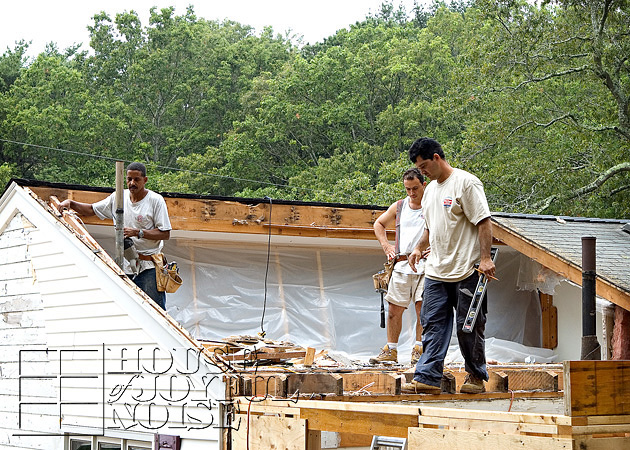 Well, there’s a little peek for you into our love loft, with the roof ripped off.   They needed the school room at least rough framed, so they could rip the roof off and start building the second floor. 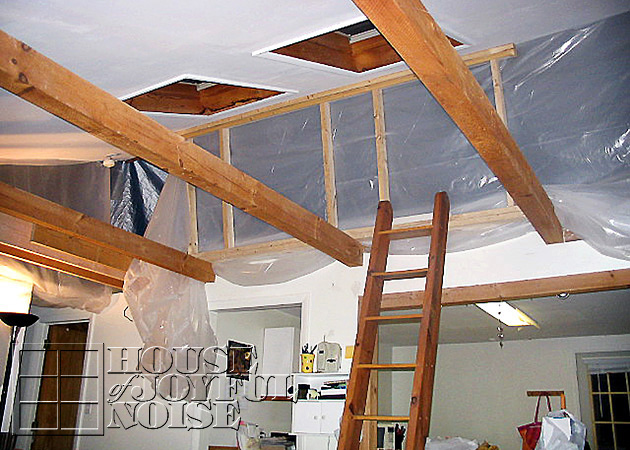 Since our loft was literally gone, we were now sleeping on the living room floor. The cathedral ceiling you see, with the skylights I mentioned, were planned to stay.  But after a couple of nights and days, the contracted builder decided that it wasn’t that structurally safe for us to be living there, and being there, through this point of the construction.  Furthermore, they decided that the cathedral ceiling and peek of the roof as it was, was really more in the way.  They wanted to remove it all because they needed to run a main support beam from the left side of the house, to the right. (30 feet long).  This beam would be at the lowest end of the pitch you see, off the photo to the left.

Bottom line was, the roof had to go so they could do their work correctly, and so do we!!

We had a matter of an hour or so to get what we needed, and get out.  I’m one of those stress packers, especially when it comes to wanting to be sure my kids will have all they need, and I’m a stress-mess when I have a few days to get it all together. But I had an hour.   We didn’t even know where we were going!!

We ended up at a hotel with townhouses, not far up the street.  We live in a tourist, historical town, so there are plenty of places to stay.  Just not plenty of places to stay, affordabley.  Well, with the expenses we had going on, $5 wouldn’t have been considered affordable. lol.   This place was very comfortable and had all we needed.  It was actually 2 floors, lots of beds, and fully equipped kitchen.  For only…..$189.00 a night.  <gulp>  We had no idea how long before we could go home!  Well,  I think we were there for 3 or 4 nights, when I had a brilliant idea, in my place I have so many of my brilliant ideas……..the shower.  You know….white noise….no kids…..I can think in there.  Start to finish.  I am sure SOMEONE out there can relate.  So anyway……it occurred to me, ……. we have an empty beach house right next door to our house! Michael was actually the property manager for it.  So I thought….maybe he could call the owner, and we could get some really cheap rent for a week or 2? The idea was still something we could NOT afford at all, but it HAD to be cheaper than $189 a night!!

So Michael called, and the owner told him there was no bookings, and we could stay there as long as we needed. FOR NOTHING.

<Ok…I just need a moment so I can cry again over this unbelievable blessing from God.> 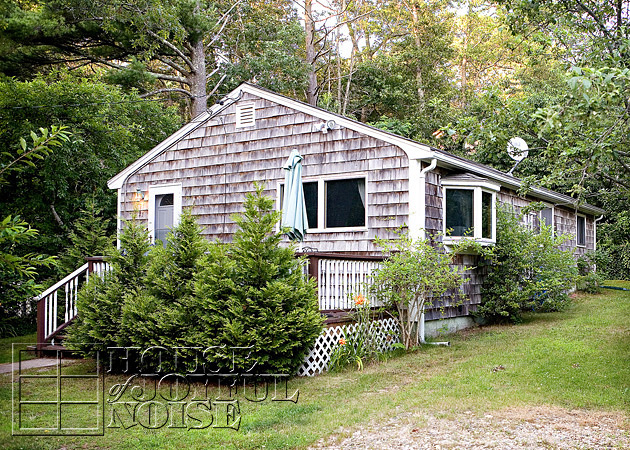 Was someone taking care of us, or what??  It was amazingly generous for the owner to let us stay there for free.  Such a GIFT, and one we needed so badly.  But then, the fact that it was right next door to our house under construction was too good to be true!!  First of all, talk about convenience for anything we needed or forgot.  (We could run in our house, if needed, with warning.)  But also, just to be able to watch the progress of our dream home being built.  I loved that the KIDS could watch it all! Talk about teachable moments!! Do you see the bay window on the right side of the house?  That faces our home, where we could see almost everything going on, at all times. One of our boys loved big trucks and construction equipment.  They all thought our contractor was “Bob the Builder”.  Forgive me, but there was a little bit of resemblance. 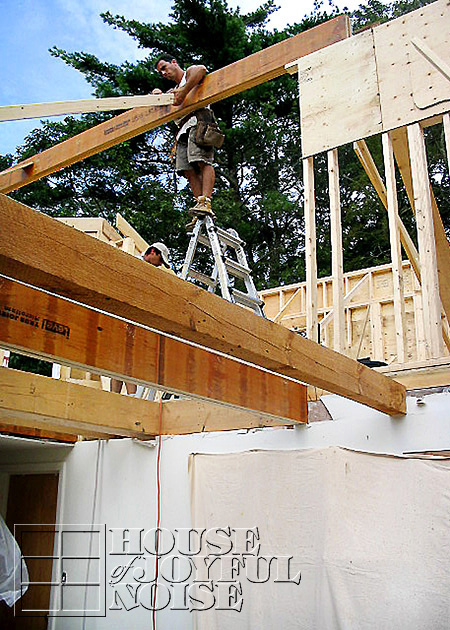 So construction continued, and we were enjoying every bit of it from a clean and comfortable space.

The roof was off of a good portion of the house.  The living room was open to the sky, there was an open second story on over the kitchen, new school room, {A}’s room, the bathroom and 1/2 of the triplets room. 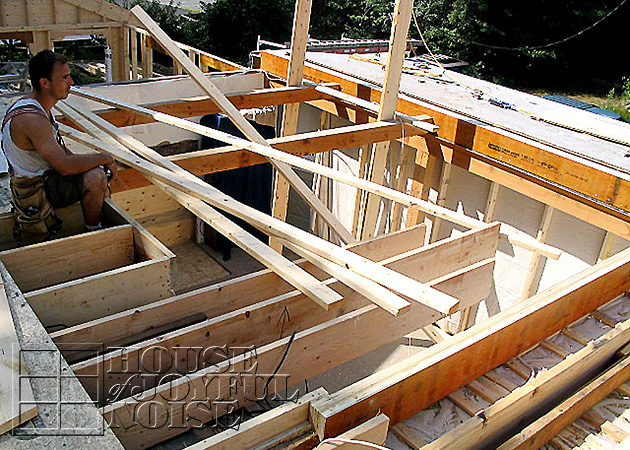 Looking down into living room. Also visible on upper part of photo is the beam that needed to be installed. 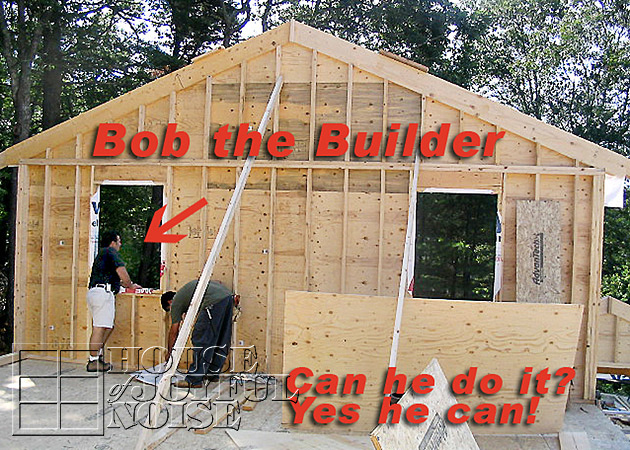 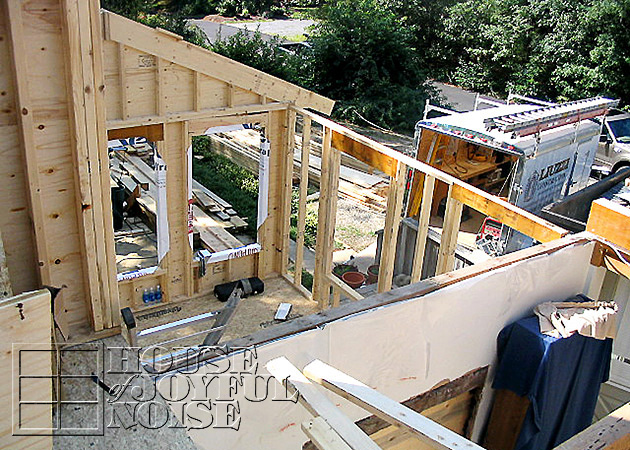 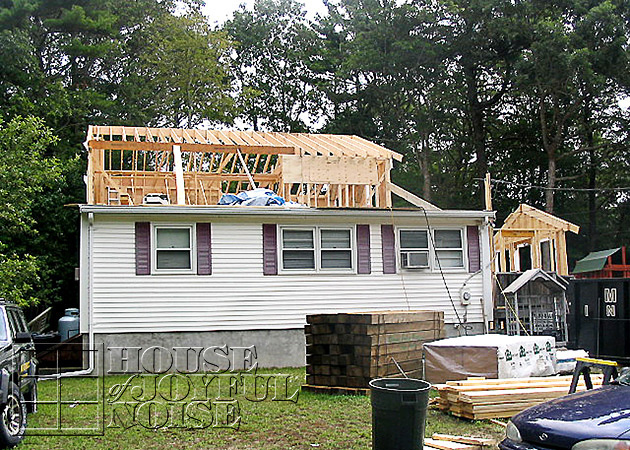 So the house is pretty much open…..unprotected.

Rain was in the forecast, heading our way.  Bad, bad timing.  So the crew covered the house with these tarps. 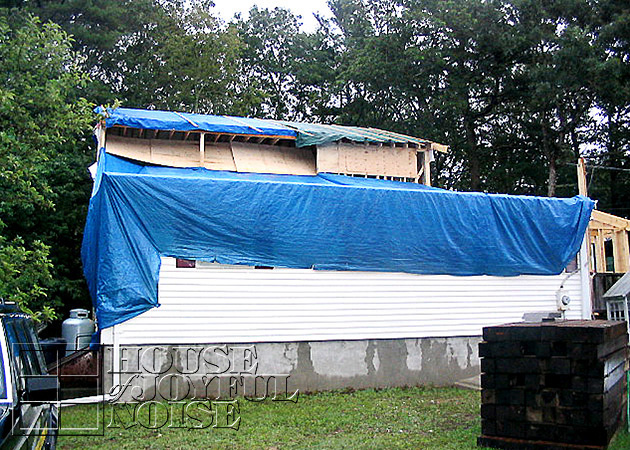 But it was to be a 3 day rain storm, and the tarps were seriously not working well enough…………….

(To be continued…..Here, Final Part)