We are continuing to share with you the process of our HUGE home transformation! Before you get sucked into this post, you don’t want to miss Part I! You’ll really appreciate where we are more, if you read the back story of what (or who, x3) pushed into this major home renovation, and what we started with. 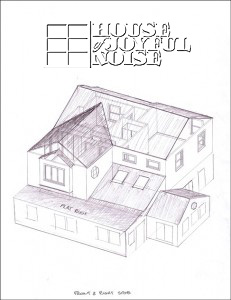 As we dreamed and brainstormed about what would be an ideal home layout for our family, Michael really began by drawing floor plans. We knew we wanted a 4 season sunroom.  We also wanted an area off of the kitchen that could accommodate a big long table, for eating and schooling, and also floor cabinets for all of our schooling books, supplies and tools.  So we decided a room along the back of the house, accessible from the kitchen would be ideal.

Here is Michael’s floor plan of our existing home, at the time, with the 2 rooms we wanted, added: 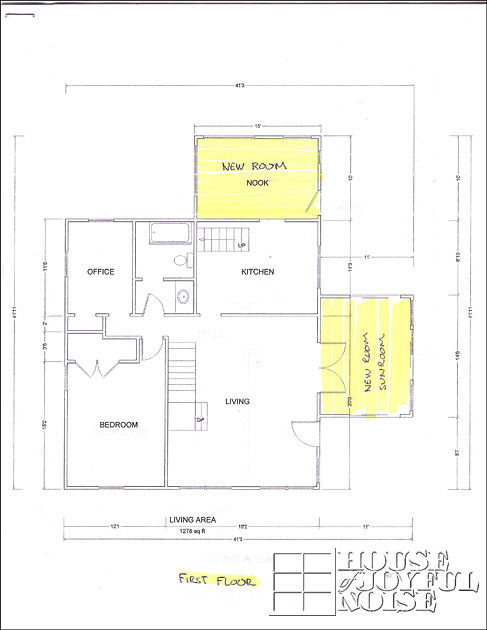 Now, in looking at the floor plan above, what is marked as an office was {A}’s existing room.  For anyone who has ever added rooms to their home, you may know that sometimes when you are working with the town, you just need to call some rooms something else. ; )

We were also planning to add a second floor, for the additional bedrooms we were needing. So…..the upstairs would be ALL BEDROOMS ; ) and 1 bathroom…. 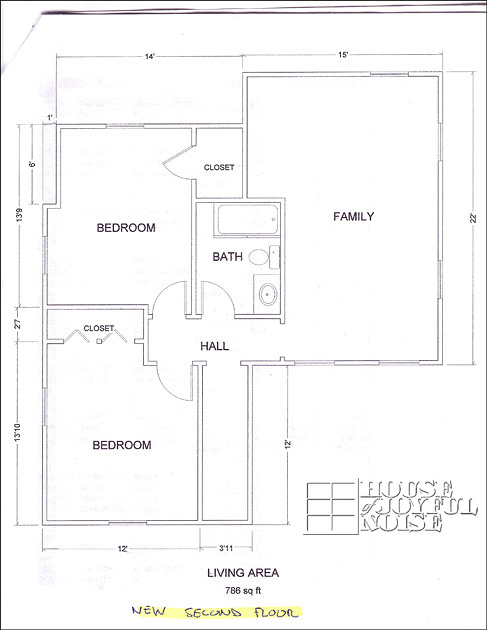 {A} would be moving upstairs, front left. {O} back left, and Boys on the right.  If at some point the boys want their own privacy, we plan to build a petition wall in this 22′ long room, to give them their own space. > UPDATE 2016:  The huge room on the right (marked OFFICE) was made into a dream art studio, and we put one boy’s bedroom along the back, with a barn door!

In our businesses, and especially in Michael’s business, a lot of his clients are tradesman/business owners.  So whenever we need anything done that needs to be hired out (which in truth is very little, because there isn’t much Michael cannot do himself), we look to our own clientele first.  Reason being, we want to support their businesses, just as they support ours.  We knew we wanted a very competent and experienced builder who had very high standards for their work, but we also had a budget to work with.  It was also important to us that we had a crew here working every day, from the start of the renovation to our home being at least weather tight.  There was one builder, named Stephen,  who was one of Michael’s clients (meaning Michael letters all of his trucks and makes site signs for him), that Michael really wanted to at least talk to.  To pick his brain, so to speak.  He’s a really nice guy, and very, very professional and knowledgeable, with a very experienced crew and a successful building business.   But, we didn’t think we could hire him, because he was very high end. The bulk of his work is million dollar homes.  Still, he was the perfect guy to get some much needed advice from, just to know where to even start.

After getting a couple of quotes from a couple of other contractors that have all been Michael’s clients, Michael brought his plans on paper, and met with Stephen.   Stephen had a whole lot of great advice, set us up with the architect he uses to make sure our plans were structurally sound.  He was really impressed by the drawings, and helped some with the overall roof lines. I guess in the end he got invested in the project, because by the end of that appointment, he was our new contractor and had agreed to do the job, with intentions of meeting our budget.

Now something that will prove to be very interesting to know, later on as this project unfolds in this post, is that in our mind, we had no intentions of leaving our home through the renovations, except for maybe a day or 2 if necessary, when they put in the stairwell in our living space.   But otherwise, we didn’t really see a need for leaving at any point, when we thought about it.  Sure, it was going to get a little messy and noisy for awhile, especially when taking out 2 walls of 2 sides of our exterior house, where they would be adding 2 rooms.  But we could deal with that!  Our excitement was much bigger than any inconveniences we had to go through to get to our dream house.  {A} had just turned 9, and the triplets were going to be turning 4 already.  So we could manage staying, in our mind.  Besides, we didn’t really have any where to go, anyway, that we could think of.

Michael started doing a lot of prep work, to keep our cost down as much as possible. Less man-hours, less $.  So the first thing he did was tear out the section of the deck where the sun room was going to go.  Then he started hammering and breaking up the chimney.  Now, the chimney was for a wall-inserted black iron coal/wood stove we had inside out living room.  We used it now and then in the earlier years of owning our home, mostly when we lost power and needed to heat the house.  But in time we stopped using it because of the rough state the chimney was in, with cracks and such.  It was a matter of safety.  So he started tearing down the bulk of the chimney.  Things were already a real mess.  You can see where the cracks in the chimney had heated the wall of our house up enough to leave black, on the couple occasions where we had a fire in the stove.  Thankfully we were aware of the issue to monitor it, but it was scary nonetheless. 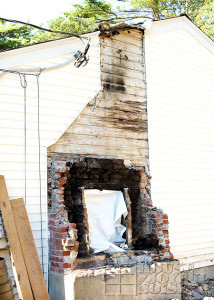 I will never forget the day the excavator showed up.  It was there, with an operator, to accomplish a few things:  Tear out the cement wall behind our house, tear out of the ground the stumps of trees we had taken down on the land behind that cement wall, to pull out the the lower part of the chimney and dig the trenches for the footings to go in. LOTS of work to be done.

First, I’d just like to refresh your memory about how cute and quaint our little yard was… 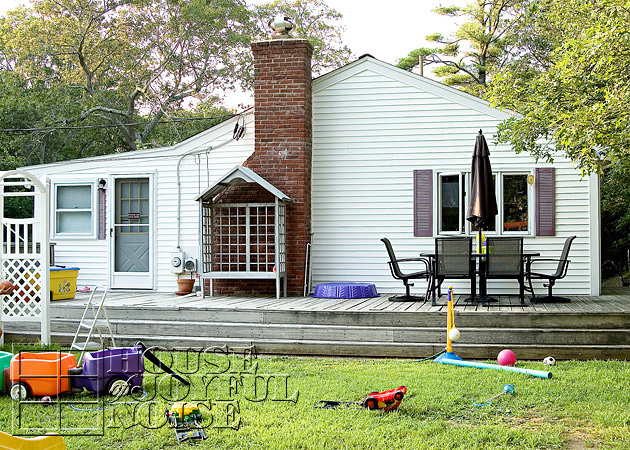 So they take down my little white picket fence. And then, this mammoth excavating machine crawls RIGHT OVER my beautiful ground shrubs and junipers and up into my yard !  Then…..it gracefully crawled across my green grass, leaving a path of completely unearthed destruction.  I will never, ever forget that sight, as I stood there with my mouth  hung open. 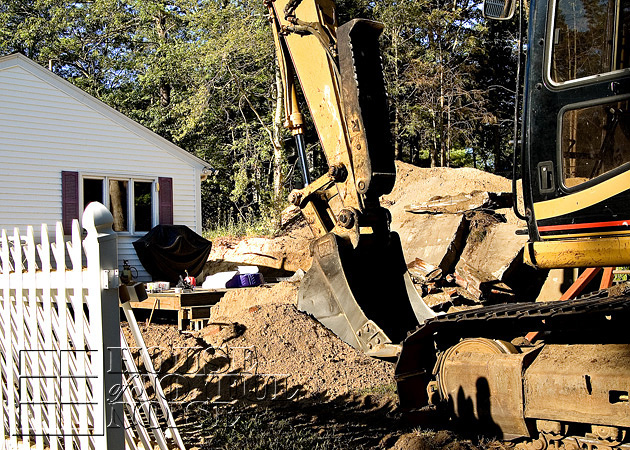 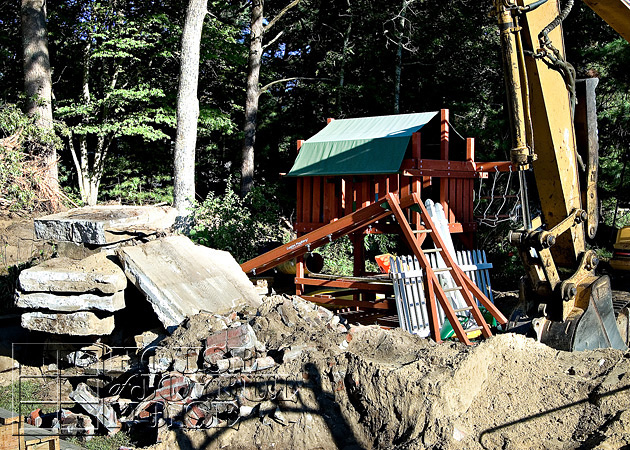 My yard would not be the same for a good long time.   It was really at this point, that the thought started creeping into my head, “Oh my Lord, what are we doing?  Look at the destruction of our home and yard!!“….and a little panic started setting in.  It was just hard to imagine things ever quite nice, or even livable again.  But oh…things were going to get much worse.  ; )

Now, just to sound like I am really side-tracking here for a second, I want to share with you that I have what I call, a few ‘tried & true’ parenting tips.  One is that I don’t believe it is going to serve your family life well, to have to keep it extra-extra quiet while your babies sleep.  In my opinion, with naps and such early bedtime for years, you will be spending an awful lot of time tip-toeing around and trying not to make a peep.  It could bring on anxiety, for goodness sake. lol.  So, I never did that.  When the kids napped or were gone to bed, we just carried on with what we were doing, most times with maybe some level of consideration.  But generally speaking, they were always able to sleep well through any noise, and didn’t really wake up for anything until they were ready to.  Some may agree with that, some may not, but it’s what we wanted for our family, and it totally worked for us.  Especially given the fact that, contractors were definitely NOT going to work around our kids naps, and our kids were definitely NOT ready to do without naps yet.

So here is my ‘proof is in the pudding’ moment.  (Well, their entire baby/childhood has been proof that they can sleep without perfect silence, but this is a hum-dinger of an example.)

The triplets were napping in the very next room, when Michael started hammering and knocking down the chimney.  In the next afternoon or so, they were napping again when the excavator guy and Michael pulled the stove right out from the wall.  It was noisy……hammering, scraping, the house was even shaking.  But the sleeping babes never even stirred.

A little while later, when they got up from their usual nap time, they sleepily walked out of their bedroom into the living room, to see a gaping hole where the stove and mantel, and instead could see their whole side yard.  lol.  Now, the photo below is actually several days after that event, when the mess was cleaned up and supplies started coming in.  But the look on those toddlers faces was hilarious.  They were confused and surprised, and they just stood there staring at the missing wall and stove, and sleepily wobbling. lol  It was the funniest thing.  We had some explaining to do. 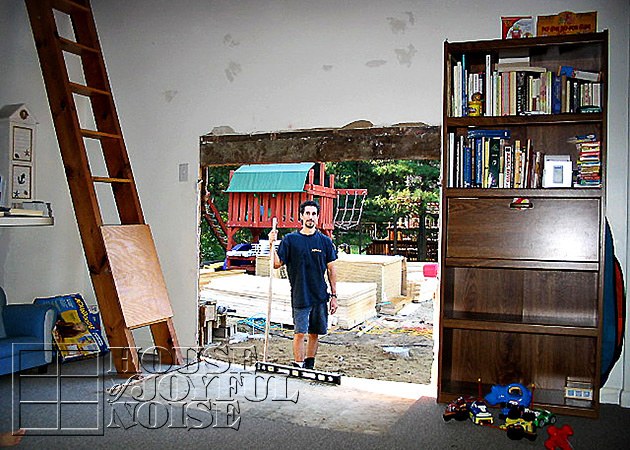 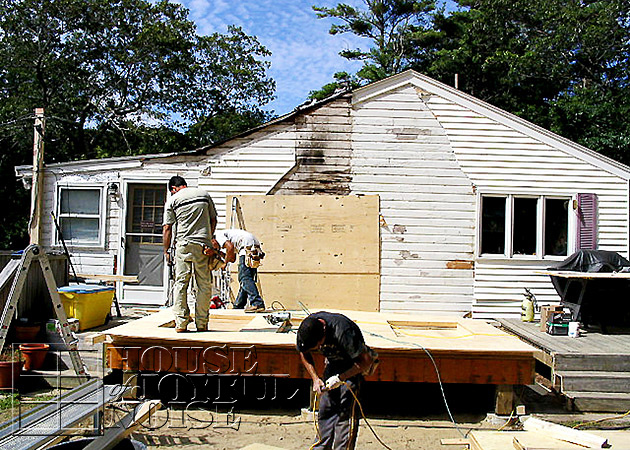 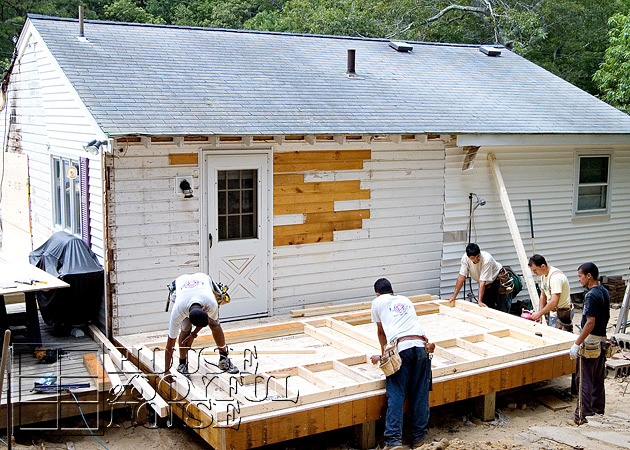 ….as well as the school room on the back of the house.   I want to point out too, that the house is looking particularly…..dumpy?  Because they had ripped off all of the white siding.  You can see where the siding is still on the house to the right of the photo.  It wasn’t looking THAT bad before the crew showed up and started tearing things apart.  Although the screen door was probably about ready to be replaced anyway. lol

In the photo above, they are actually framing out the back wall.   They really needed to have this room on the back of the house erected first, in order to begin the work of the second floor.  So it was done pretty quickly. 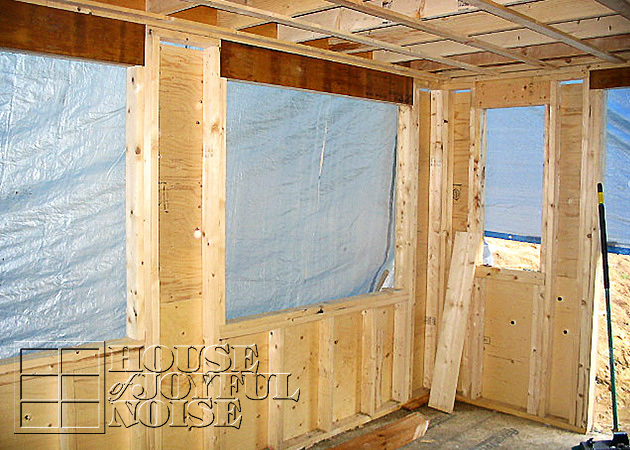 Here is the inside of that room, just sort of built off of the back of the house. 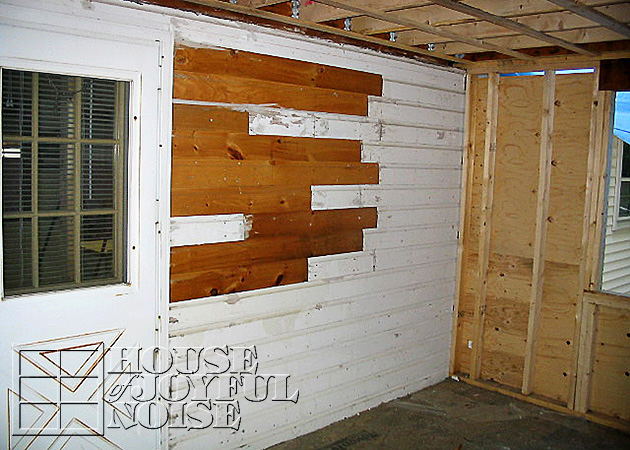 Same room, of course.  This door and half of this wall will be removed by the end of the project, with the kitchen being open to the school room.

This has been kind of a long post with a lot of reading.  So I’m going to leave off here for this Part II.  But from here, things are going to get ReALLy CrAzY!  That’s where we have some real story-tellin’ to…tell.  So stay tuned for Part III !!

Now is anyone reading this, or are you just looking at the pictures??  Because I am practically spraining my brain, trying to remember the details of construction, what happened first, next and why.  lol.  So please just tell me you are reading, too.

To be continued……Here, Part III