Anyone love Extreme Home Makeover??  Seeing home renovations start to finish? Yes??  Well that’s what you’re going to get in these posts.  The only difference is, we have to pay for ours!  LOL.

We mentioned that we would be having a lot to share in this section of  ‘Homestead – Home & Gardens’.   Gardening is something very new to us this year, but I like to think we started off with a bang.  I haven’t shared much of that yet, although I will be soon now, because that began a front yard transformation.  But the backdrop of that, is our house, which also was majorly transformed. So I just didn’t want to put the cart before the horse, so to speak.  One reason being, for those of you that will continue to follow us in the coming years (please?), it will be so fun for you to have watched our homestead grow and change  SO much, from the beginning! (Well, if you like that sort of thing.)  Because there has been such an amazing transformation in the years past already, but there is still so much more ahead.  But also, I just like to do things in order.  I have a real, serious, order thing.

One thing you may, or may not, have realized about us by now, is that we are very visual people. Some people are really smart.  Book-smart.  Number-smart. Build-and-run-a-corporation-smart.  Change-the-world-smart.  But none of that is us, we don’t think.  We’re just artists really.  What we DO do, is DREAM and CREATE the little things we would like to have.  We SEE them in our head.  We talk them out together as a team.  And then we CREATE them to reality.

Our home, though admittedly one of our bigger dreams, was one of those creations.  Now usually, we make everything with our OWN 4 hands.  But this time we needed quite a bit of HELP.

But let me give you a little history first, to add interest to the story:

Once upon a time, in 1995, we bought this little 2 bedroom  ‘beach house’, just a walk from a private seashore.   We had dreams for what we wanted in our first house:  a fireplace,  floor kitchen cabinets, a loft and cathedral ceilings in the living room. We drove around with some hot-shot annoying young realtor, and looked at one dump after another.  We found this one on our own.  We were looking in a newspaper, we drove to it, peeked in all of the windows, and drove to the nearest pay phone to call the realtor listed. (No cell phones then I guess.  Gosh…I can’t fathom that now.) He came with a key.  This little house had all of the things we wanted!  When I first walked in the front (side? lol….weird!) door, I swore the light of Heaven was streaming in through the skylights onto the floor, and I knew THIS was the house, and what I wanted, before I even saw the rest!  And there was my loft!  With a rustic ladder that climbed led to it!   It was shocking for anyone to walk inside, because the outside was very, very deceiving.  It also had a 11 ft unfinished basement.

Side Note:  Now this photo below was not taken until 2006 or so…..not in 1995 when we bought it.  At the time of purchase, it had no shutters.  We bought some beautiful berry colored shutters, which as you can see faded quickly to a horrid washed out pink.  So I just want to tell you:  Don’t get berry colored shutters!! In fact….anything in the red family is going to fade in an ugly way, faster than any other color.  But all in all, we loved out little home by the sea. As the years went by,  we thought maybe at some point we would add a sun room on the side of the house there on the deck (because the chimney was beginning to crumble after owning the house for 10 years, anyway), but…..we loved our little home just as it was. 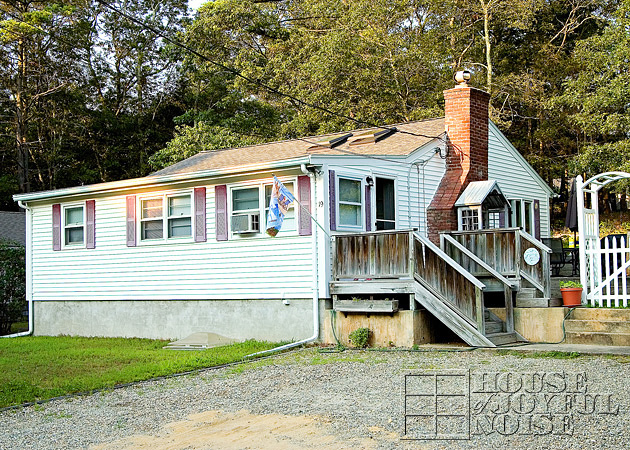 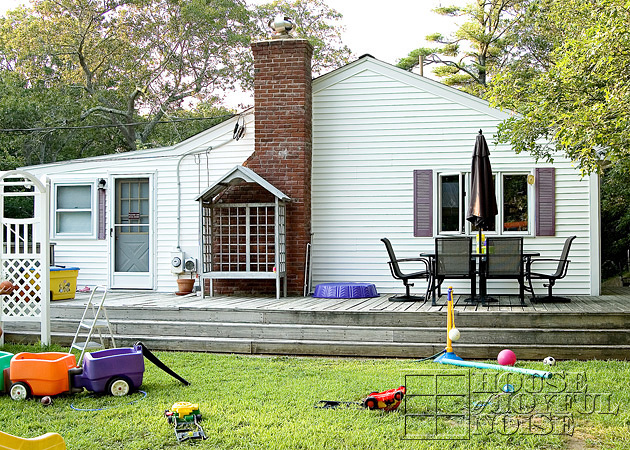 Soon enough, we had a baby daughter in that 2nd (TINY) bedroom, and the unfinished basement was finished on one side (by Michael) to be my photography studio.  We were hopeful for another baby, and decided we would ‘make-do’ somehow when God sent another blessing to our family.   We could worry about any blessings He had planned for us after that (in terms of room in the house), later, when the time came. We figured,  let’s just have #2 first, and we’ll be quite fine for awhile until, God-willing, #3.

But when we discovered we were expecting again, a few years there-after we discovered we had #2, #3 and #4 on the way! Triplets! Triplets? 3?  Whoa.  Almost immediately, I ended up on full and complete bed rest for the duration (for concerns that started so soon).  That ended up being 6 months, in-my-bed.  (All of which time I just prayed, ate and drank. )

Now here is something to make you laugh;   we went into a bit of a panic, still being in shock with the realization that we had 3 babies on the way, and just thinking about the little house we lived in.  There was no time to buy another house and move, and we didn’t want to move anyway! So we started planning to just hurry up and have our home reconstructed before the babies were born! HA!  It was so very unrealistic and impossible to accomplish such a thing in that time frame, and especially under those circumstance. We decided we had to wait until AFTER the babies were born. ANOTHER LAUGH.  Because of course, once the babies were born, we didn’t have time to even make a phone call to a construction company!  We were too dang busy feeding, changing, burping, bouncing, bathing babies!  It was a never-ending schedule.  Even once that slowed down as they grew….we had play yards, high chairs, toys, bouncy seats, car seats, you name it….all over the house. But as those little blessings grew, and we were able to catch a wink of sleep enough to be able to THINK straight now and then, we began to DREAM again. We talked a lot about our ‘dream house’ for our family, working with what we already had. (Which we loved. But it was just too dang small now.)   We talked, and talked some more, brainstorming, planning, and soon we could SEE all it in our head very clearly.

But as you all know, Michael plans everything on paper: 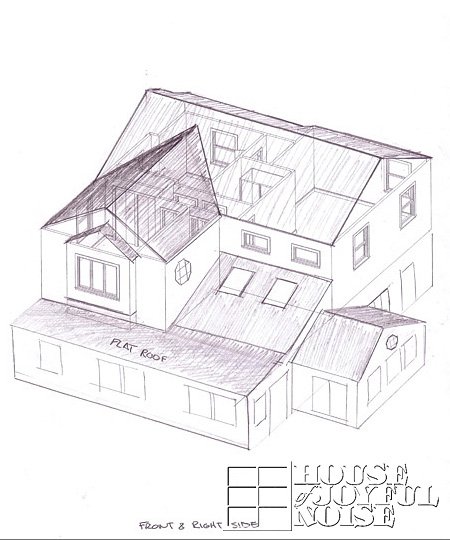 Come along for the journey, as we show you how went from this beach house/cottage, to our farmhouse-style dream come true.
Do you think you all will enjoy this??  Let us know!