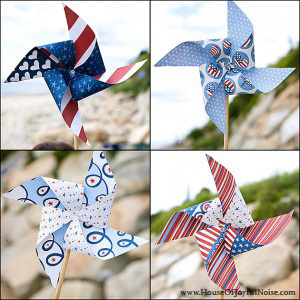 We had some guests down a couple of weekends ago, and while they were here, the kids and I got to making pinwheels.  O.k., in the end, it was mostly me really working on them.  They needed to be fine tuned, to work properly.  Making this quick little craft was on my agenda, so I already had the supplies.   The kids who visited us each took one home.

Ours has served mostly as home decor, since then, being the time span between Memorial Day weekend, and the 4th of July.   But today we took them down to the sea shore to really test drive them! 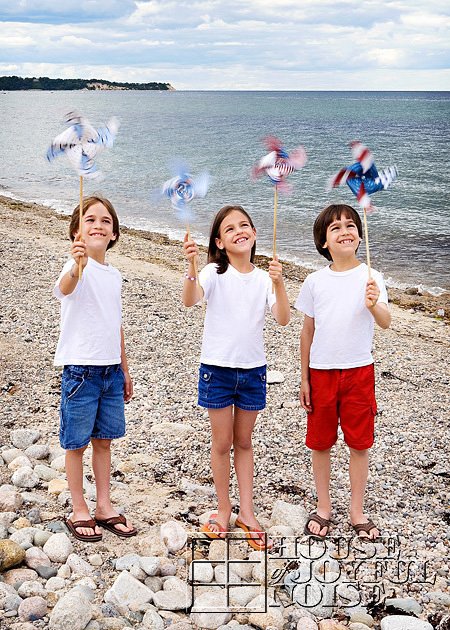 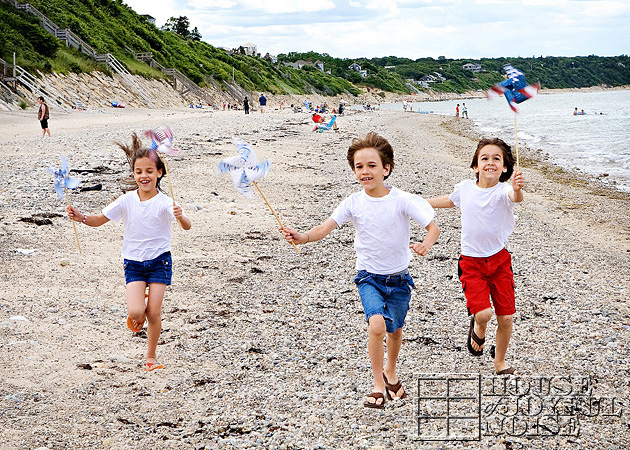 The kids even ran like the dickens with them, to really get those pinwheels spinning. 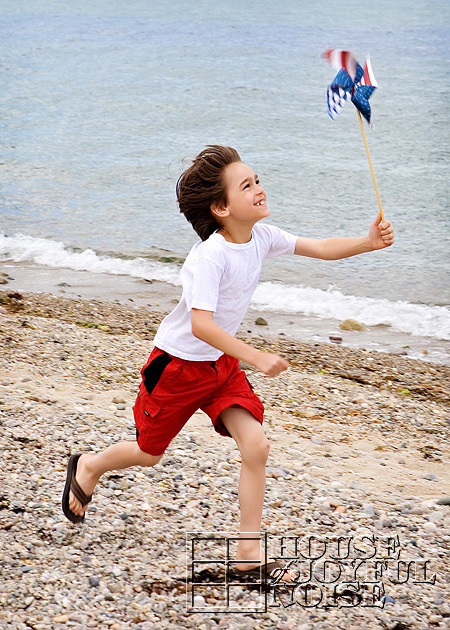 I was impressed with how fast the kids could run, with flip flops on, on rocks no less! 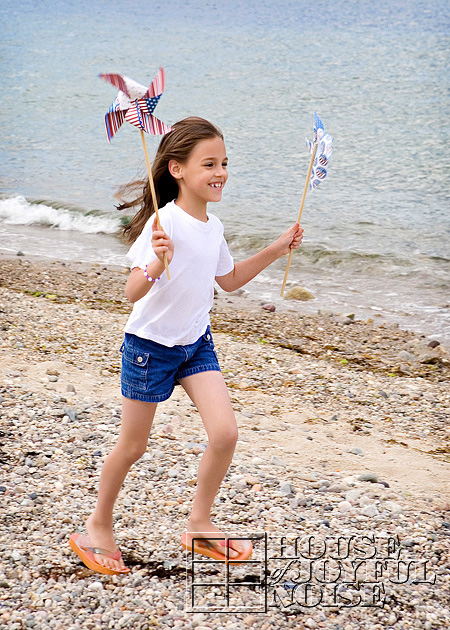 Well, maybe except for {O}.  I’m going to be honest here.  My girl runs like a girl!   Even when she has brand new sneakers on, that are supposed to make you run faster than ever, right?   ; )   She has the daintiest run I have ever seen.  But you know I love her.  Running fast isn’t everything! 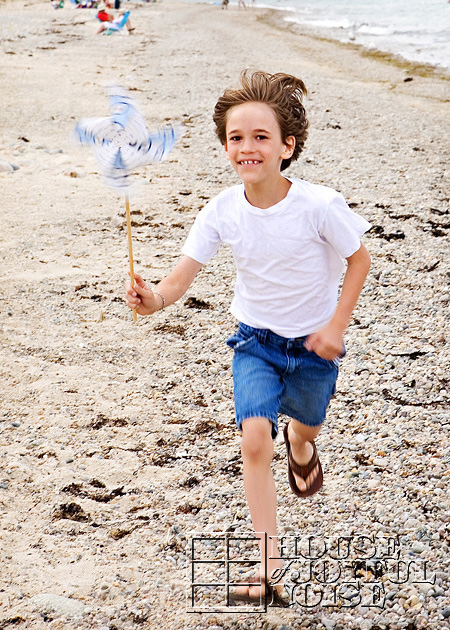 Well, maybe to this one, it is.  He is another story.  {S} is definitely the runner of the family. He runs, and runs, any chance he gets.   Sometimes, when he shouldn’t.  To see him walk, when he really wants to run, is so comical.  (Well, to me as his mother, who knows him better than anyone else on earth.)   It takes everything he has within himself, to keep himself from running.  He truly needs to concentrate on every single step.  This is my boy who probably shoots an average of 1,000 hoops a day.  He really burns it up.  Look at that pinwheel spin! 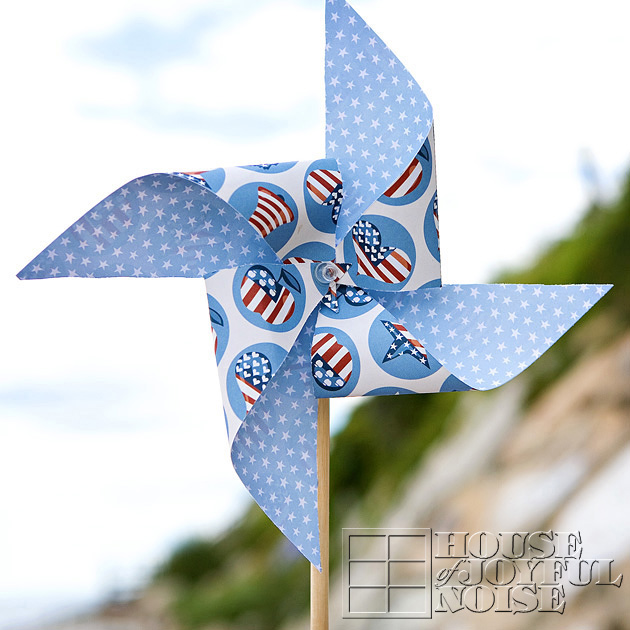 Making these is really so easy.  You start with square sturdy / heavy weight-ish paper.  I found American-themed 12 x 12 scrapbooking paper at, where else?,  Michael’s Arts and Crafts store.  I was thrilled there were several patterns, with different patterns on the back sides.  Can you say perfect?! I can.  I did.  I bought lots.

If you don’t know or remember the specifics of how to make a pinwheel, (as I did not) you can follow some general directions here.   I had my heart set on making some real Mack-Daddy pinwheels, so we started out using the full 12 x 12 sheet!  But guess what?  They didn’t work.  Hey, I’m no engineer.  12″ was too big, too floppy, too much.  That’s why I ended up crafting by myself in the end, fixing them all!   You think I’m going to let one of my crafts fail?  Heck no!  People talk!  These babies were going to spin like the dickens, and no one was leaving until they all saw it happen! 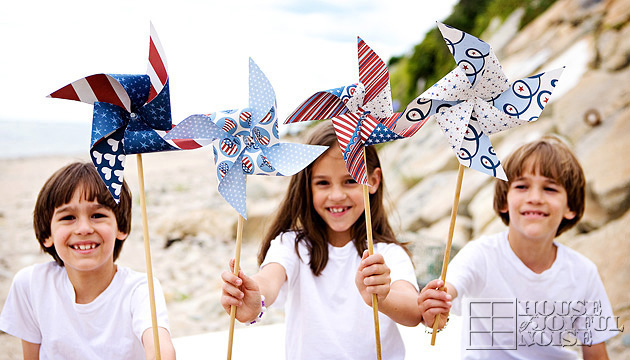 • When you are making them this big, and cut the paper from each corner of the square toward the middle, it’s important to really stop 2 to 2.5 inches from the center, with every cut.   What’s more, I also took about a 2″ inch square of paper from the scraps, and sticky tabbed it good to the center of the back of the pinwheel.  This really gave it some better re-enforcement, and spinning power.

• Also, I used sticky tabs, when bringing every right-side corner to the center of the wheel, between every layer.  That makes it a lot easier to hold it together until you put the pin through anyway, but again, it gives it a flatter surface in the middle to spin better.   We used push pins, and 1/4″ dowels, sticky tabs and square heavy paper. 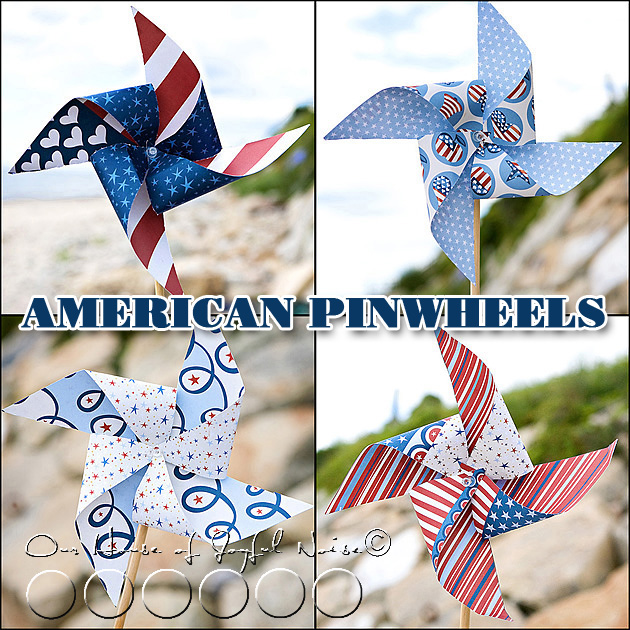 The kids will be taking their American Pinwheels, and Liberty Shakers, to the parade and the fireworks this weekend.

We’ve got a full agenda for the long holiday weekend. A good mix of fun, relaxing (lol, we try but we’re not so good at it), celebrating, and of course…working around the homestead.  There will be SO much to share with you, when all is said and done!  What are YOUR family plans this 4th of July weekend?  We’ d love to hear how you plan to spend it!   Be sure to have fun, and stay safe!