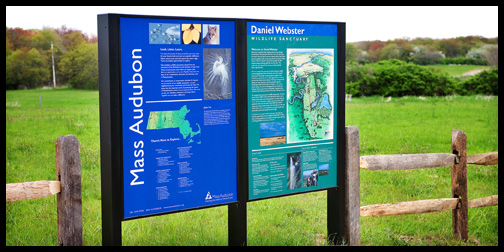 The kids finally had their real science field trip, to the Mass Audubon Society Wildlife Sanctuary, on the RIGHT day. Michael and I were not as excited to go anymore, feeling like we’ve ‘been there, done that‘.  But the point was to meet and experience a homeschool co-op that was having a day there, and the kids were all for going again.  So we went, and were all really glad we did. I must say, the weather wasn’t quite as nice as the mistaken day, which was so warm and sunny.  This time it was on the cool side, and pretty cloudy and grey out.  Rain was expected later that day.  (And it indeed started sprinkling before we left.)

But what a great field trip it was anyway! As I mentioned in the post about our accidental trip, the place consists of tons of conservation land, which includes various kinds of habitats:  grass plains, marshland, and ponds.  These habitats are home to all kinds of birds, animals, reptiles and amphibians.  There were experts there from Mass Audubon, who took us in groups and taught us and showed us so much.
I didn’t really get any great photos.  Again, I would have needed that big tele-photo lense for some really fascinating shots.  But also, our kids were always in groups with other people who may have not wanted their photos taken, and it wouldn’t be right to post them on my blog with their faces showing, (without permission either)…..so my camera did a lot of resting.  Although I did get a few simple photos, one of course of the boardwalk bridge, which I probably took one similar last time too.

The first thing we did was go out on a tractor-pulled wagon hayride with a group, and a very nice and informative woman who was a wildlife expert, right out into the grasslands, where she taught us much about the birds that habitat there. The little ones enjoyed the ride, and learned quite a bit just listening to the talk. {A} brought along her notebook and sketchpad.  Remember I told you {A} was ‘a bird expert as far as I could tell’?  Well, she’s a bird expert as far as a bird expert can tell, too! lol.  The woman had large laminated cards of various kinds of birds, not all the kind we see every day in our own yards.  The woman often started with ‘Does anyone know what kind of bird this is?’, and {A} always did.  She also knows more about their behaviors than I even knew she knew. The woman was impressed! Some of the birds we saw and/or learned all about were Osprey, Red-Winged Blackbirds, Swallows, Bluebirds, Flycatchers, Bobolinks, and Orioles, as well as red and grey fox, raccoons, and some rodent of which I forget the name of or what it really looks like. (Maybe on purpose. lol) )   We saw LOTS of Bobolinks darting around, there was an Osprey there as well, and we learned that Orioles fly all the way to and from South America every year! (Wow!). We have seen them in our yard several times in the past couple of weeks, and I just LOVE them.  The woman said if we put a string out on our deck, the Orioles will take it to build a nest.  If we put one out every day for them, they just may build there nest in your yard and stick around for the whole season!  I definitely want to keep them around….so we did just what she said today. But it was still there last I checked. 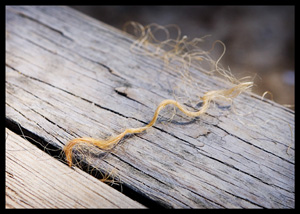 When we got back from the hayride, we learned about bird-banding Tree Swallows.  The woman explained how they catch the birds, how they harmlessly band them, measure their wing span, weigh them, record all of that info, where they send, and why.  She had different strings of leg bands, as shown below, each of all the same size, but with different identification numbers on them.  It was fascinating to hear the woman tell us how some years she would have birds she had banned the year before come back, or get notice in the mail from another sanctuary that a bird she had banned had been at their habitat thousands of miles away. 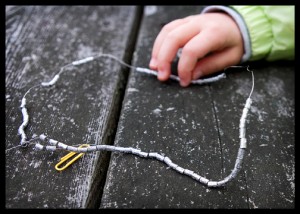 After that little information session, the kids moved on to learn more about bugs and insects. They even went into the tall grasses to catch some in fabric nets, put them in containers, and learn more about exactly what they caught. (You can bet I did a tick check after that little activity!)  After {A} transferred what she had in her net, into a container, she discovered she caught syphrid flies, aphids, a spider, beetles, and ants. Did you know there is a difference between bugs and insects? 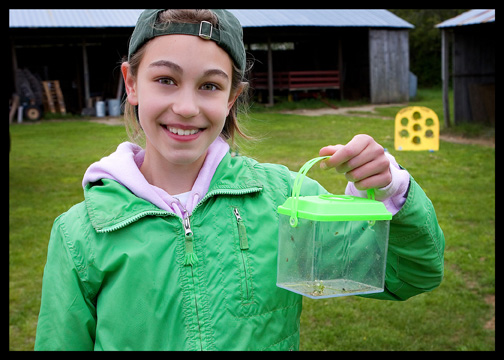 There were games to play, a bubble blowing table, and a little craft table as well.  The kids made these dragonflies out of pipe-cleaners, beads and tinfoil.  Pretty cute, huh?  I don’t think they’ve much put them down since. 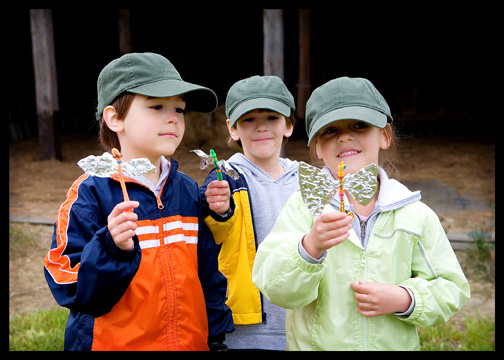 All in all it was a fantastic day.  We all learned LOTS, had FUN doing it, and met so many wonderful people.  There’s another co-op field trip coming up soon too…….a tide-pool study at the ocean, with more Mass Audubon experts there!  We have a few of our own field trips planned as well, but I am sure we’ll be sure not to miss the co-op tide-pool study! The kids will really, really LOVE that, and so will us big kids! We love the beach and ocean, and feel so blessed to have a private beach within walking distance of our home.
The next day, {A} had a parish youth group activity planned.  They were having a beach clean-up, and then gathering at the parish center for a cookout and some volleyball.  It initially was cancelled that morning because it had been raining and was still drizzly.  But some kids showed up anyway, so the leader called {A}, and she was happy to go and help. I did not take photos activity either, because I didn’t go.  Michael took her.   But I did some shots of her ready to go (one of which is below) with her own trash poker stick, and one to share.  She had a really great time, despite how the weather was less than ideal at first. Of course she makes everything she does fun.   The sun did break out once they were done cleaning up.  As if God was pleased with their work.  : ) 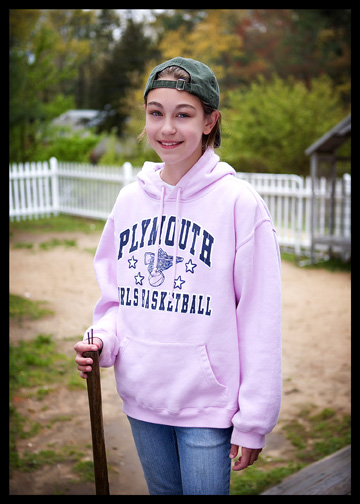 The rest of our weekend was spent doing some work, some house-cleaning, and some shopping.  You have no idea how excited our kids can get over bubble wands and water-shoes!  Good golly. We are all knee-deep in enjoying this warm weather season, and still have so much exploring, learning, relaxing and FUN to look forward to.