I don’t plan on having a big post on our Halloween/Hallowtide this year.  But last night I got to thinking about some of our past Halloween costume ideas we’ve come up with, and I went digging through photos. Putting together costumes, is a creative process of sorts, so we thought this section of the blog was a good place for this.

There is SO much I could share with you from our pre-blogging days, because I have always taken lots of photos.  But I haven’t always shot digital.  The scanning of old photos, and cleaning up dust particles, etc, is not a process I enjoy. At all.  But if I’m inspired enough to share with you some old stuff, I guess I will do it.  As I just did!

I thought it would be fun, to share with you some of {A}’s Halloween costume photos from when she was little, as well as the triplet’s second Halloween, but first in costume.  Naturally, we think they are all so cute.  But then, they are all our kids. Maybe we’re bias. But something tells us you might get a chuckle or 2 as well, looking at these.  Or we might at least get a smile out of you, and that’s good enough for us too. 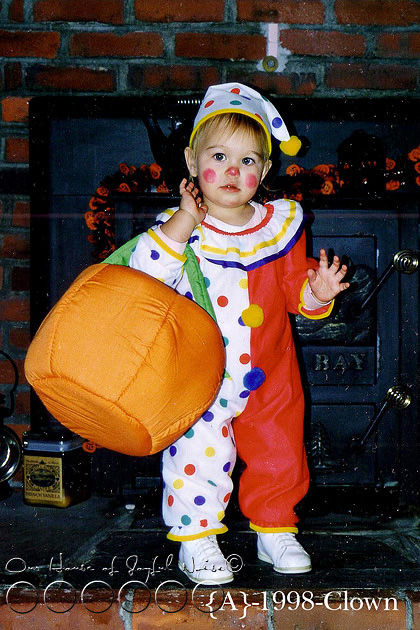 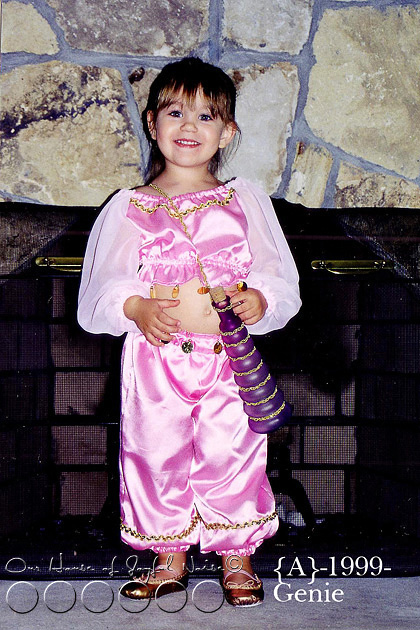 In 1999, as a genie, and 2 years old.   Is she not the cutest thing?  My sister-in -aw made the costume for us.  I helped cut fabric and stuff though.  And I also made the bottle.  I have to admit, I’m not into allowing my girls to jaunt around with bare midriffs anymore.  But I wouldn’t give up this photo of her at 2 year old, in this costume, for anything.  What a doll she was.
– 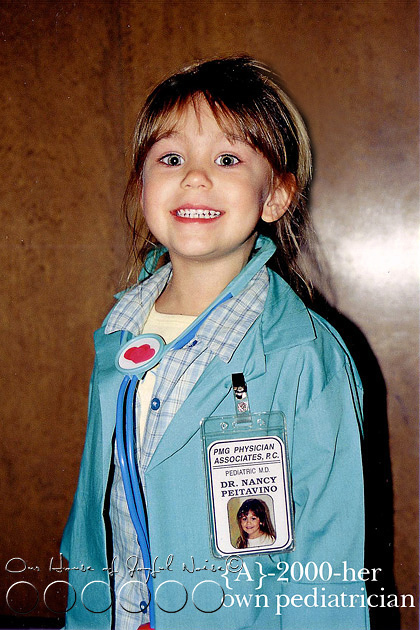 In 2000 at 3 years old, she was her own pediatrician, at the time. lol.  We have had a new pedi now since I was pregnant with the triplets, and the former one is no longer practicing, that I know of.  But she was beyond ecstatic to learn that {A} was her, for Halloween that year.  She (the pedi) showed everyone in the office that day, while {A} waited in her paper gown. lol I think this photo is still hanging in the office there.
– 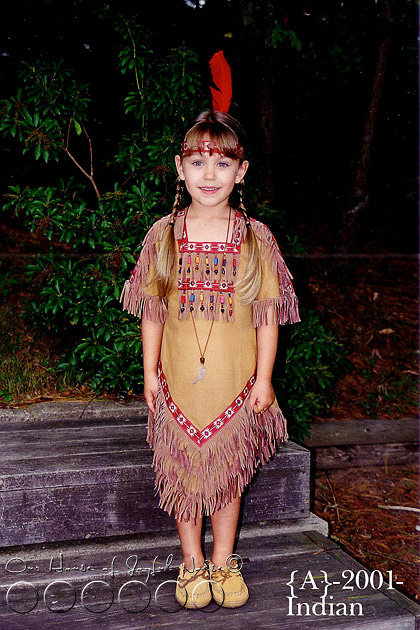 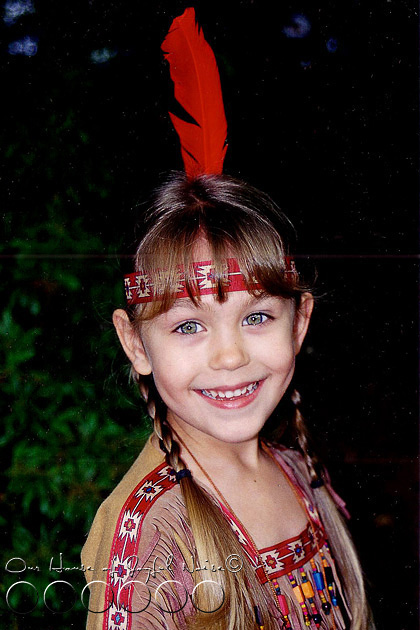 But this head shot, is one of my all-time favorite photos of her when she was little.
– 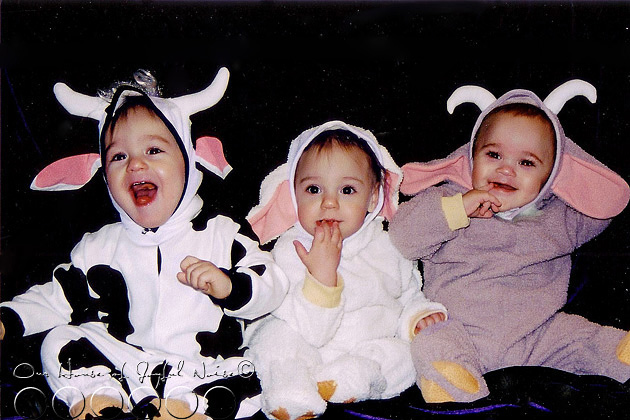 And then we had our little farm animals, in 2003.   lol.  They were 1 year old.  Remember the Tom Armani costumes?  The kids were a riot in them.  We had so much fun this year.  {S}, on the far right, was just on the verge of another hysterical laugh.  He would always, get laughing so hard, he couldn’t compose himself.  He still does that.  He was a happy baby, all of the time, despite all he went through.
– 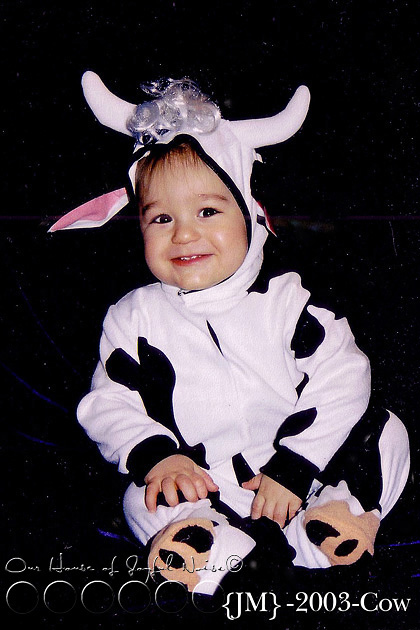 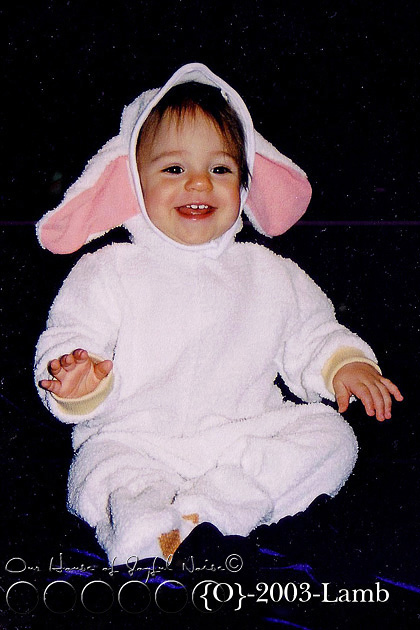 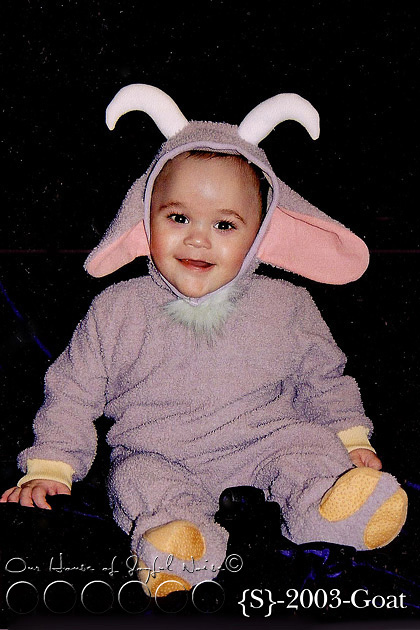 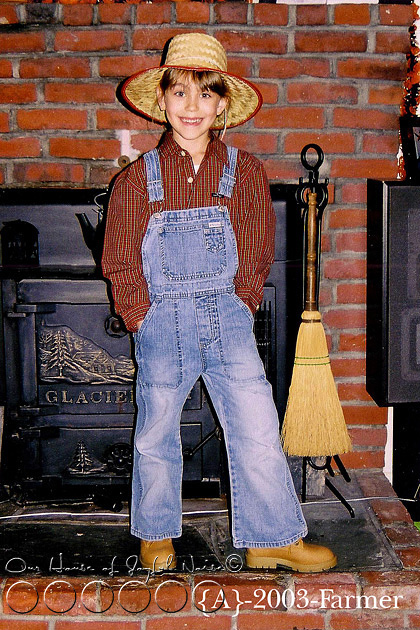 {A} (big sister) was their loving farmer, who tended her little farm animals with such care.
–

We just had to show them all off, and trick or treating is always out of the question for us (with {S}’s severe peanut allergy)….so we thought we’d take them to the mall, and just pull them around.  There was Halloween festivities going on there anyway, and it was warm, light, and safe.

And from that idea, our idea grew…. 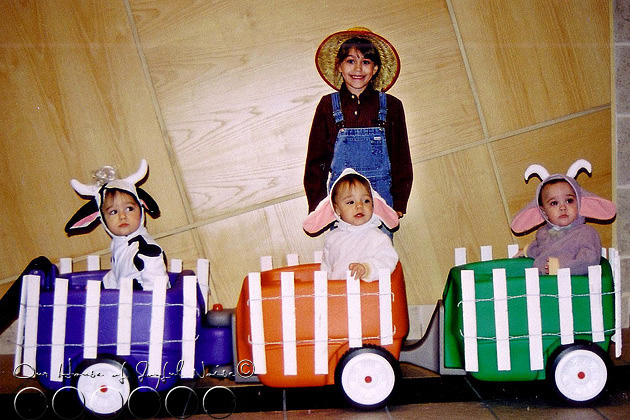 We put a little picket fence around our farm animals, in their ‘choo-choo wagon’.   They were the biggest attraction.   People just stopped, and watched us, cracking up.

The funniest thing that night, that still gets us hysterical when we think about it, was that {S}, was the billy goat, and every time we looked back as we pulled him, he was chewing on the fence!!  I was always laughing too hard, to get a photo.

Then we heard there was a costume parade judging contest at the other end of the mall.  So we went down there and pulled them through.  There was a big crowd, and then we had to go by this whole panel of judges at a table. They were all so smitten with our farm. 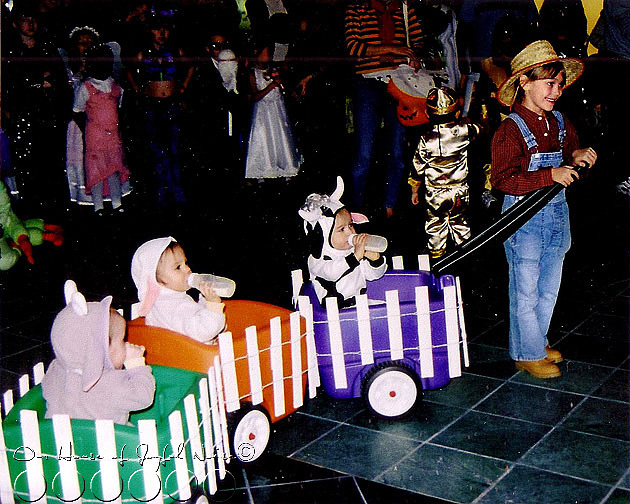 We won 1st Place,  for Most Original Costume!

The judges thought our farm yard was very creative.  The farmer and her little animals had a fun night, and then they went back to the farm and went fast asleep in their barn.

If you have blogged your kids in some of your favorite Halloween /Hallowtide costumes, leave us a link so we can come see them!  If you haven’t, wouldn’t it be a fun post?

Thanks for stopping by.  We hope you enjoyed seeing our kiddo’s costumes from the past, as mush as we enjoy revisiting these wonderful family memories.

Wishing you all a Happy Halloween / Hallowtide!!