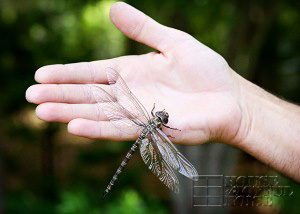 It’s Friday afternoon, and a beautiful summer-like day.  I was doing some stuff around the house, with all of the windows open, and the kids were all playing outside, when I hear {JM}, “WOW!  I just found a really BIG dragonfly! Guys, come look!”.  I was chuckling at how loud he was yelling, with such enthusiasm, and wondered if the whole town might come running. I slipped on my flip-flops, sauntered out there, and saw Michael was already at the site of said-dragonfly.  He said to me as I headed over, “You didn’t bring your camera?”  My plan was to judge for myself, if it was camera-worthy. ; )

I took one glance, and…..Yup! It was!!  I went and got the camera, hoping it wouldn’t fly away before I got back. 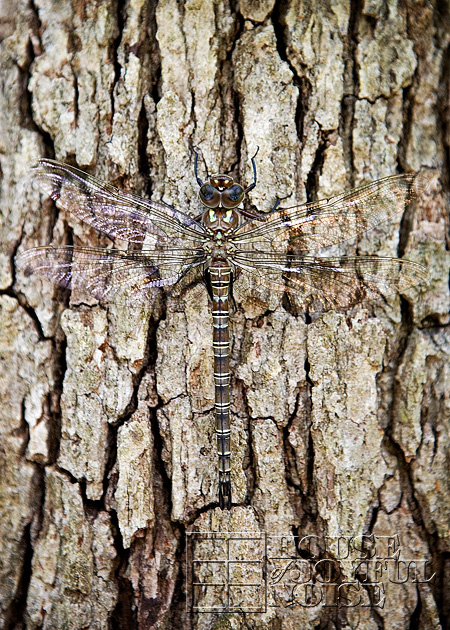 It looked like it had no intention of moving, any time soon.   It was huge.  But I knew you wouldn’t be able to tell the scale of it,  in a photo of it, on a tree.

So Michael put his big man-hand beside it…. 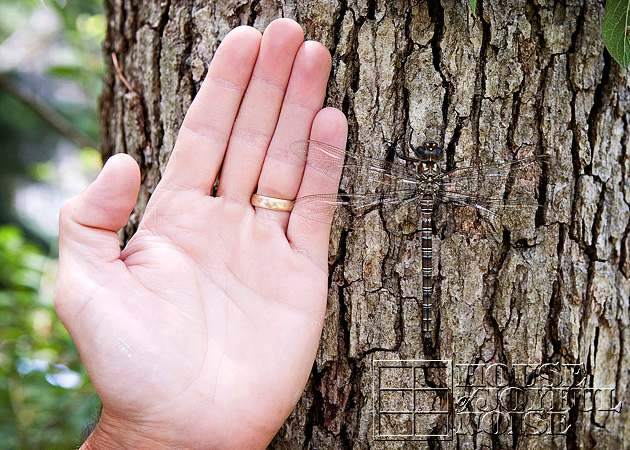 After I got those shots, Michael was dying to get it on his hand.  He managed to very gently…. 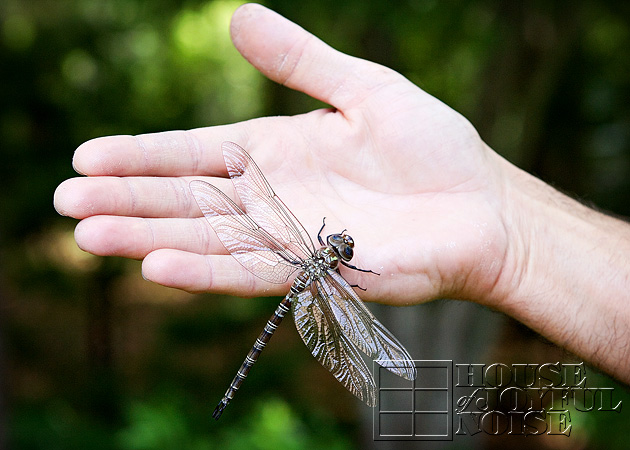 Just LOOK at the size of that thing!!  It did flutter it’s wings momentarily, and it honestly sounded like a bird’s wings flapping.

Maybe it’s common, but we’ve never seen anything like it, in our lives.  Have any of you New England folks ever seen one like this?  Do they grow this big in other states?

If you know what kind it is, or even have a guess, please let us know! 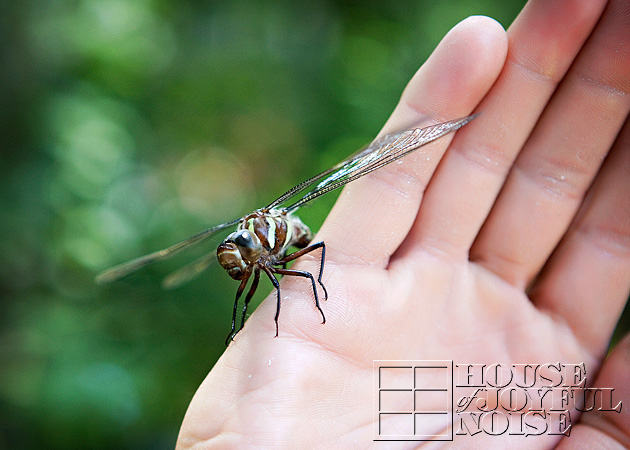 We’ve been trying to research it, and figure out what the species is.  But I haven’t yet been able to find a photo that matches it.  We’d love to learn more about it.

Is it possible to have a ‘dragonfly hive’ in your yard, like some have bee hives?

THAT would be so cool, huh? 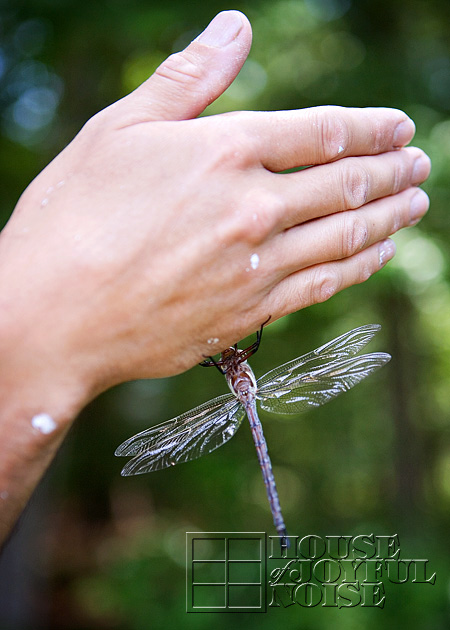 One thing is for sure:  God’s work never ceases to amaze us.

BTW, yes, Michael has been painting, among 100 other projects we’ll be sharing with you soon enough.

Thanks for dropping by, and sharing in our marveling at the wonders of nature!

This past weekend we headed up to NH for a few days, to have a visit with the kids paternal grandparents.  They have a park model at a lake resort, in a beautiful wooded area.

The kids had a lot of fun just hanging around at the camp during the day, taking walks, feeding the fish at the stocked pond nearby (no fishing allowed), and just enjoying the great outdoors.  We had campfires every night, which are always special to us, and the kids fell deep asleep at night, (after fighting the sleep too long), in their cozy sleeping bags their grandparents surprised them with for their birthday, when we arrived.

The food is always good when Grandma is in the kitchen, so we all enjoyed the meals!  But probably the highlight of the weekend was when Grandma and Grandpa took us to a trout hatchery fairly near-by, for the kids to do some fishing in the stocked pond there.  It was loaded with rainbow trout, and you could see every one in the clear water.  Seriously, the kids would no sooner cast, and they would get a hit, and would see the fish bite their bait. lol.   It was mostly the smaller, more ignorant trout that bit, but pretty good sized no less. The catch was (no pun intended), you had to keep what you caught.  No catch-and-release there.  The kids were catching them one after another, with {O} bringing in the most. Then we found out the cost per trout was $5!  Good thing it was Grandma and Grandpa’s treat!! We are guessing that any patience the kids had developed about waiting for fish to bite, in the course of their many, many fishing trips since early spring, are likely undone after this experience!

So, in the end the kids caught their own dinner that day!!  Some of the fish were given to some other family we had a nice visit with when we got back to camp.  But the rest was cleaned, coated and fried over an outdoor grill, and eaten for dinner.  The little kids really liked it!

The whole fishing experience was quite educational with the little kids though.  One of them, who is known to have ordered baked scrod in restaurants more than once, was a little bit bothered by seeing what was being done to ‘God’s creations’, having seen for the first time the process how fish become food, for us.  This prompted a great discussion, or two, about the Biblical fact that God put the animals on earth to help sustain mankind, and to help balance all of the rest of his creation, in some amazing cycles of life.

It was a great family weekend together, for all of us. With the kids grandparents living quite far away year round, they don’t see them often enough.  The memories that were created for the kids this weekend, having spent such extended quality time with their grandparents these few days, we know will always be remembered by them.  The events will be brought up between them in those “Remember when…?” stories for many years to come. And no doubt told to their own children.

Bet you’re wondering where all of the photos are, huh??  Believe it or not, all I took was several shots of the dragonfly above, that just kept returning next to my side, out on the dock at the lake.  So that’s about all I have to share.

Thanks for dropping by!