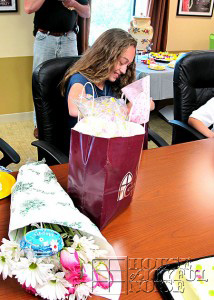 {A}’s birthday wish, was to visit the CatholicTV station, in Watertown, MA. Now, some of you may or may not know, that we are a little familiar with CatholicTV, by having become friends with Fr. Bob Reed, who is the director of CatholicTV, and who also helps out with presiding over Masses at several parishes, including our own.

{A} was the first to develop a real friendship with Fr. Reed, as a result of the frequent masses she served, and the time spent with Fr. Reed in the sacristy.  That led to Fr. Reed asking us to be part of the pilot episode of a new show at CatholicTV called House & Home, which was filmed in the fall of 2008, and aired in the summer of 2009.  (It was a new show; they had a lot of ducks to get in a row. So we embraced our last bit of anonymity in those months. lol)   Since then, Fr. Reed has remained a treasured friend of our family. He’s such a cool guy. So, when {A} e-mailed him (as she does on occasion), to request a tour of the CatholicTV station for her birthday wish, Fr. Reed responded quite quickly with her granted wish. He also said he would personally give us the ’25 cent tour’  himself.   He said that the actual 5th would not work, but the 6th would be great.  He also asked that we be there in time for the ‘This Is The Day’ morning show taping.   We soon realized (when he called us later) that he wanted us to be part of the show too. Oh. lol. Now, one might think I’d be getting used to this being taped for television business, but no so much.  A little racing heart comes along with knowing your children will be taped for live TV….you know?  As we said, we really are not like that mylar balloon family.  But..anything for Fr. Reed.

As a side note, {A} and Fr. Reed have had another special connection, in that her actual birthday is his anniversary of ordination into the priesthood.  This would be his 25th year!!   So, we were happy to go the day after, or whatever day worked for them. The 5th was a legal holiday anyway. 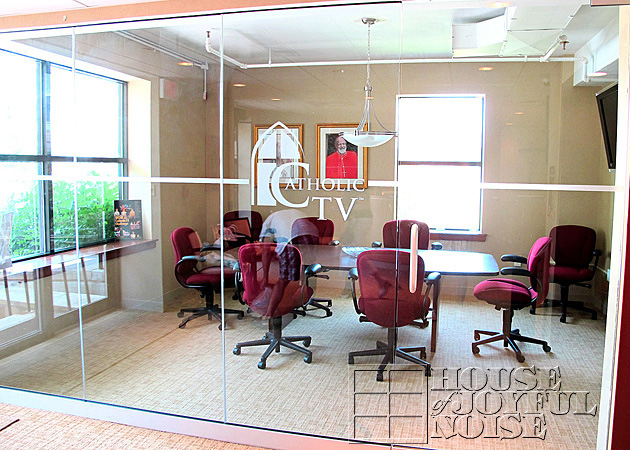 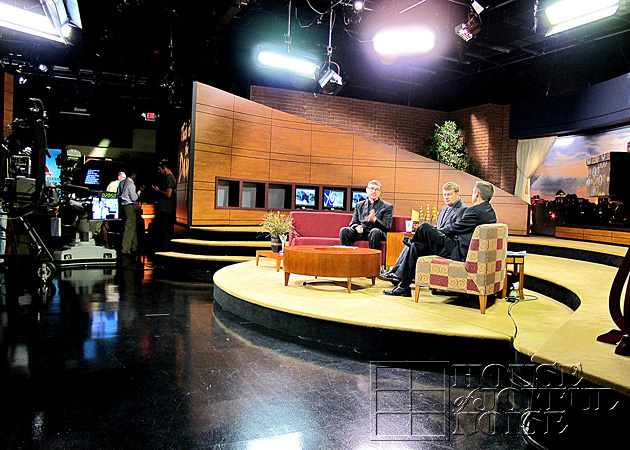 On the set of ‘This Is The Day’.  Now….I had never been on the set before, but I had watched the show.  I assumed, (and you know how that goes…), that there was a small audience whom we would be part of.  You know, maybe a few rows of those seats like at the movies.

No. Six folding chairs, set up just for us.  Oh my.  Right next to the cameras, lights, and overhead microphones recording the live show.  As I sat there next to my 4, occasionally spontaneous children.  Yes, I had given them a brief pre-chat in the car on the way.  But looking around, and as I heard the director countdown to the live taping “6…..5…..4…..3…..2……1…..<point of finger>”…..it warranted a moment of eye contact with my little blessings, that said “This is alllll business, Kiddos, but go ahead and enjoy it too! <wink>”….without saying a spoken word. 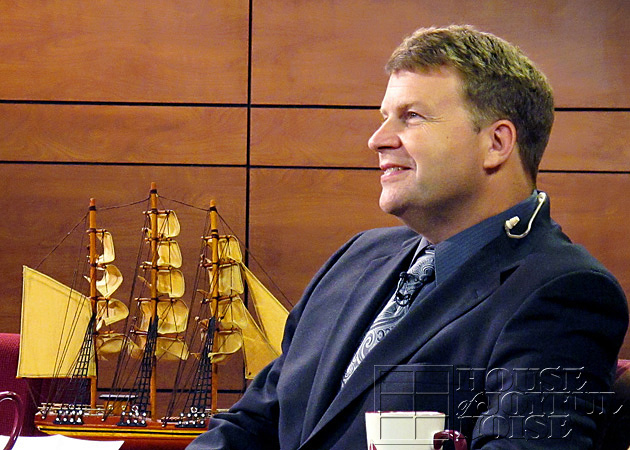 Here is Jay Fadden, host of the show, and side-kick of Fr. Reed (or is the other way around?)……who is as smooth as ice, with cameras rolling, just like his side-kick.  I tried to listen, observe, and learn all I could through the first few segments, before WE were up there.  No, I hadn’t necessarily learned all I needed to know (or would be nice to know!), the first time around, with all of this TV business.

But I digress.  (Or..did I?  I forget now.)   But see the Mayflower on the side table there?  They put that out in honor of us being there on the show that day!  How sweet is that?  I’m not sure what it meant, that it continued to be there for several following shows but….still!

So how and in what way were we part of  ‘This Is The Day?’  Well, if you have ever watched the show (because CatholicTV is a nationwide cable television station), you might know about the ‘Catholic Treasure Box’.  At the start of this show, that airs Tuesday and Friday mornings, Fr. Reed presents a riddle, to give clues to what answer may be in the Catholic Treasure box.

So this day, the riddle was as follows:

Parents and children, in home secure, we find the church’s most humble form. 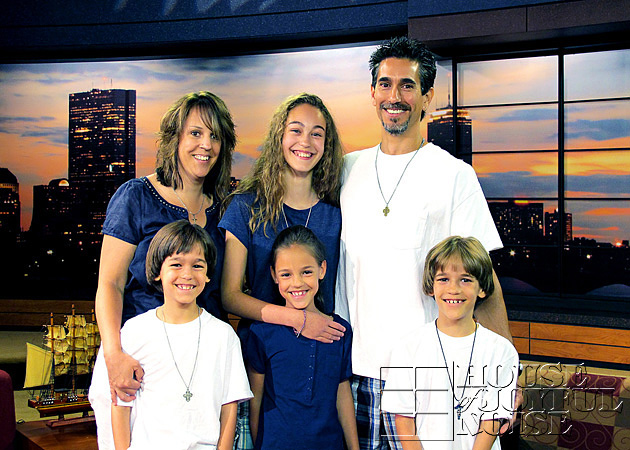 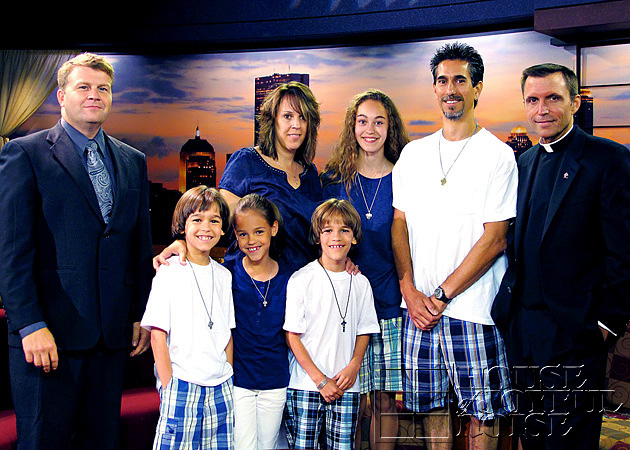 We sat on the couches, did a little segment chit-chat, they took several photos of us, and then we got on with our tour.  I’m not going to link you here, because really…..I wouldn’t assume you want to see it.  And you shouldn’t assume I want you to, either, lol.   But the show itself is a great show!  Just as the other is. 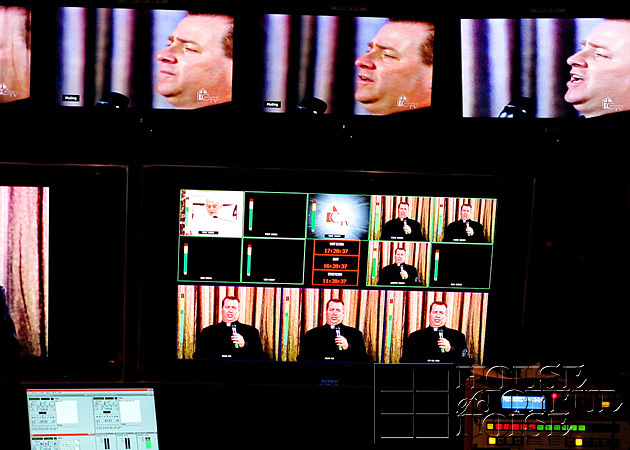 This a shot taken in the master control room.  Fr. Reed showed us the whole place….no stones left unturned. Well…would we know if there was?  Maybe not.  But, we saw a whole lot of the place, and it was incredibly interesting.  Also, we can’t really express enough, what really wonderful people, work for the CatholicTV station.  Seriously….so friendly.  A real sense of family there, at that network.  I almost longed to go to work there every day, myself. lol  (Behind the cameras, of course.)

After seeing so much of the station, what they do where, and how it all works, Fr. Reed let us into this conference room, which I think, he thought, he had planned for {A}’s birthday.  However, the joke was somewhat on him……as his CatholicTV family had this celebration planned for him, for his 25th Anniversary of Ordination.  You can’t see in the photo, but the room is full of people.  Clapping people. 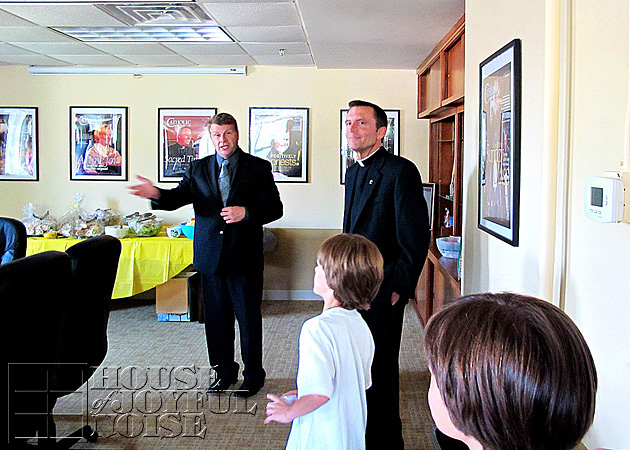 He. Was. Surprised.   I think he thought he had the whole day planned in detail, himself,….and this room full of people, for him, was not on his agenda.  (Notice the sweet blush.) He said something to the effect of, “Well weren’t we going to sing Happy Birthday to Alexis?”.  Jay explained they would, but they wanted to thank him for his many wonderful years of service as a priest, and the difference he has made in everyone’s lives….and he added how, “The Richard Family was in on this the whole time… .” 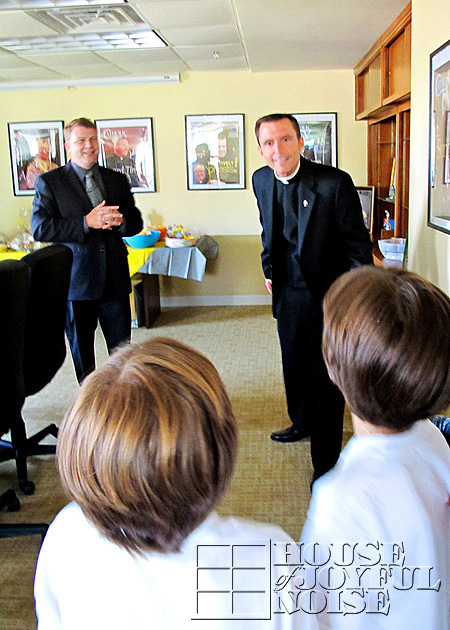 Ok…horrible shot here…..the camera actually went off by accident as I tried to hurry and GET this shot, where he was saying to our giggling trio, “WHY didn’t you TELL MEEEE???!!!”

So it seemed, he wanted to celebrate {A}’s birthday, and we were all there to celebrate his milestone anniversary.  See, after he had made tour plans with us,, we got a phone call from the staff, saying they were planning a surprise celebration for him, and could we keep him in “Studio A” for as long as possible.   Of course we were happy to!  We were SO HONORED, to have been there with him to celebrate.

It’s just kind of comical, because it seemed he thought he had some special surprises set up for {A} in this room, which none of us knew about at all!!  But there was actually a celebration planned for HIM in this room, that HE did not know about at all, but we did.  So….in the end, we were all surprised on some level. 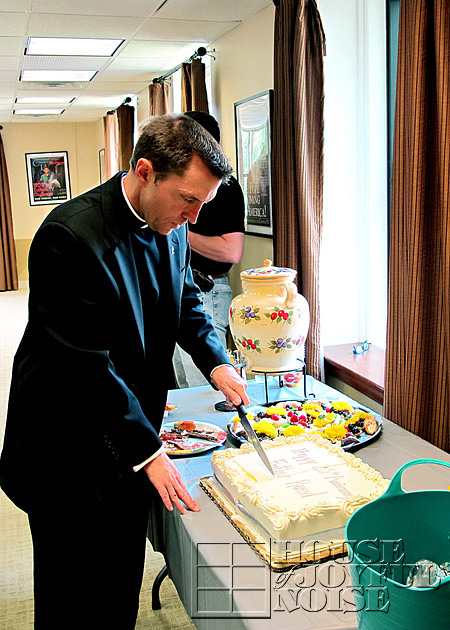 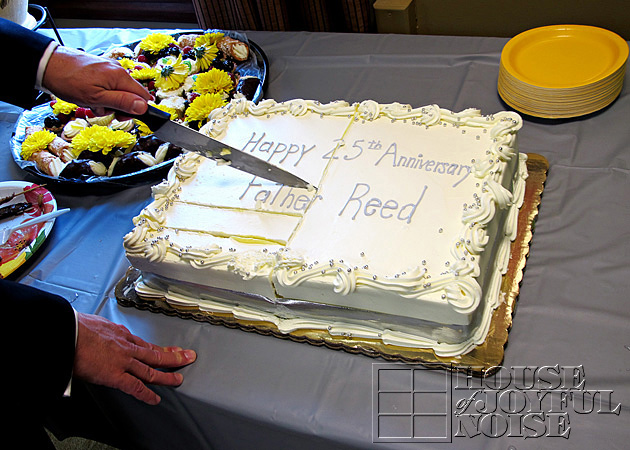 Soon enough, the focus turned on {A}, as the room full of people/staff (off camera)….sang her Happy Birthday, …. 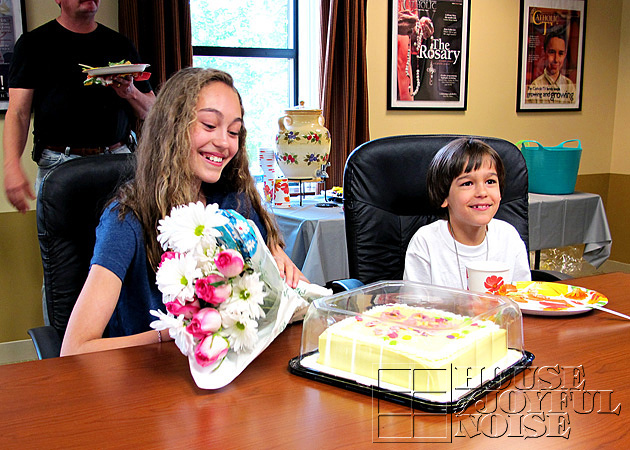 ….and presented her with these sweet surprises. 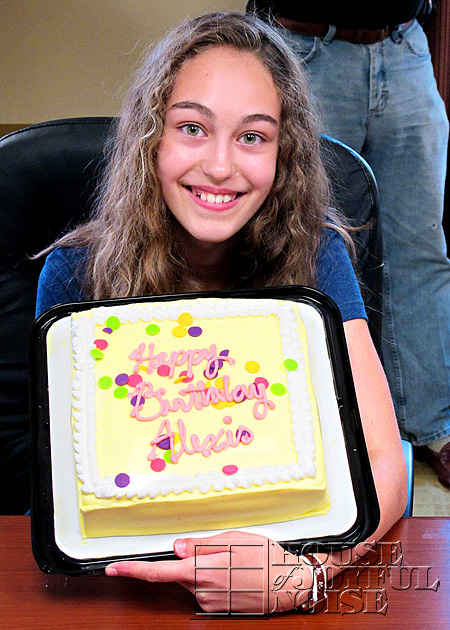 I was going to edit the red of her face out of this photo, but I think it is so cute.  She was as embarrassed as the dickens. I don’t recall ever, having seen her blush like this. So much attention. But still grinning from ear to ear. 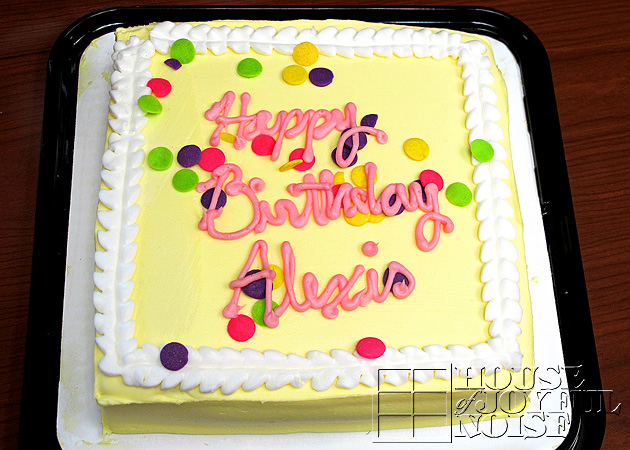 I really loved how the cake was decorated.  It seriously was so perfect for her personality. 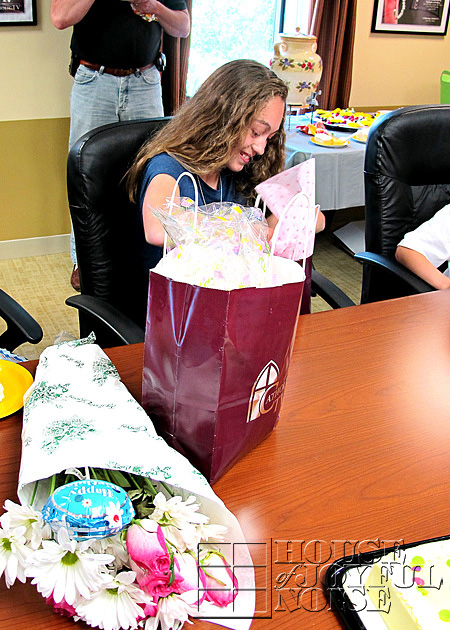 Cake…fresh flowers, and gifts……really.  She just asked for a tour, so she was SO surprised by it all. 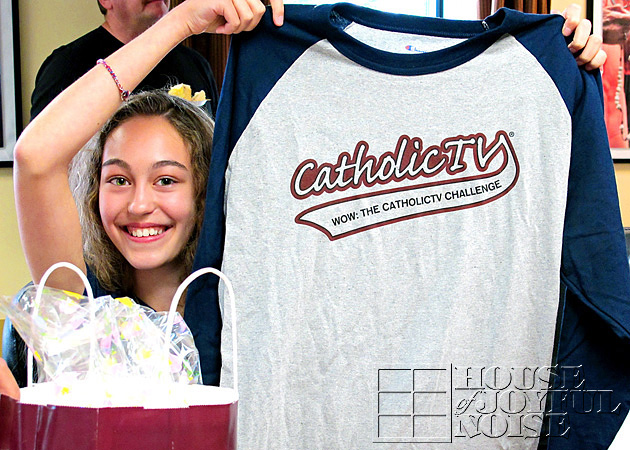 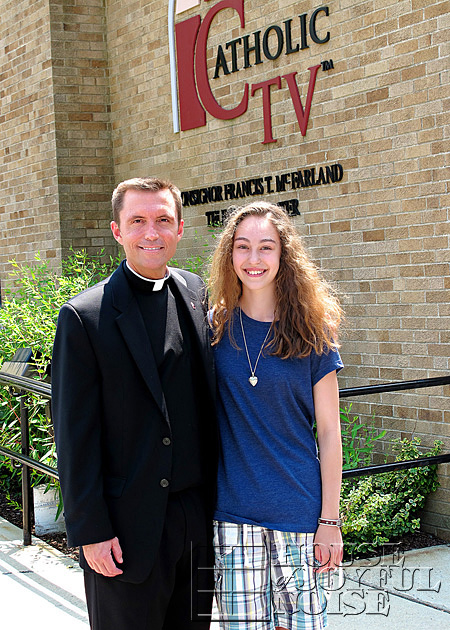 So here she is, just before we left, with her dear friend, Fr. Reed.  Who incidentally….truly did give her a birthday she will never forget.  To be there, for HIS special anniversary, meant more to her in the end, than anything.  She really thinks the world and a 1/2, of him.   He’s been a powerful and loving influence in her life, in many ways.

{A} made this bracelet for Fr. Reed.  It is the branding colors of CatholicTV.   She has made him these before in other colors, and he really wears them!  He wore a red, white and blue one she made him, for the longest time. 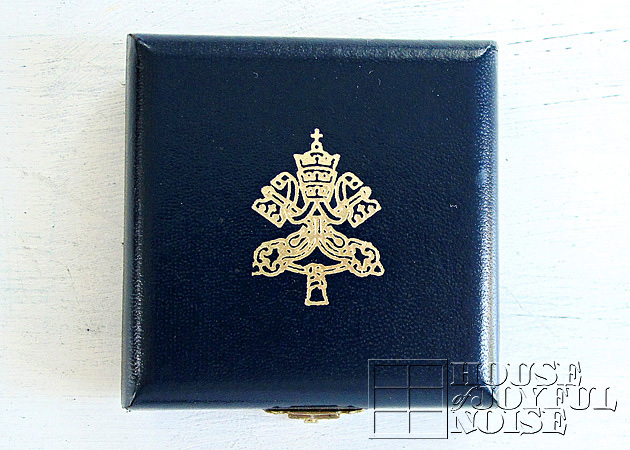 He had a very special personal gift for her too.

Ok first, on a side note, something I have seen on TV happened to me.  Someone said to me, (in this case, Fr. Reed), “Would you mind if I had a moment alone to talk to your daughter?”.  “Uummmm….Sure!   We’ll be at the car.” lol

Then he talked to her, and gave her this unbelievable treasure of a gift, which has been a personal treasure of his own…..

…a relic of Maria Goretti.

See,  St. Maria Goretti is a 12 year old martyr, who was attacked on July 5th, {A}’s birthday, and also Fr. Reed’s 25 Ordination Anniversary.  She died on the 6th, and this was her Feast Day. You can read all about St. Maria here, or watch the little video.

Wow, wow, wow.  {A} treasures this, so very much, and we know she always will.

(Here is a closer cropped shot.  I really love this photo of the 2 of them.)

Thank you Fr. Reed, and everyone at CatholicTV, for making our girl’s birthday so very special, and memorable.  We also thank you for how warm and welcoming you always are to our family, and all you do for the Catholic and Christian community.  You are a true light to us all, as we continue grow in our faith formation, be it in person, or the glow of our televisions all over the nation.

And one more HaPpY BiRtHdAy to you {A}.  You truly carry a light of your own, and we are blessed to have you as such a big part of our life, and our family.  We love you, more than you know.

Thanks to all of YOU, our faithful blog readers, for your patience in waiting for this last post!  I was SURE I would have it out before July was behind us anyway, but I missed that boat.  Nonetheless, we hope you all enjoyed sharing in our celebrations. {A} thanks you all for the thoughtful birthday wishes too!!