I promised I would share the 2 previous years of working with these 2 sweet little girls.  I decided I would work backwards from the most recent that I already shared, so this post is the photo shoot and card designed for 2008.  The theme I came up with was ‘Creatures Great and Small’, because we had a creatures great and small, and all beautiful, to work with!

The girls’ mom has a horse, and she has had him for many years, so I asked if we could do the Christmas photo shoot with him.  She LOVED that idea, because she really wanted photos of her horse with her girls anyway.   Incidentally, a couple of months after this photo shoot, our oldest daughter {A}, received horse riding lessons from us for Christmas at these stables, where my clients horse is boarded, and so happened to ride this very horse every time for her lessons.  {A} was really excited about that, because she was assisting me at this photo shoot, and so was familiar with this horse already.   His name is Wellington, and he is a BEAUTY!

Now, I didn’t really have a ‘theme’ going in my head yet, for the Christmas card itself, except that it would have photos of the girls and Wellington.  But, I had faith in myself that I would come up with something. Somehow, I would MAKE it work.  lol 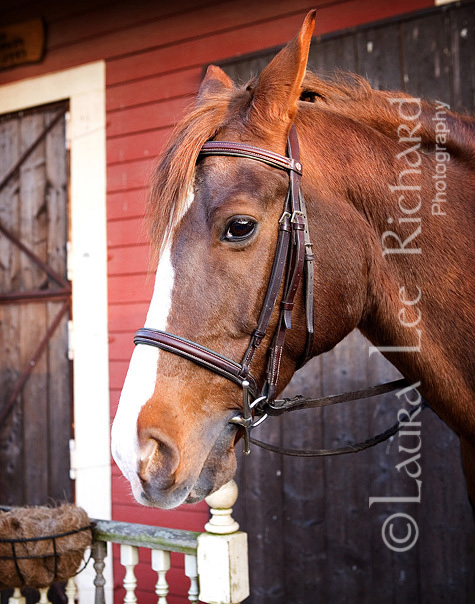 As usual for my work-style, I DID have visions in my head for the photos I wanted to take of the girls with the horse.  But when I got to the stables and talked to Wellington’s ‘trainer’, I realized I was going to have to come up with other ideas, real quick.  I wanted to take the horse and the girls out in the field, and put the girls on him, for one.  But, she said she would only allow the girls on him if he was IN the stall.  Bummer!!  Then she said the girls really should wear helmets.  LOL!!  Ok…I’m all for safety, but really.  That was going to kind of ruin my photos.  I talked her out of that little bit. So….needless to say, all of the shooting was done in this DARK stall, with ‘dappled sun’ coming in through the windows, which always bugs me in portraits in most cases. (Like this one! lol)
Talk about feeling creatively challenged at every turn. 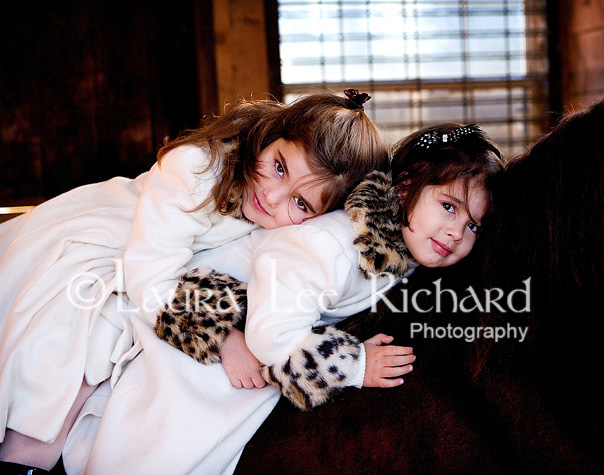 So here is one photo of a small handful of shots of the girls on Wellington’s bare back.   It was not an easy shot, because the little one wasn’t comfortable, saying her sister was ‘smooshing’ her. lol.  I was sure not to let the oldest one really put her weight on the little one, but….I wanted this shot, and I was going to get it! 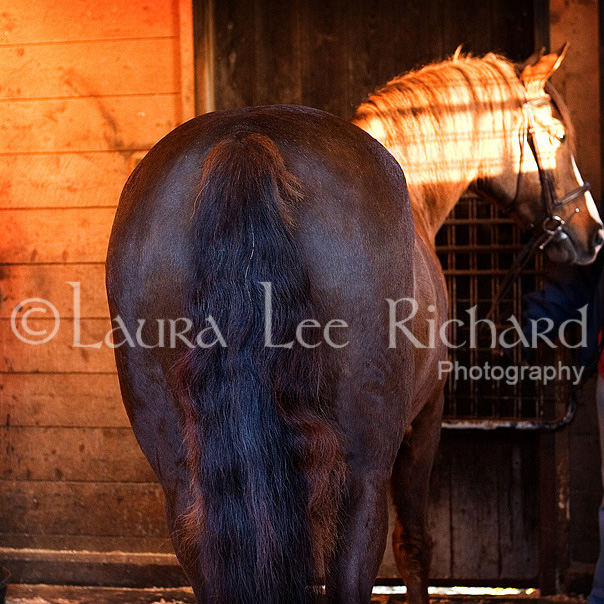 Oh!!  About the plan for clothing for this session.  I had suggested the mom find winter capes and boots, for the girls.  But she was unable to find any capes.  She found these beautiful coats with matching hats though, and I was thrilled with them as an alternative!! 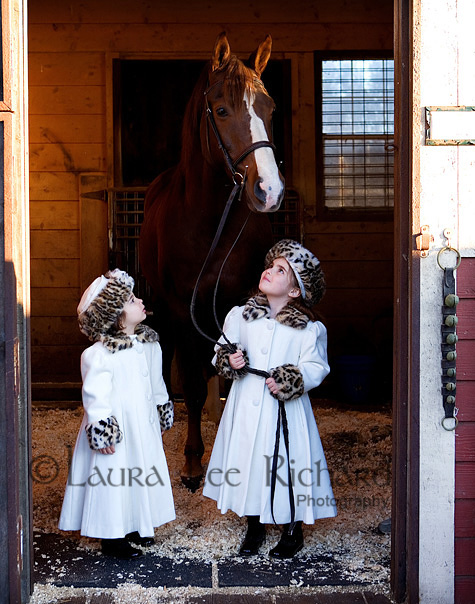 In the doorway of the stall.   Which is 1 of a several stall in a row.  These stalls are so cool.
You’ll see, it’s like a long house, with a farmer’s porch!  I just love it. 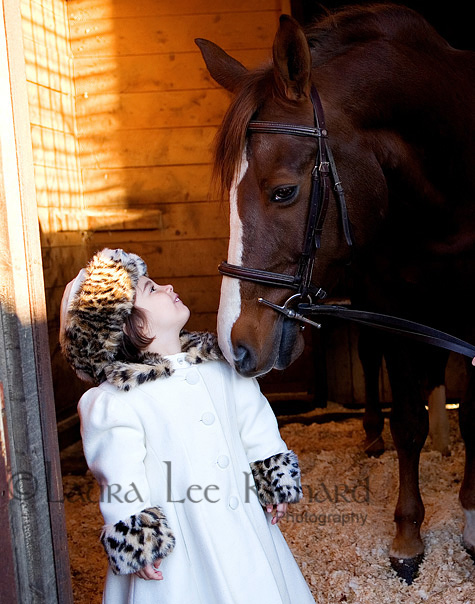 The little one, and Wellington, having a moment. 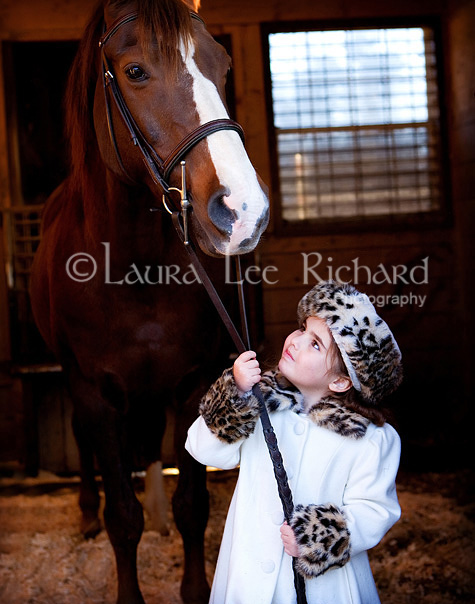 And the oldest with him too.  She has been around Wellington more, being the oldest. 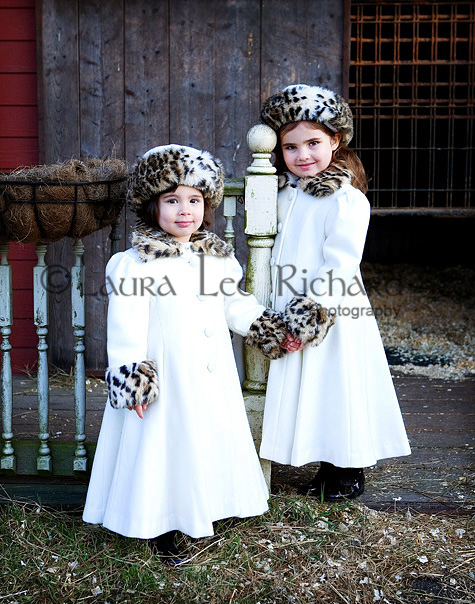 I really love this shot at the porch of the stall.  Don’t they just look beautiful and classy!?

And look at these 2 beautiful faces.  Such gorgeous brown eyes. 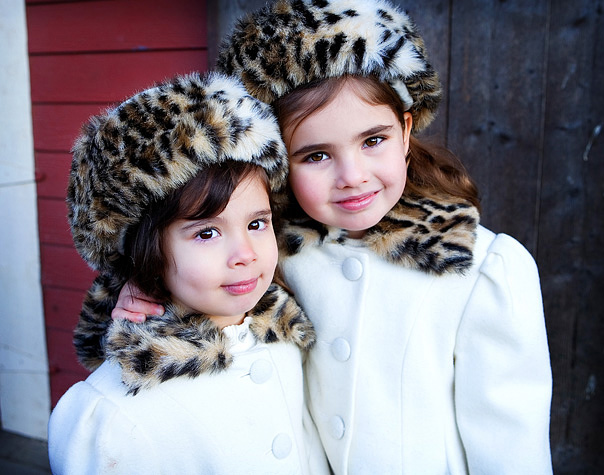 As I said, the mom chooses all of the photos to be used on the card, and then orders those in prints along with lots of others from the photo shoots.  This shot above isn’t the close-up shot of them together that she used for the card, but I chose it for this post because I just love the little ones expression, again.   She cracks me up. 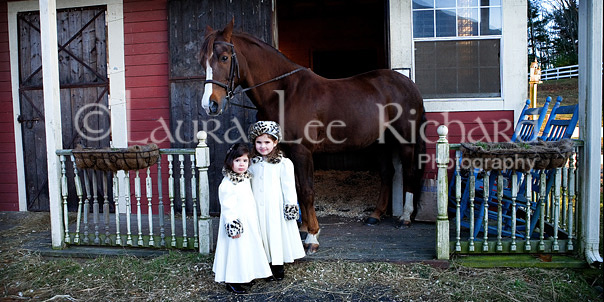 Here is a better look at the style of the outdoor stalls. I just love the old feel to it all, with the porch with worn spindles, and gorgeous old wood split-doors!  Look at the rocking chairs off to the side.   But back to the girls, you’ll notice that the little one doesn’t have her hat on anymore.  Wellington kept nipping at it, and he pulled it off.!  lol.  She threw a little fit.   So….Wellington got another peppermint candy to keep his mouth busy, and the little one got one, too.  Both of the girls were doing a really good job, and I knew the photos were going to be great.  As I said before, it just takes a little more time and patience with little ones sometimes.

Besides what you’ve seen here, there were other photos I took and the mom bought too, including some of the boarding owner’s Clydesdale horse, Baron.  My client bought photos of him too, to give as a gift to the owner.

I was so excited to get the photos edited, and show them to the mom–who was over the moon again!  Once she chose which ones she wanted me to work with, I got to work on the card – and here is how it came out. She LOVED that also.  And so did I!   I blurred out the names, per usual.

These cards were 5×7, and were printed on a beautiful linen stock.   And I did think of appropriate text for the card – which for me, is the fun of the creative process.
**Again – Please ignore the necessary watermark, for the web. Naturally they were not part of the card or images. 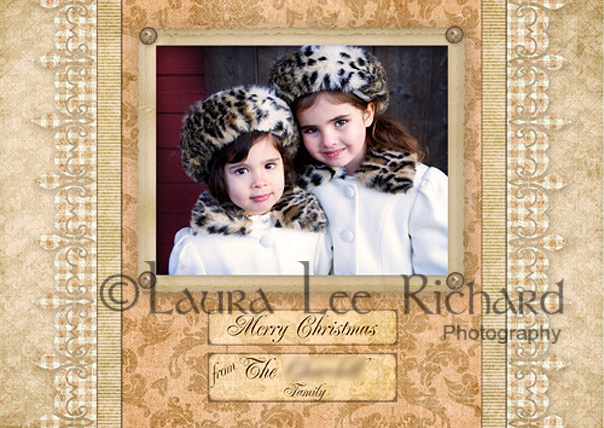 FRONT of the card. 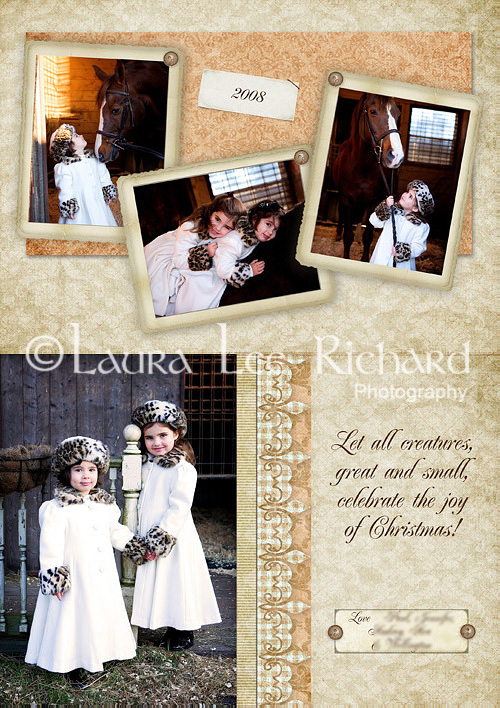 They opened up vertically, so this is the INSIDE SPREAD. 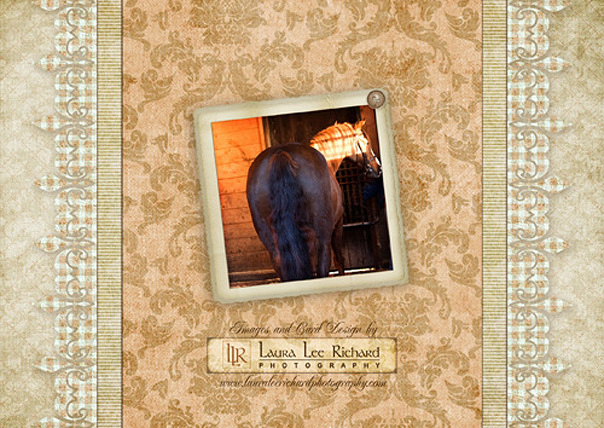 The BACK of the card…..which I thought was a riot.

Again, I love that this client let’s me have so much fun on the back of cards.  She lets me do whatever I want with everything, and naturally, I can really get along with someone like that!

The next session I show with this family, will be the very first time we worked together, 2007.

Hope you are enjoying this series. : )