Finally, we are ready to reveal to you the chicken coop that has been in the works for 2 months!
We know many of you have been waiting to see it, and we have to tell you, we’re pretty darn excited to show it to you!

PLEASE NOTE: There are many photos in this post, so please give them time to load.  Then at the end there is a link to even more photos that I thought some would like to see, such as early stages of the coop being built (for those who may have missed it on Facebook), the inside of the coop, and and a closer look at some of it’s other cool features.

So, as lots of people know, I have wanted to get some chickens for so very long!  Michael has always said I could, but the time was just not right for a long time, while we got the inside of our home finished, our property set up as we wanted it, and ready, etc.
It’s been a long time coming, but we’ve been living the little dream now, of having chickens, since we got 1 day old chicks about a week into July of this year.  Chicken-keeping has been as fun and exciting as we ever thought it would be! 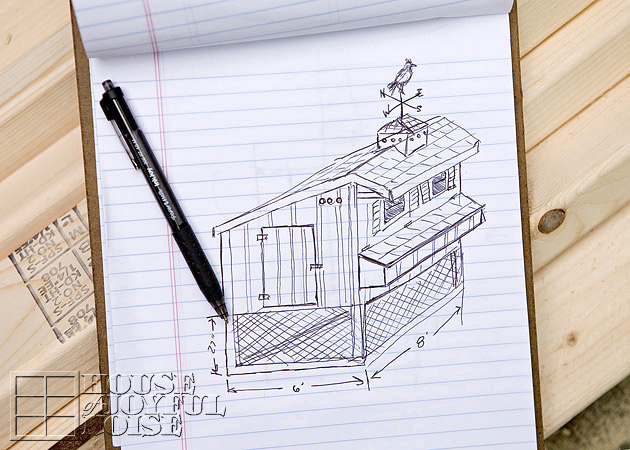 All I ever wanted or dreamed of for my someday-chickens, was a small and very simple coop. But, Michael really goes all out when he gets brain-storming. He’s very creative, ingenious, and handy in craftmanship, and well, he got sketching, as always. The detailed features also grew as he built it, and it has been pretty amazing and exciting to see it all come to life, built from the ground up, from what stared as little possible plans on paper. 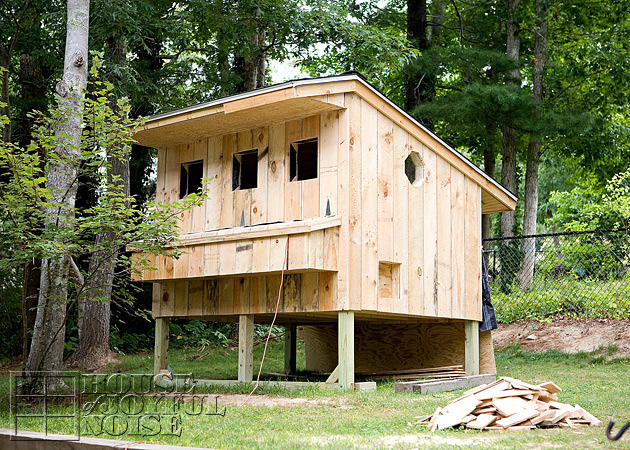 Many of you who follow us on Facebook  were able to see some progress photos of the coop that we shared, as we began to build.
The photo above was as far as we took you before we decided that anymore might ruin the surprise of the final reveal.
Especially when we were getting ready to stain it with color!  We figured many would be most curious about what color we’d choose.
(I mean, that’s an important and fun decision that needs to be made, I think.)
I considered many colors, but there was really one that was always just how I imagined my someday-chick-coop in my head, and while I looked at other colors, I just never could let go of that original image in my head go.
We hope you love it as we do, but it’s really o.k. if you don’t.  (We still will.).