{A} usually posts on her own about her chipmunks.  But I’m doing it for her this time, and I think you’ll understand why by the end. 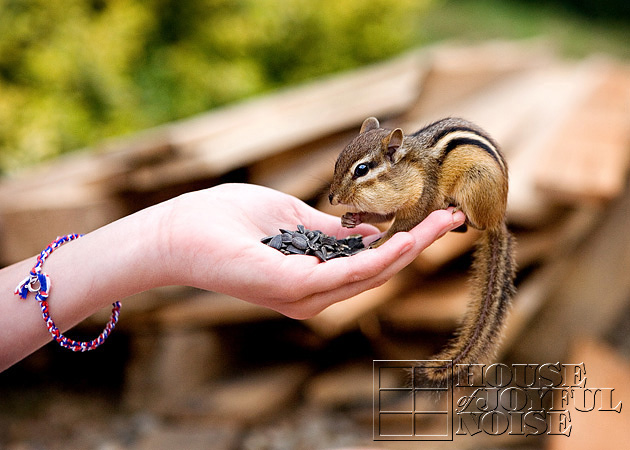 For any of our new blog visitors, you may not be aware that {A} has been hand-taming chipmunks since she was about 9 years old.  She’s blogged about it several times and I’ve taken lots of photos along the way.  If you (or your kids!) are interested in all of those older chipmunk posts, we’ve conveniently created a page of those archived posts,  all together, in one place. You’ll find the link to the archives in the right hand side-bar. Just click on it and a whole page of lots more photos and posts (written by {A}) pops up.  The posts are from most recent at the top,  to the oldest posts as you scroll down.

You may wonder why this post, and the {A}’s chipmunk archives, are in the homeschooling section.  Well, I’ll tell you. One of the reasons we wanted to home school our kids, is because we wanted them to have enough time on their hands, to discover their passions.  To want to develop interests enough, that they seek to learn, on their own.  To relish in the joys of childhood, and immerse themselves in them.  To wonder, discover and experience.

It’s a beautiful thing, as a parent, to be able to witness that with our children, as much as we do.  No more have we seen these things unfold in the most fascinating way, than with {A} and her chipmunks.  Her patience, belief and determination have been impressive, to say the least.  She has LEARNED SO MUCH, from spending time with her chipmunks, and from researching a lot, to find out what she wants to know about them.  Her love for her chipmunks is so real.

One of the chipmunks she’s been closest to was a girl chipmunk she had named Chipmouse. (To make a long story short about the name, I was the first to spot that chipmunk out the window on the banks, when she was a baby, and I thought it was a mouse.)

Chipmouse is the chipmunk that {A} was photographed with in the last couple of posts. Well, this past spring {A} noticed that Chipmouse kept running and disappearing into the drive-way, so she investigated, and that’s when she discovered this new chipmunk hole: 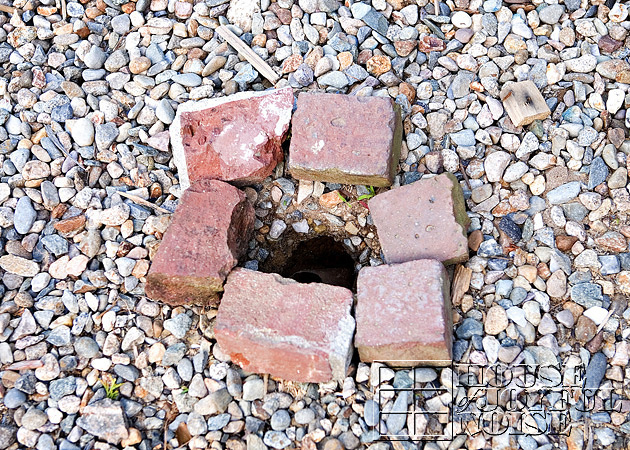 We put the bricks around it so that no one would drive over it.

Soon, {A} noticed Chipmouse had nipples.  Turns out, Chipmouse had babies down in that new hole.  So {A} was watching for a good month before one day, she started yelling and running into the house all excited because the babies came out. There were 3 of them.

A few days later, we started having a problem with the outdoor cat from the neighbor across the street, stalking the chipmunks.  : (   We were doing all we could to protect the chipmunks, and keep an eye out for the cat.  But we aren’t up at sunrise and there are time we’re not home!   So Michael talked to our neighbor guy across the street, who talked to his girlfriend who’s cat it was.  He reported that she said we had permission to ‘shoo the cat away’ or squirt her with water or whatever, but there was nothing she could do, because ‘it was an outdoor cat’.  We didn’t like that answer.  We give these people all of our pine wood for their campfires, and we were just asking them to keep their cat off of our property.  If we wanted a cat in our yard….we’d have a cat of our own. It was unfair. So Michael and {A} were spending a lot of time trying to guard the chipmunks.  But that cat had a hiding spot, and we knew where it was, there in the plentiful brush. It was always ready to pounce, the second a chipmunk popped out.

It wasn’t long before the first incident came to be.  Michael was standing in our living room, looking out the window, when he saw the cat running from our drive-way across the street with something in it’s mouth.  Of course…the rest of us had no idea what was happening, when Michael made some inaudible noise and went FLYING out of the house and RUNNING as fast as he could across the street, right into the neighbor’s yard across the street, and out behind their house.  The kids and I knew whatever just happened, it wasn’t good.  It seemed like forever before we saw him coming back, but I had NEVER seen a look on his face like the one he had. He was rippin’ mad.   The cat had gotten one of the babies….which it dropped when it saw Michael coming, and the baby chipmunk ran terrified into the nearby woods.  We all knew it wouldn’t dare ever come out again, even if it knew it’s way. It was just a baby.

From then on, Michael and {A} were losing sleep trying to protect the rest from that cat……but soon, Chipmouse…..{A}’s longtime friend, and mother of the babies, was missing.  And then another baby, gone too. Shortly thereafter, Michael got into a chit-chat with the lady over across the street and her young daughter (in her 20’s), as they were heading out for a walk,  and the daughter admitted she had found a dead chipmunk at their doorstep on the deck.   Michael was SO upset, and {A} was crushed.

She developed a very close bond with the only chipmunk she had  left. She had named her CB, which stood for ‘Chipmouse’s Baby‘. lol  CB created some new holes just a few yards from the side of our driveway, on the edge of our (kind/considerate) next door neighbor’s gardens and waterfall. 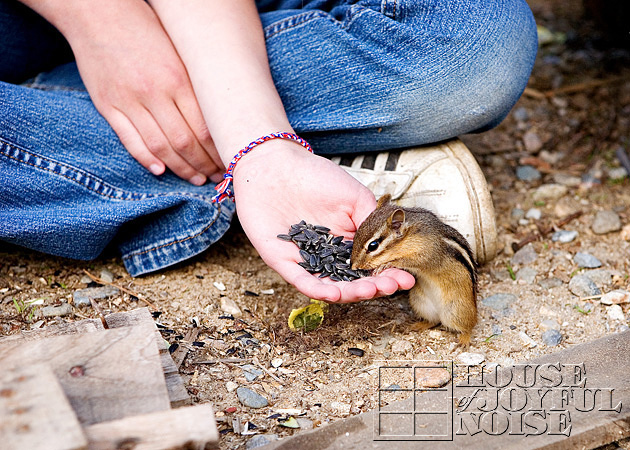 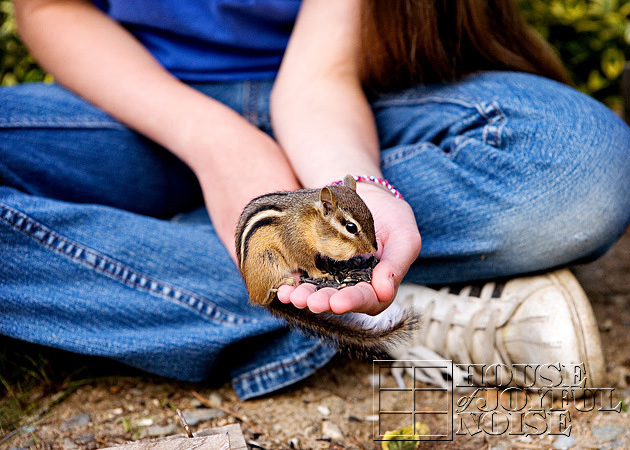 They spent lots of time together.  {A} could be out there with CB for hours, just playing with her, feeding her, and making sure she was ok.  Just trying to protect the life of her only chipmunk left.  But again…..we couldn’t be there 24/7.   That cat was ALWAYS watching, waiting, for any opportunity.

That’s what led to building the chipmunk house.  It not only kept the squirrels from eating the seed {A} put out for her chipmunk, but it was a safe place for CB to load her cheeks with feed—which takes a couple minutes you know!!  The poor thing was in a nervous panic, because of the cat around.   So…..the chipmunk house was planned out, shopped for, and built pretty quickly.  It worked great!  We loved to watch her go in, run up her little ramp to the second floor, and fill her cheeks.  You could really see that she felt comfortable and safe in there. 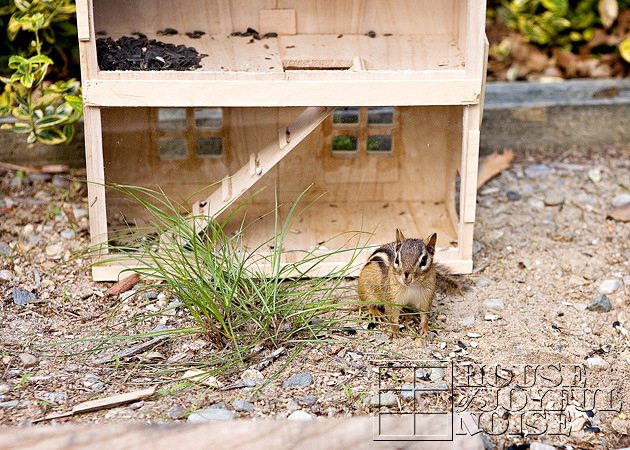 Here is CB, posing in front of her new home.  lol. 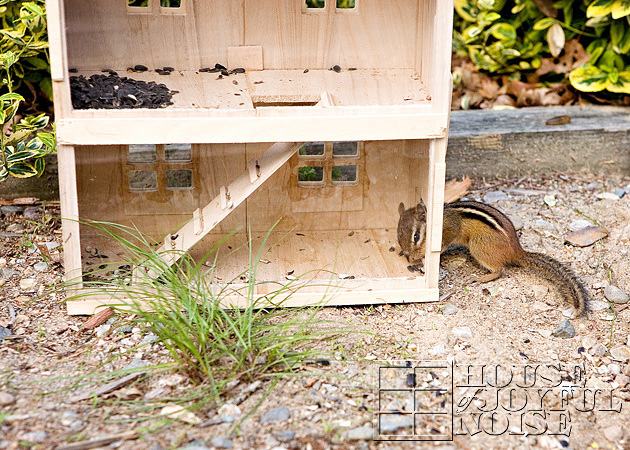 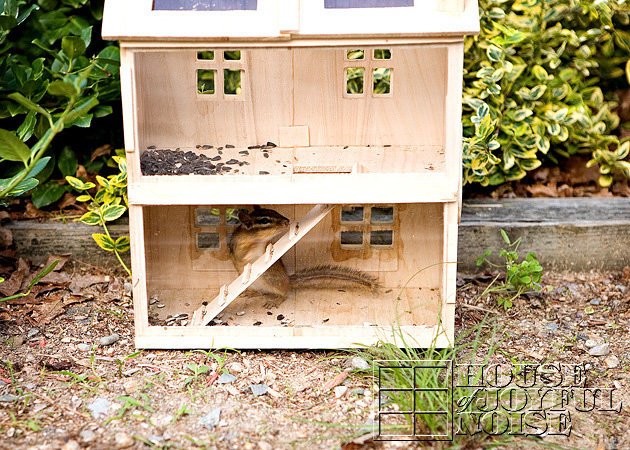 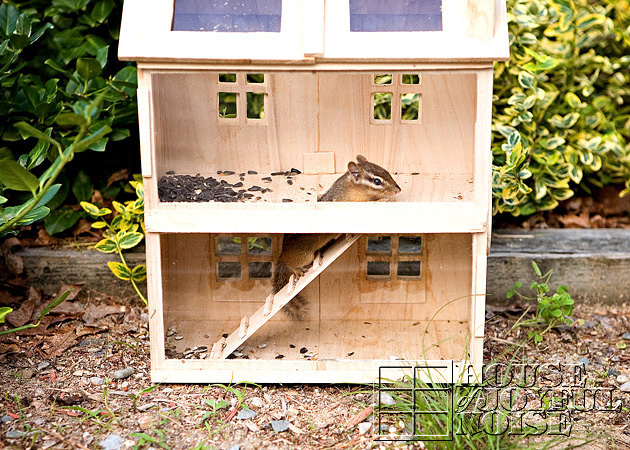 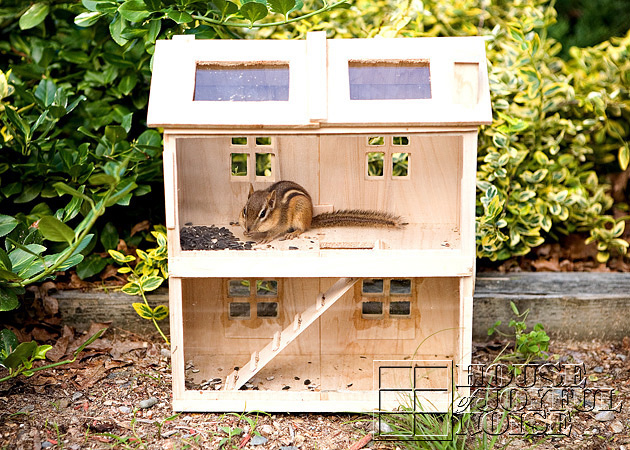 Then she would cautiously come back out, and run to her hole to store her seeds.  Then come back and get some more. 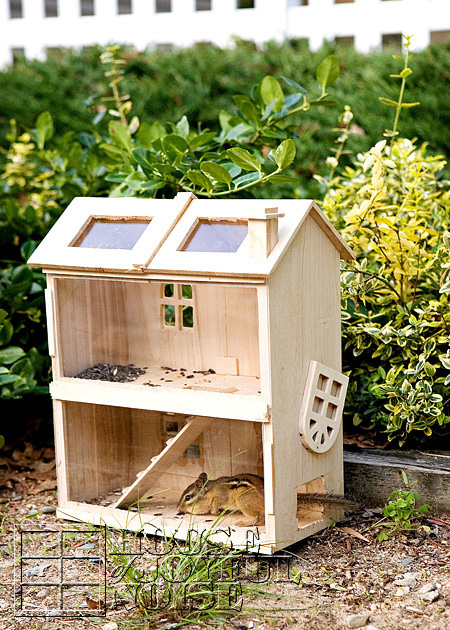 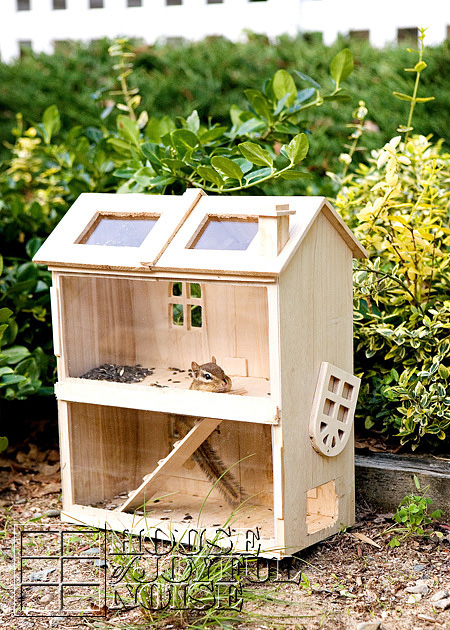 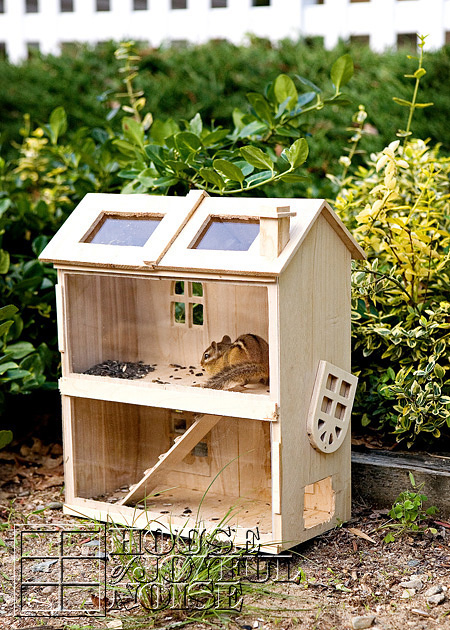 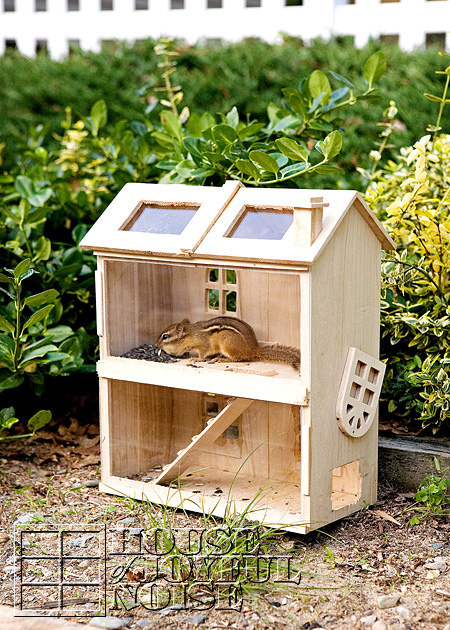 {A} Spent a good part of her birthday, with CB.  We could have all done anything she wanted, because it was her special day. But after mass and a couple of pet stores she wanted to go to, spending time with CB was what she wanted to do.

She much of the same for several days, until one day just before mid-July.  CB wasn’t coming when {A} called her, and we haven’t seen her since.  Or any other chipmunks, for that matter. 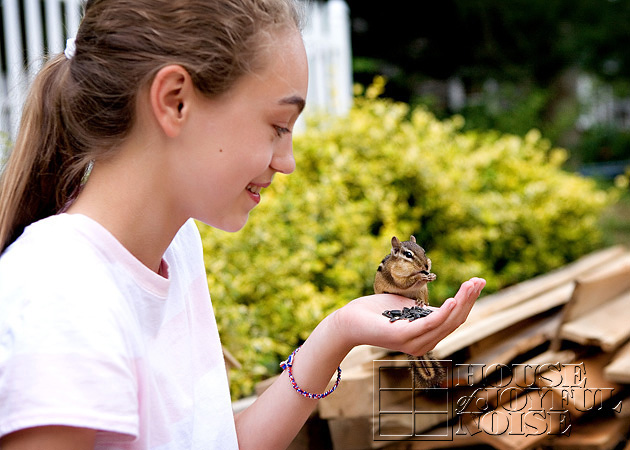 (This is {A} on her birthday with CB)

We know the inevitable happened.  The cat got the last of her chipmunks.  We have all been really upset about it, but {A}’s heart has been broken.  She’s had a few days where she just wanted to be alone in her room, and we knew why.  Loss like that
is hard for a kid her age.  Hard for anyone, to lose someone they care about so much.   When we got up in the morning, we could look out the window and see {A}’s chipmunks sitting on the stump or the waterfall next door, just watching the house….waiting for her to come out and see them.   That neighbor, by the way, has 3 indoor cats.  They understand and agree that it is not right to let the cats go after the wildlife at our bird feeders, and they have watched {A} grow up training the chipmunks between our yards, too.

Is it FAIR, to have to tolerate having a cat on a killing-spree, in your yard all of the time, because someone else decides they want their ‘domestic’ cat, to be ‘an outdoor cat’?   They kill just for for the sake of doing so.  They go after wild birds, chipmunks, etc., and just bat these creatures around, until they die.  And then they just leave it!  Or bring it to their master’s doorstep.  Hunt and fun over. Senseless.  We believe, if anyone is going to have a ‘domestic’ cat, they should get fixed, and keep it in their own house. Or at least in their own yard!  We should not have to accept a hunting cat on our property on any given day, because some cat owner wants to let their cat outdoors. It’s not fair. It’s not responsible. And it’s not considerate of anyone else, who never wanted a cat!   When ONE home has an outdoor cat, the WHOLE NEIGHBORHOOD has an outdoor cat, whether they like it or not!  It’s not fair.

The harshness over the end of this post (so unlike me…you all know it…) is because we are so upset.  We loved these chipmunks.  Our daughter invested many hours of her life training these sweet little creatures, who loved her, as much as she loved them.  She invested her heart in training them, and developed real relationships with them.  It’s just sad that she ended up losing them all, because they become a play toy, for someone else’s pet. 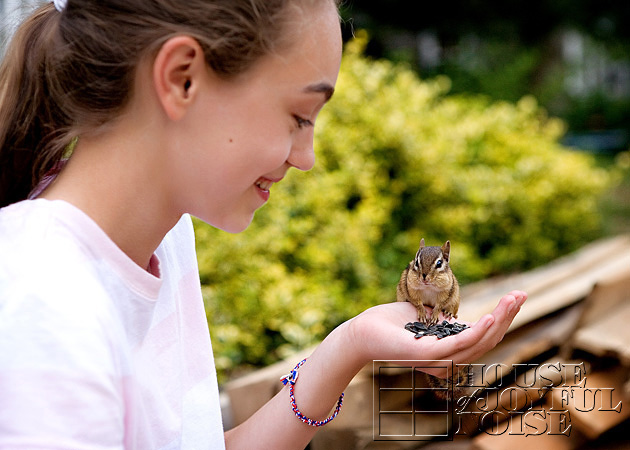 If you haven’t read them, I think you would all enjoy the photos and posts in {A}’s Chipmunk Archives to the right there.  There are no rants there, I promise. They are all written by {A}, and there are some great photos to go with them.  We hope you enjoy them sometime!