As a home schooling mom, I often find myself speaking to others with inquiring minds regarding the home schooling choice, that daily opportunities to teach and to learn, are everywhere you turn throughout every day.  Home schooling is truly a lifestyle.  It’s not an activity or a part of any given day, but for most home schoolers, it is literally woven intricately throughout every aspect of their life.  It certainly is for us.  Being and living in that frame of mind, the opportunities to teach, and for our children (and often us as well) to learn are all the more evident in the course of our days at home, or out and about.

So knowing there was probably a lot we could learn at the fair, when we went as a family,  was expected. What we weren’t expecting, was for there to be such an organized and fun program put together by the fair, for the kids to learn.  It was a pleasant surprise, to say the least!! Nothing like this has ever been at the annual fair we usually attend.  Check this out:

Upon admission, each kid was given a pamphlet, like the one above.  As we walked around enjoying the fair, they were to keep their eyes open for various spots all over the fair, for a sign like this one:

Their pamphlet had a question in it for each station participating, that they had to find the answer to at that specific station, by listening or watching the demo instructor there, reading the information around the exhibit, etc.  When they were ready, they went up to the head of the station, and the one in charge would ask them the question.  If they gave the correct answer, they got a stamp on their pamphlet for that station.  When all of the stations in their pamphlet had a stamp, (and there were LOTS of them), they went to a specific area to get a ribbon.

I thought it was the greatest thing, for all fair-going kids!  SUCH a learning experience.  It was much like an educational treasure hunt, and the treasures were bits of knowledge. ; )   My kids just love this stuff, so they were on a mission the whole time.    This post only shares some of the stations.

See the sign to the right?  The Birds of Prey was a Kid’s Station.  The question they needed to find the answer to was:

“Why are birds of prey also called raptors?”

There were several birds of prey on display here.   I thought this owl was so beautiful, and fascinating.

His wing span was beautiful and impressive too.

But right after I took this shot, he shot a sharp and forceful stream of urine, that actually startled me.  There was some definite wow factor to the action.  I think I stood there wide-eyed with my jaw hanging, for a second.   They may be wise, but I didn’t see a whole lot of dignity with this one.   Goodness.

I loved watching the kids be questioned, and answer with such confidence.

The answer to the question was:  Because they catch their food with their feet.

This was in the Agricultural Building.

They didn’t really have to write the answers down, but they wanted to.  They just had to answer the question verbally, correctly.

Maybe because they had new pens that the guys from the Air Force station gave them.

We came to this cow milking stand, where kids could learn how to milk the cow.  It wasn’t a Kid’s Station, but they just wanted to try it.    So I assessed the situation, and learned something myself that I pretty much already new….

You just can’t trust any cowboy you meet.

And I sure did not trust this one.

I saw him help a little girl down from the steps, and I got a little chill.  So before my kids went up, I said to him quite clearly, “My kids can get up and down all by themselves, thanks.” With a little wink for good measure.  I think he caught my drift.  He went back to his shifty-eye-mode quick though.  He let each kid milk the cow for like…a mili-second, and he was like, “Alright clean your hands. ”   Which was fine with me really, because I couldn’t move on soon enough.

At this bird wood carving station, the kids had to identify 3 birds in the display case. They all manged that fine, as we do a lot of bird watching and identifying.

{A} was not doing the Kid Station pamphlet, as she was a little old for it all.  But she went in and named them all to the guy, because she couldn’t help herself.  Her bird-loving grandmother would have been proud.

This was my favorite Kid Station:

{A} was not excited to go take a closer look around here.  You could say she had a bad experience with bees when she was little.  Very unnecessarily, due to another kid’s foolish action, who should have known better.  She got stung all over of course.  I can hardly talk about it without my blood boiling all over again.  I thank God she didn’t turn out allergic to bees, because up to that point that day, we didn’t know!

Anyway….I try to encourage her to face her fears little by little, as she can.  It’s not healthy to let them control you. (I apply the same philosophy to myself, by the way.) So she came in and looked around with us.   She just got the willies.  ; )

I loved this display.  What a science fair project, huh?

Check this out:   This honey comb box had a air vent tube to the outside, and all of these bees were local, and drawn to this honey comb.  They went out, collected pollen and came back to the honey comb.

The question was:   How many queen bees are in a hive?

They marked the queen bee here, with a dab of paint, so that exhibit visitors could spot it.

Do you see it?

The satisfaction of getting that stamp, at every station, never wore off.

We watched how glass blowing is done too.  This was one of my favorite shots from the fair.

Well that concludes our “Come Stroll the Fair Series.”   We hope you enjoyed it, as much as we did!  Did you?

Were you able to attend a fair this summer?  What is your favorite part of the fair?  Is it the fair food?  The crafts?  The rides?  The exhibits or performances?  Tell us.  We’d love to know what brings you to the fair.

The other afternoon, Little {O} and I were working around the gardens, pulling weeds and pinching off dried bits of flower parts, when we noticed we weren’t alone.  There was a bumble bee, working right along beside us.  It was amazing watching him work, seemingly oblivious to our presence.   So graceful, as he floated around.  It was but  moment, before I couldn’t take it anymore. I asked {O} to keep an eye on him, while I ran into get my camera.

He was all over the place, as was my exposure, as he went from light flower to dark, and back again….I could hardly keep up with my settings, and I didn’t have a macro lens either.  So…technically far from the best shots they could have been, but it sure was fun taking them! 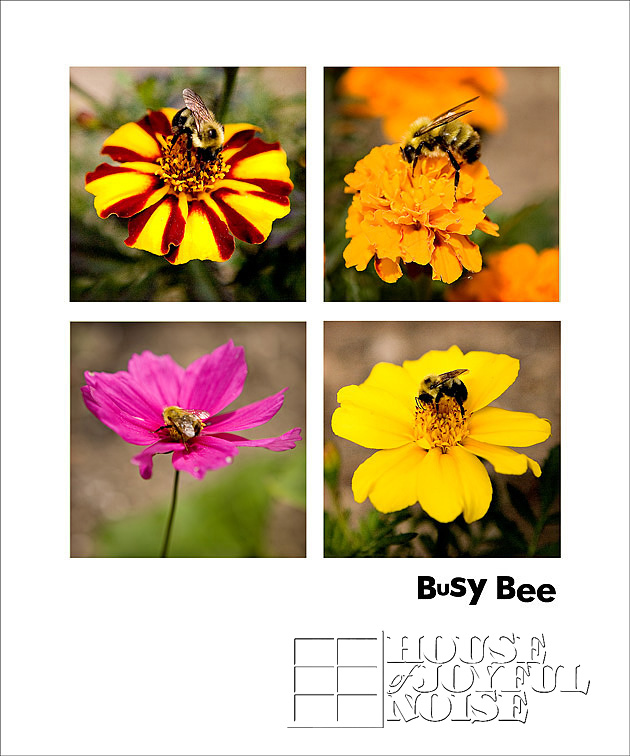 These are the moments, when I’m just so fascinated with the brilliant details of God’s beautiful work.
We thought we’d just share the moment with you, and we hope you enjoyed it, too.