Yes, our triplets’ turned 9! So hard to believe. 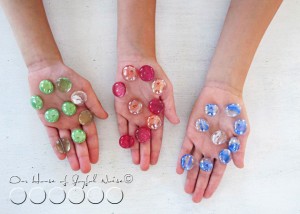 This birthday post is a bit late just about every year.  But considering the triplet’s birthday is the last day of August, and then we hit a new busy school year, a belated post is like a tradition with valid excuse, in my mind. I don’t think anyone is really waiting for it anyway.   It’s not a report as much as a record of our celebrations for ourselves, and anyone interested.I hope to scrapbook it all someday too.

Sp here are tons of photos from over the course of a couple of days, and a little story-telling here and there too, if you’d like to hear all about it.

We go to the fair every year, but this year we made it part of their birthday celebrating.  The first thing we did when we got there was go see the arts crafts in the Agricultural Hall. It’s more of a judged show, of quilts, kid’s artwork, etc. And then we got Fried Dough!  We could hardly wait for that. So we didn’t.  ; )  (Well, Alexis waited to get hers right before we left later that night.) 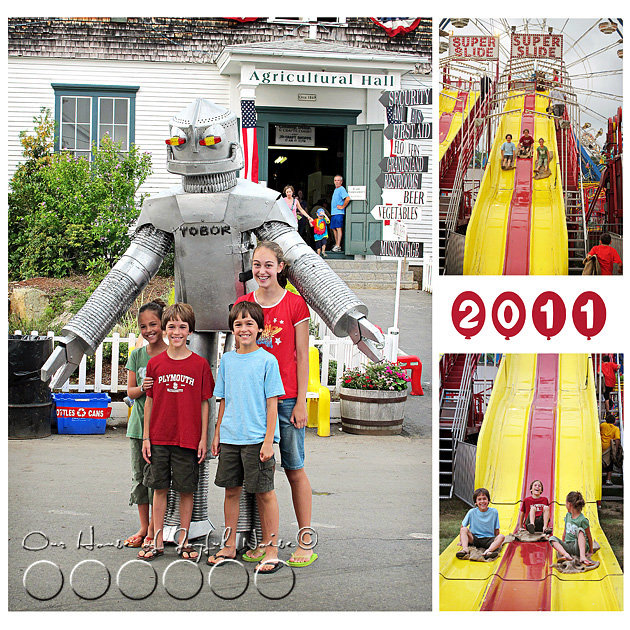 Tobar the Robot is always around, and it’s hilarious to see him scare the dickens out of fair-goers, when he suddenly moves.  We sat and watched that for awhile, and laughed out loud with food in our mouths. (That would be the Friend Dough.)  The Trio always love going down Super-Slides, every chance they get. I think I’d feel the burn, climbing those stairs over and over. 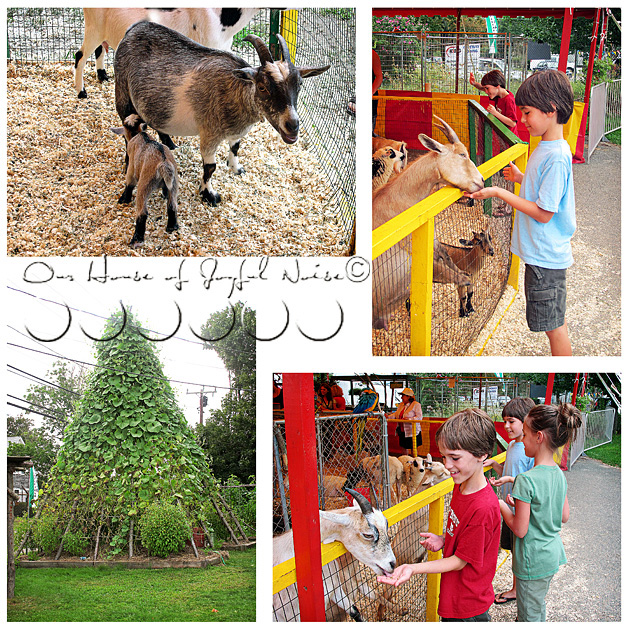 Feeding the animals is always a must with them too.  I thought the little nursing goat was the sweetest little thing. I have no idea what plant that tee-pee is, but I have a feeling puts off big blooms at some point? Any guesses or knowledge? You can go inside too. There’ a sitting bench in there. 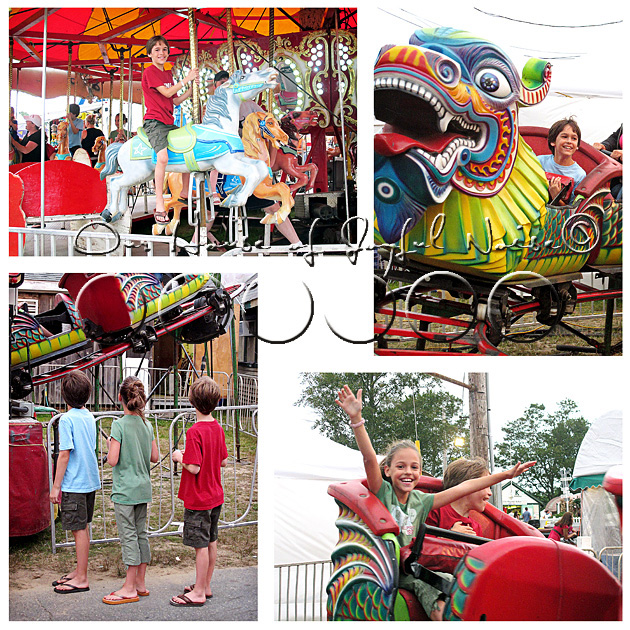 They still love the Carousel, and always ask to find that. Then they go several times on some of the smaller rides. 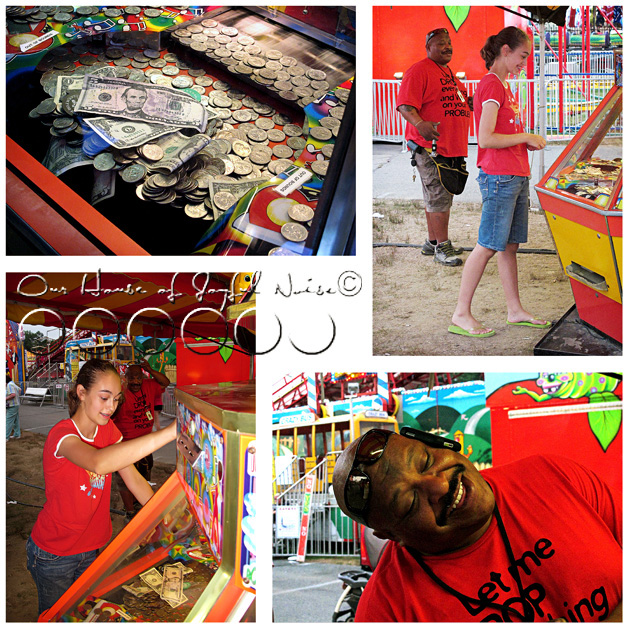 The guy running this game was a HOOT! But anyway….Oh my word…..do not let this girl near Foxwoods Casinos! lol.  {A} saw this game, where you can win cash, and it was all she played! She was darn near-tormented by the thing, and was having a hard time walking away. She was playing the window in the top left there, so you can see how much money was right on the ledge there! She was smart with her money, only putting back in what quarters she won, but she was going for those bills, and this guy knew how to joke with you and keep you playing.  He was funny! Look at how he was talking on his cell phone, so he didn’t have to hold it. Anyway, I would have discouraged {A}, as it did feel a bit like gambling, except that I knew she’d do well by any money she won.  Probably something charitable, and then put the rest towards her campaigning funds, or something. ; )

Like most fairs, there was food everywhere!  Oh the aromas in the air!  So many choices one doesn’t get very often, that Michael and I found it hard to decide what we wanted, come dinner time.  But our kids knew just what they wanted, and I could not even believe it!  SALAD! I was like….“Really?  At the fair, you want salad for dinner?” Yes, really, they did.  Alrighty then. We finally found the place they had seen earlier.  HUGE salads, and the scoffed every bit up.  I was so torn over what to have myself, that I ended up just having a a few bites of their salads. It WAS very good. I think it’ll be on my mind next year. lol 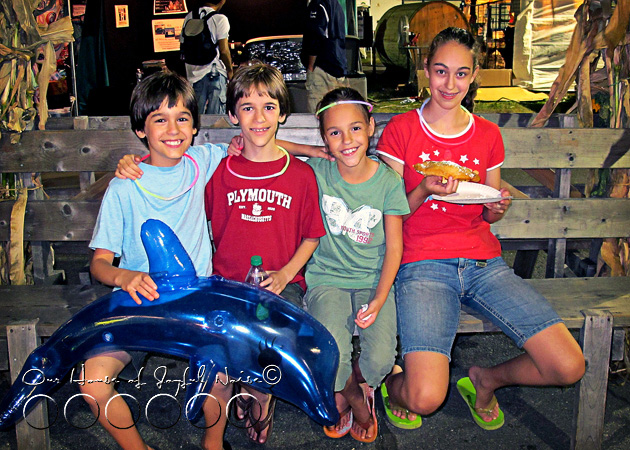 They had a really great time, and it was dark before we finally left. 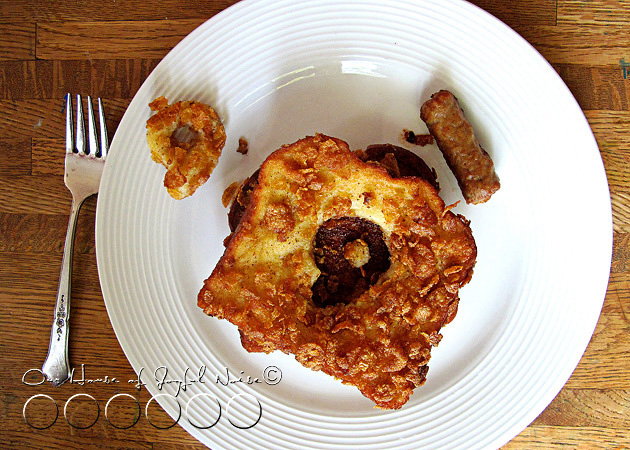 This is their special birthday breakfast, that I made, and already shared in the Vittles section.  A little twist on our traditional birthday number pancakes. and the whole fam loved it! Fried French Toast, made as healthily as I could manage. (This shot is pre- butter, confectionery sugar and syrup, of course.) 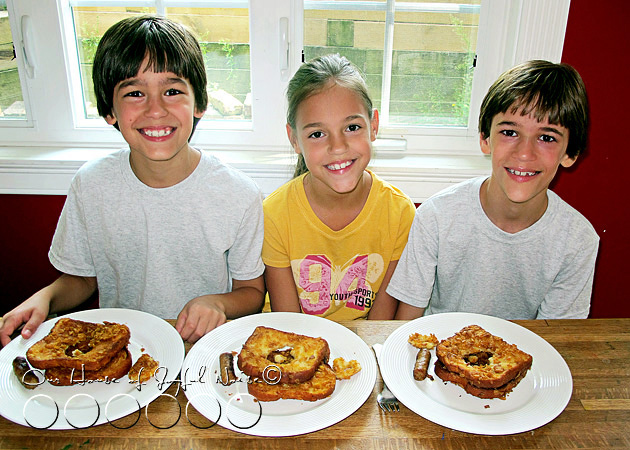 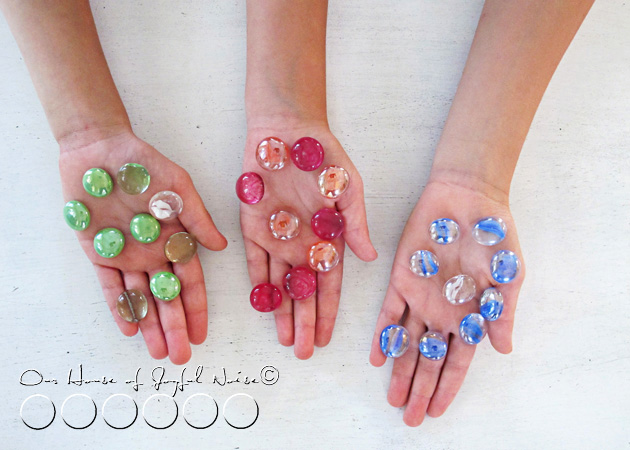 We gave each of them 9 surprise gems for their Gem Jars on their birthday morning.  They were thrilled about that! 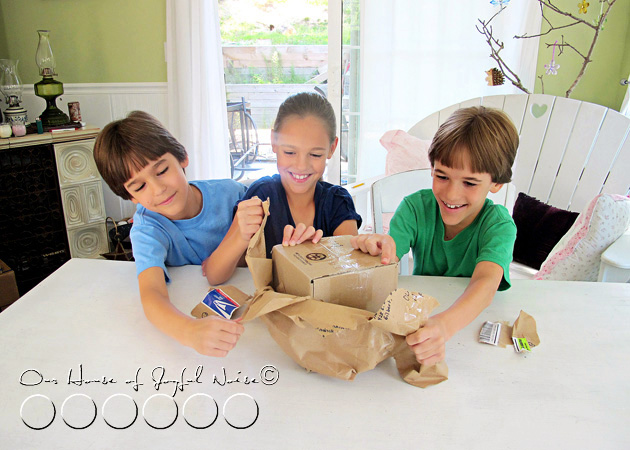 Packages always start arriving the week leading to their birthday, and this one from their Aunt in Arizona, sat on the floor in the sun room in front of the wood stove, waiting….and it intrigued them to no end.  They went over to it every day, wondering if maybe there was a Scorpion in there!  And guess what?  There kind of was! lol.  They each got a bunch of Arizona souvenirs and such, and one of the things was a scorpion encased in acrylic, like a paper-weight.  They loved it all. They get just as much of a kick, out of their birthday cards. Arizona stuff from their Aunt.  The scorpion is in the red thing. 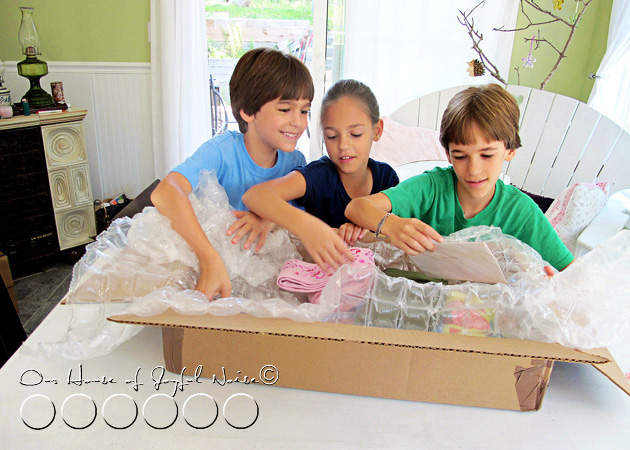 Also a big package from Grandma. 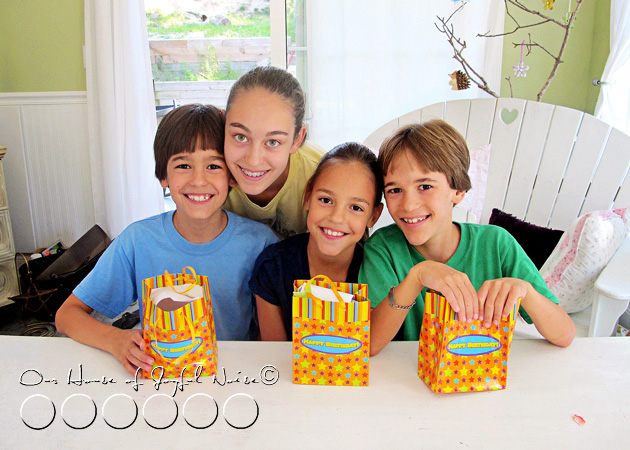 Big sister had a gift for each of them, and they also all had one for each other.

All of the photos are not in this blog post.  That would have been ridiculous. But suffice it to say they were very grateful for everyone’s thoughtfulness.  They treasure everything they get, always.

Of course, we had a gift for them too….. 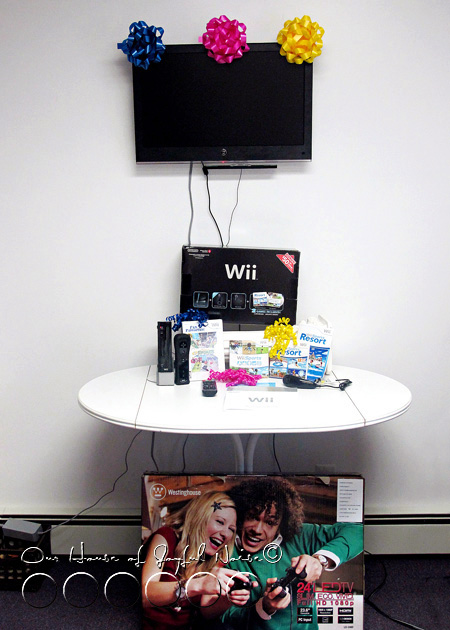 I think they were shocked!  I am not a fan at all, of video-games for my kids, personally. This may explain why they are likely the last ones on earth, to get Wii!  And believe it or not, it was my idea.  They are older now though, and it comes with serious rules and strict time limits, which they are all totally fine with.  It’s not an every day thing, but more once a week.  They have never even asked for Wii, or anything like it, even after they played some a time or two at others home, and had a good time.  It’s just not the kind of thing we ever do much.   But, with the rules and limits we have in place, it’ll be a fun thing when it’s still raining after a week, or the bitter-temp days that come all in a row, come winters, to get some energy out – because it is pretty physical.  They only got the sports related games. Believe you me…..this is not connected to the internet (hell to the no…), and there are certain games/sports that are off limits. 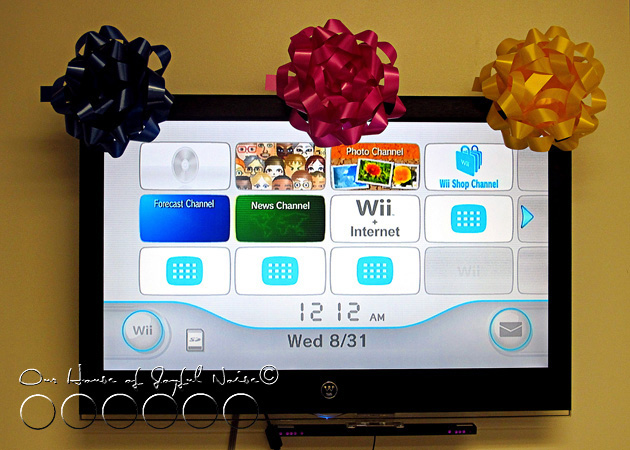 Normally we don’t invest in such high-ticket items–especially for birthdays or holidays. But, Alexis did get that camera for her 13th.  And this gift is split 3 ways. Of course the whole family can use it.

Also, Grandma generously pitched in and helped pay for it. <3 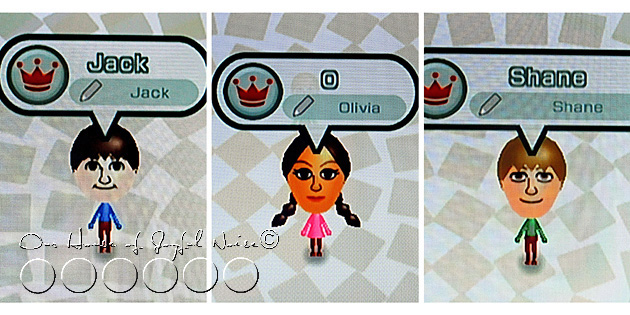 Creating their Mii’s alone, had them laughing hysterically trying the different features. I think they came out really quite resembling them!! 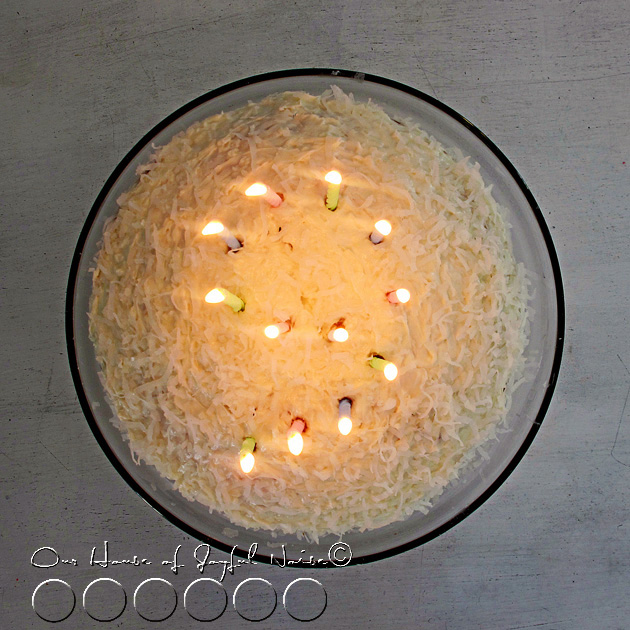 It was a unanimous decision, and they wanted one cake:  White cake with chocolate chips, white frosting and coconut flakes.     We were thankful not to be up baking 3 different requests all night. We’ve done that when they have 3 different requests, without complaint. We feel they deserve the kind of cake they each want, like any birthday kid, and shouldn’t have to compromise. But sometimes we luck out.  Buying store bought cake is not an option, with {S}’s peanut allergy. Home made is always better anyway. 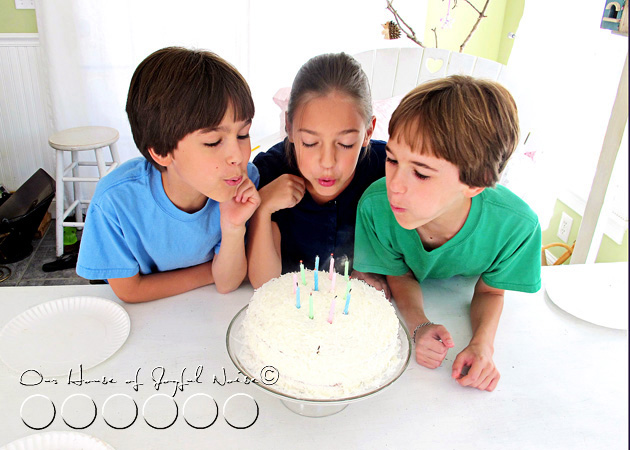 (May all of your wishes come true.)

Here’s a really fun thing we also did:  On the night of their birthday, some family friends of ours were gathering down on the waterfont, for Plymouth Idol, because…..their son was competing!  We were invited, and we wanted to be there to cheer him on.  (You all know I can make some noise! As can our kids. lol) 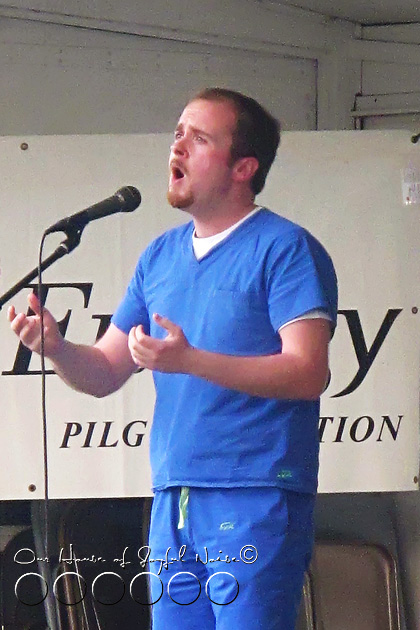 His name is Mark.  I think 100’s auditioned prior to the event, and he made it into the top 10, which was the public Plymouth Idol we went to watch.

Don’t mind his scrubs, but he barely got to the competition in time!  He’s a nurse, and came from work.  The judge panel was kind enough to wait for him, and he got there just in time to go on stage 10th!

Mark has an amazing voice!!  Not only is his singing beautiful, but it is filled with such emotion.   He’s the kind of performer that when you watch and listen, you get so sucked in, you forget where you are.

Here’s how the competition went: There were 10 contestants who sang, the judging panel cut it down to 5, those 5 sang a song, they cut it down to 3, and then those 3 sang again.  The judges commentated after each performance, just like American Idol.  Mark had a little tough competition.  There was a young opera singer who was certainly gifted. But Mark was the best, and non of us felt were biased. lol.  He had 3 songs picked to sing, should he make it through each round:  1 from Les Miserables, and 2 by Josh Grobin. 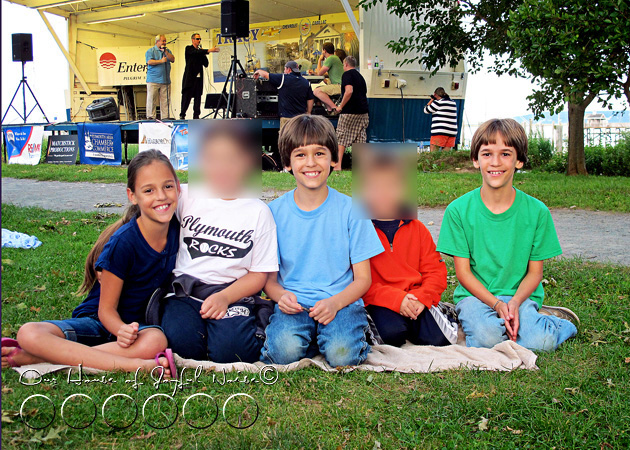 The Trio had a really good time, because their little friends were there too.  I did not seek permission to share their photos on the internet, so I just blurred their identity. But they were so cute all together, having a ball. They were upfront and cheered Mark on like crazy. Despite how it appears in this photo, there was a big crowd there for this event.  It was a beautiful night too, right on the waterfront, with the ocean breeze.  We were really happy for Mark and his family.  What a great evening.

To end our day of celebrating, we went out to dinner to somewhere the kids have always wanted to go:

The food was great, as was the company. I have another story from there that was pretty amusing, but it could get lengthy, and this post is probably long enough. (You think? ; )  You can ask me for it separately if you’d like. But anyway, the servers were really good to the kids. What I really love about their birthday every year, is how they really celebrate having each other. They’ve said many times, in different ways in various conversations, that they are so happy they were born together, and get to celebrate their birthdays together.  I’ve asked them, “Don’t you think it would be nice to have a birthday all of your own, too?”, and they said “No!”.  lol.  They’ve never known anything different, so they probably cannot imagine it.

One thing is for sure; While we did feel like we hit the Baby Jackpot (once we got through all of the fears and worries), we are so thankful, that they came along, regardless.  Whether together, or one at a time, each one of them is a blessing all their own to us, and it’s a beautiful life, to watch them grow up(Alexis Grace. too!), and become who God uniquely made them to be. I do wish it would slow down a bit.

Dear God, thank you, for entrusting them to us.

And to JackMichael, Olivia Faith and Shane Jacob: