This is Part II of our HALLOWTIDE: All Hallow’s Eve, of our (Catholic) family celebration!
You can see Part I HERE, if you missed it! You can expect to see lots more fun, and our creative Halloween-themed menu items!
–
Part II of our partying continues:  While the cookies were baking, the kids started boogie-ing to the Halloween music that had been playing in the background all night. They were just a riot to watch, and I just had to take photos of that too. LOTS.  Here are only 4.  I have to tell you, every time I see these shots, that just crack-me-up, I hear ‘The Monster Mash’ in my head.  Funny, because that was not the song playing at the time. Go figure.

And then they wanted to take photos of US, as {A} had done in a past Halloween.  Of course, they wanted to each take their own shots.  So I set up my camera on a tripod.  Since they hadn’t YET had much sugar, I took a deep breathe, and let them use my camera equipment. (I told you it was a crazy night!).  They all took turns, and did a pretty good job!  It would have gone faster if Daddy had stopped tickling me and making me laugh. 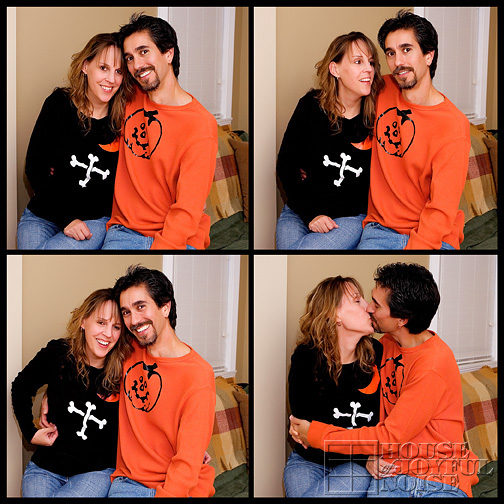 Then the triplets/little ones started playing a Halloween Bingo game we have, while {A} was getting the cookies out of the oven and taking them off the pan to cool.  They were SO cute playing this game, helping each other win! 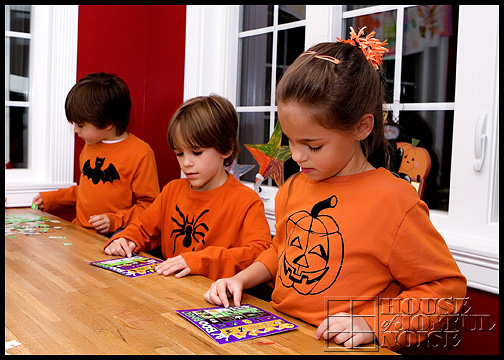 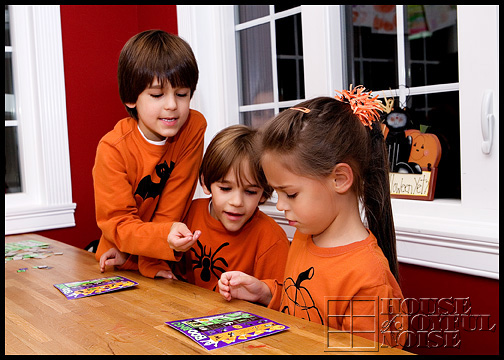 Kid-Daddy had mentioned running next door to the property he manages, and next thing we know he was freaking us all out. (None of us knew yet, that he was lurking in the windows right behind us in the photo above…do you see him?)  The ‘school room’ is surrounded by windows, and we never knew where he was going to pop up – knocking on the windows.  The kids were screaming their heads off, never knowing where he was going to show up.  Then he was at the door, and by then we were all just laughing at him. 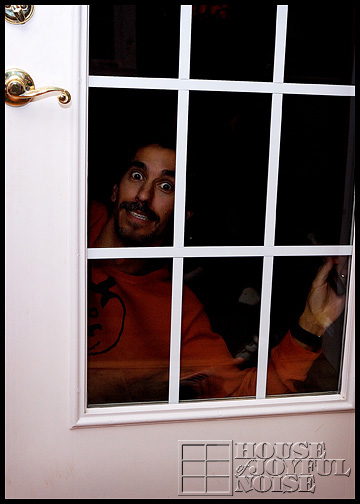 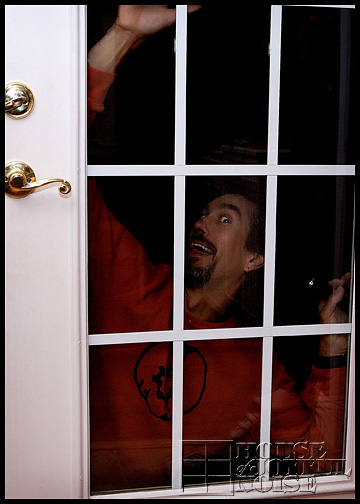 Once we got our heart rates down, (yes, we’re easy, huh?  lol) the kids got to making another mess decorating cookies. We have done a much better job, but by this time, Mama was beat – so anything goes! They had fun going overboard with the ‘stuff’ on top, and eating them. Although they seemed to be winding down. 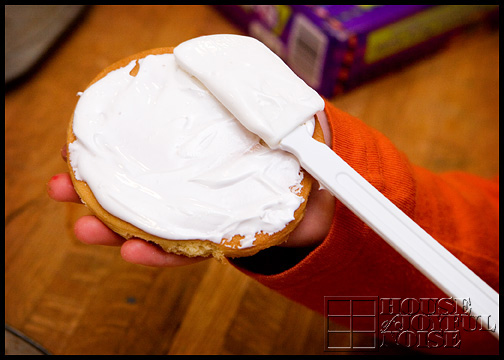 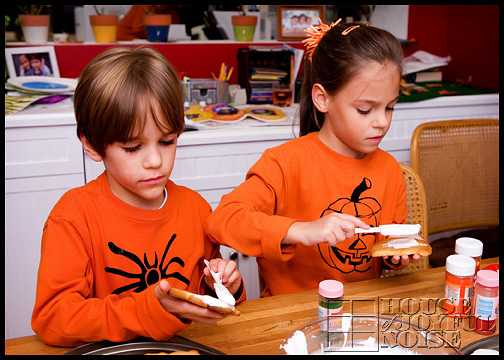 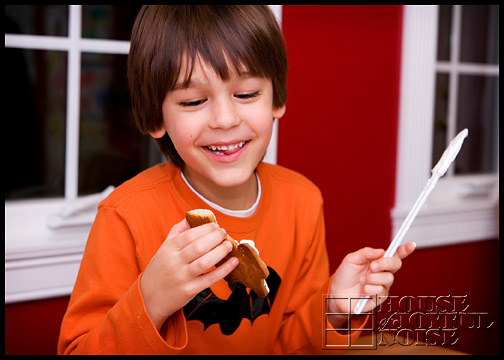 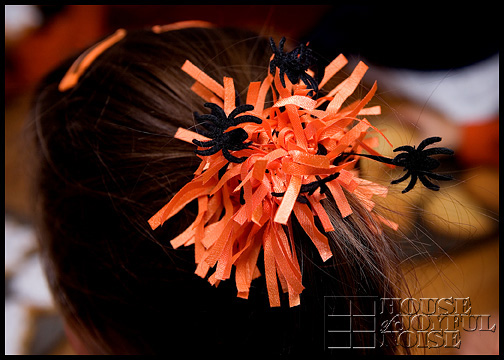 ‘Who Baby!  Look at the stuff on top of these cookies!  Good golly! 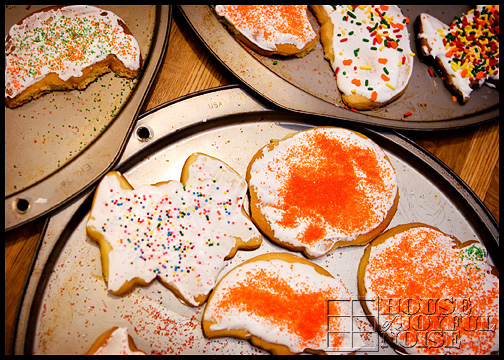 So they had one that night, and another the next day. But really…I was not about to let them eat the 2 dozen until they were gone. So we put one out for the squirrels.  Just to see what would happen. But surely, it would be too much sugar for them as well.  Now…I WISH I had photos but….NO!  Apparently, one squirrel thought they were DELISH!  If only I could bring myself to take a shot through a glass window.  But no, I scared him away trying to open the window. If only you could have seen him…..sitting there eating this cookie like a furry little person! Really fast, holding that HUGE cookie between his paws, and taking one bite after another and chewing really fast.  As if…well, he was afraid his mother was going to catch him!  Anyway….we’re still having fun putting out one cookie at a time. Entertainment at it’s best, you know.

I knew it was getting about bedtime, when my silly little boy came over to me at the computer where I was checking my e-mail….laughing SO hysterically, he could hardly walk to get to me.  I turn to him, to give him the attention he was demanding, and this is what I see . . . . 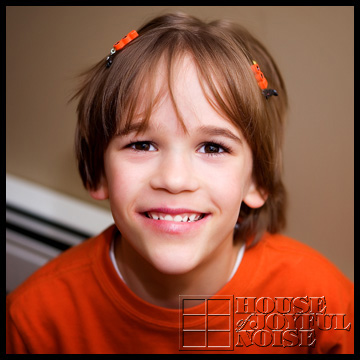 He put some BOO Halloween barrettes in his hair.  He was laughing so hard, he collapsed n the floor, and then just did a big sigh.  Yup—bedtime. Right after a shot of him of course.

Even our 11 year-old was ready for bed.  She already was holding tight to her ghost, Gus.  Gus is the ghost her Meme’ (her maternal grandmother, now passed) gave her when she was 3 years old.  {A} has slept with Gus on every Halloween night, ever since.  (Which could totally make me cry this time of night.) 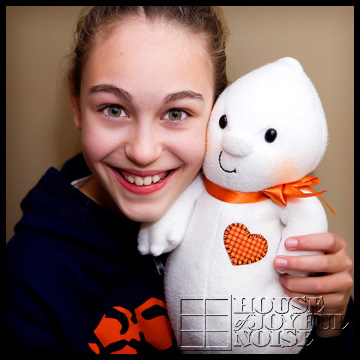 That wraps up Part II of this running theme post. It was such a fun night together.  We hope you enjoyed ‘partying’ with us.  Stay tuned for Part III next – All Souls’ Day.