We’ve been doing more crafting than usual around here lately, as Christmas gifts.  I’m way behind in blogging about them, but in thinking about that I realized in a different light….they are Christmas gifts!!  Surprise gifts, of course. Granted, the recipients,,,our extended family….rarely visit our blog. If ever.  But, you know, they MIGHT.  And we really don’t want to ruin their Christmas surprises.  So…..I guess I just won’t post the finished products, until maybe after Christmas, and if anyone concerned visits and guesses what we made, oh well!!

“Well, why don’t we just bring up the sewing machine and figure out how to use it?”

After a moment of stunned silence and a confused stare, I think I ended up on the floor, laughing hysterically.  Outright bafflement hysterics.  WHY you ask??  Because TRUST ME, my mother never sewed a day in her life! In fact, she had one of those trigger gun things that shot plastic things to put a button back on.  And anyone reading this, who knew my mother, is probably laughing at just imagining my mother sitting at a sewing machine.  I loved my mother, God rest her soul.  But she was NEVER the sewing type! She was just not the real domestic kind.  In fact, neither am I, by genetic-nature, that is – believe it or not. My early years as a wife, was on the comical side. I loved this man, but really….did I really have to do all those things they do? I wanted to want to. But…where WAS the WANT to??  Only for him. You know? Love is a crazy thing. I had to grow THAT bone, and I DID! In time.  Granted, it’s still growing.  But I have found deep and abiding joy in things I never knew I could embrace.  In fact, I feel myself really…going back in time, if you will.  My husband has really noticed how I have evolved over the years.  In fact,  he actually called me “my little pioneer woman’” the other day.  And I think I gushed, “Real-lly?” Truth be told, I was beaming with pride. Because I am admiring their ways more and more every year.  Thus…hand making some gifts, I suppose.

So he goes downstairs, and low and behold, he comes up with a SINGER, and dusts it off.  Well I’ll be darned.  There it is.  I tried to remember seeing it before. In a closet maybe?  In my childhood basement? Hmmm.  Just not sure.   Anyway….he got to figuring the thing out, because he’s mechanical like that. And he was suddenly seeming to be MORE than enjoying it.  Can I just say?…..

Men and their toys!! 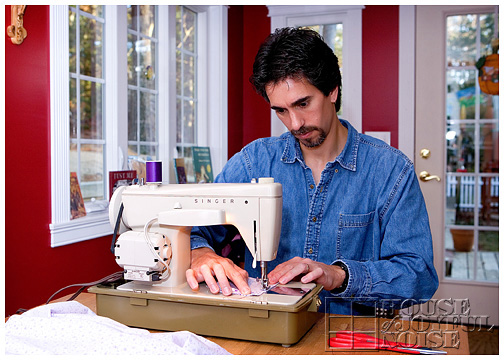 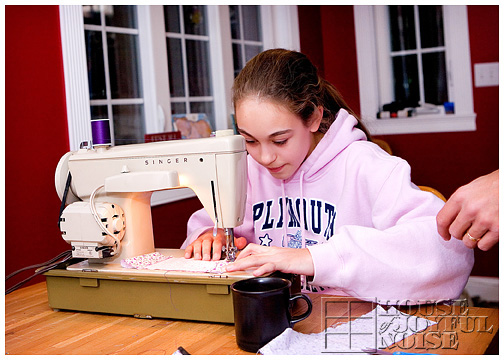 Then {A} happly sat down to do more too.  But Daddy was itching to get in there!  Seeing his hand??  Next thing we know, he tells her “OK, time’s up!!  It’s my turn.  Let me in there.”.  Maybe a little uncomfortable to announce this, but not as eager as he was to have another turn, apparently!! 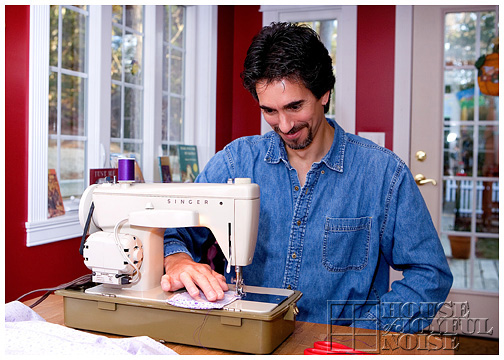 Oh ,,,,just look at the show-off sewing with one hand. Cute though, isn’t he??

The little ones were helping too, on another part of the project.   They LOVE projects of any kind.  Family crafting is the most fun.  Usually. : ) 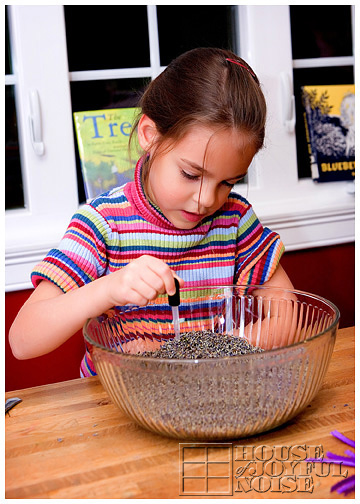 Our little dolly, always willing to roll up her sleeves and get to work.

Maybe you can guess what we made on this day?  Probably.  The great thing is, besides getting one project done, is that we know how to sew with a machine now!  Granted, we’re not pros, but {A} may be before long.  She’s pretty ambitious at that machine on just about a daily basis.  You should see the the little things she’s made already!

Gosh….my girls, AND BOYS, just may get that genetic-domestic bone thing.