We have a de-LICIOUS roll recipe coming right up, submitted by a regular and loved blog reader, Paula.  But first, we just wanted to share with you some of our oldest daughter, {A}’s,  creative cookies she made last week.  (She is an ambitious baker these days, if you don’t know.)

{A} has a very strong interest in the Kennedy Family, and has as of late, been studying their family history in great depth.  That’s  not to say she is a fan of all of them. ; )  But, she does like who Robert F. Kennedy was.  So much so, that she made sugar cookies for his birthday on Friday, November 20th.   She thought it was a great excuse to practice her piping skills. 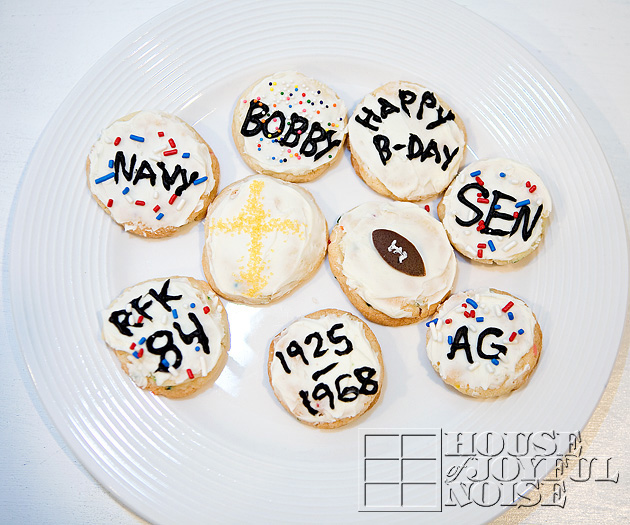 There were many duplicates of these cookies above, so this is just a sample of each design.  She even had more detailed pre-sketches on paper, but realized they would be really hard to pipe.  I think they came out really cute though.  I also think it’s cute that she made these. lol

On a side note, I just wanted to mention that we’ll be doing a little renovation on the Home Page (just a little one).  So if you notice things are out of sorts at any point, that’s why. : )