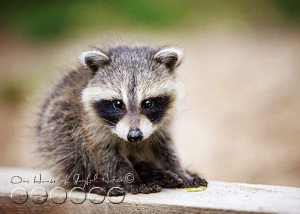 Some of our most exciting homeschooling lessons, often times turn out to be ones that were not part of my day’s lesson plan at all!  Like the countless opportunities of teachable moments  that pop up throughout every single day for us as parents/teachers, to utilize in educating and guiding our children down the right paths, we’ve had many days, where a lesson to study has sauntered right into our yard!  And it can be a darn cute lesson!! 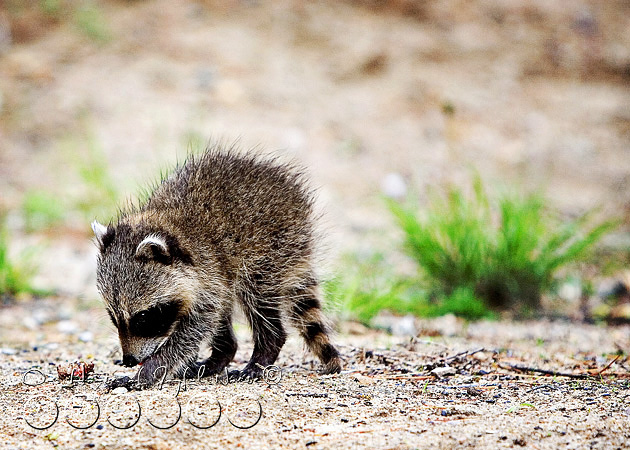 Such was the case the other day, when we spotted this baby raccoon, right up on the hill, outside of our school room windows! (For the sake of reference in this post, we’ll assume the baby was a girl.)  She was enjoying the banana peels & strawberry tops we had thrown out there. 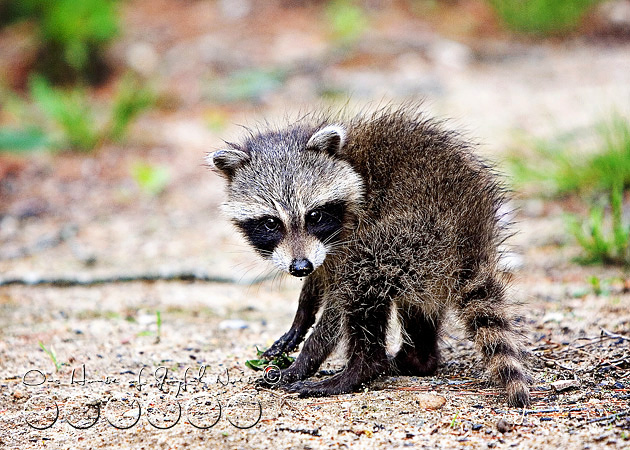 She was poking around and frolicking about up there on our hill, all afternoon, and gave us plenty of time to study here, research facts about baby & adult raccoon, and of course as always, abandon all self-control, and take more photos than necessary. : ) 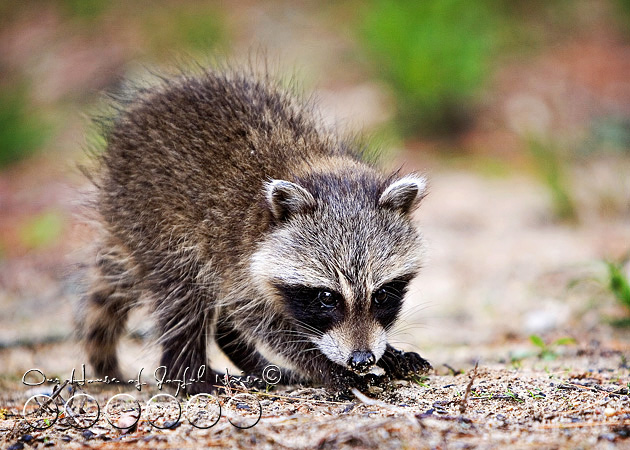 The kids get so very excited, when we spot wildlife, whether it be here on the homestead, or out in a (small) worldly travels.   We all learn so much, gathering both fun, useful, and definitely good to know kind of facts!  So as we share with you all of the photos of this adorable masked critter, we’ll also share with you a lot of what we have learned, as our unexpected study unfolded.

Maybe you’ll learn a new thing or two about raccoons, that you didn’t know before! (We sure did. That would be more than 2 things though.)  We’ll see. 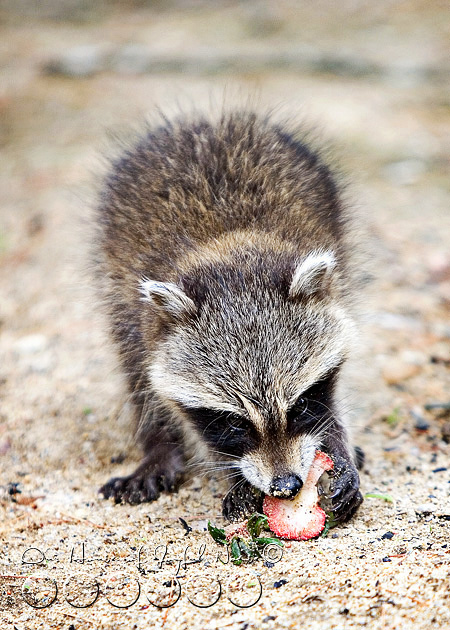 That would be winter, for raccoons.  January through the end of March.  Although we had some raccoons up in our tree one night around 9 pm, making ALL kinds of racket.  We could have sworn they were ‘busy’, if you know what I mean.  (HOLY LOUD!)  In fact, until we got further into researching, we joked that this baby was probably from once upon a night! 😉 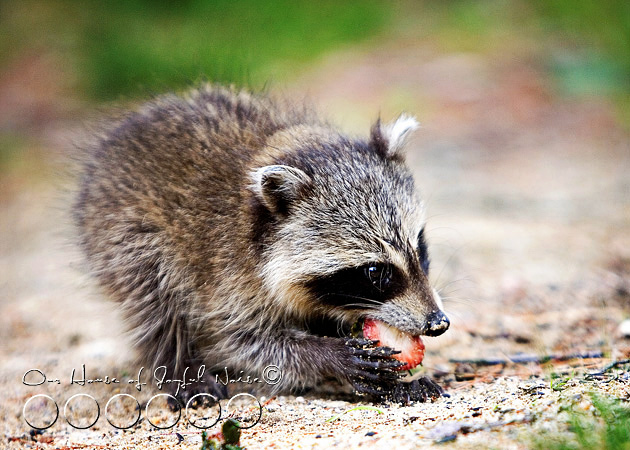 Baby raccoons are called ‘kits’.
They are born after 63 days of gestation, in the spring, and are born in litters of 4-5. They generally stay with their mother until the Fall, unless their has been some interference of the nest, or tragedies brought on by man or nature. 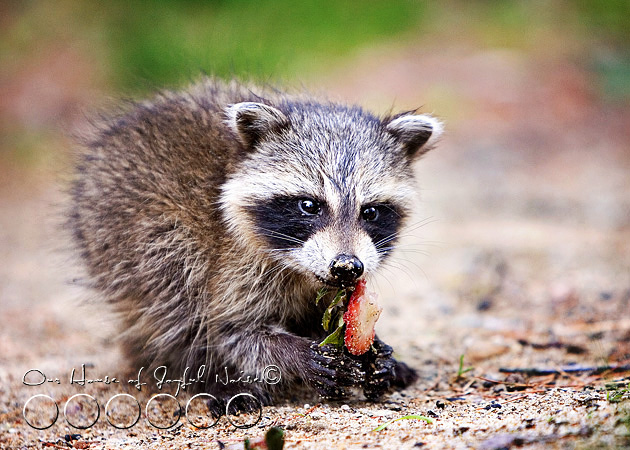 By studying the appearance and motor skills of raccoons at various young ages, we determined this kit to be somewhere between 8-10 weeks.   The mother was no where in sight throughout the day.  While I easily approached the baby to photograph her, I was keenly aware and cautious, of a mother raccoon coming out of nowhere to protect her young.  But I was brave (any risk is often small for a good photo!), and that never happened. 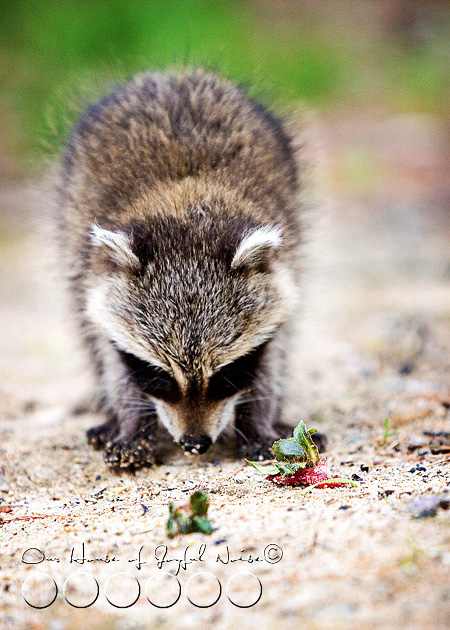 Raccoons grow to be about 12-35 pounds, and 12-28 inches long.
They are omnivores, which means they will eat most anything.  Both meat and vegetation.

It is not true, that raccoons like to wash their food before they eat it. 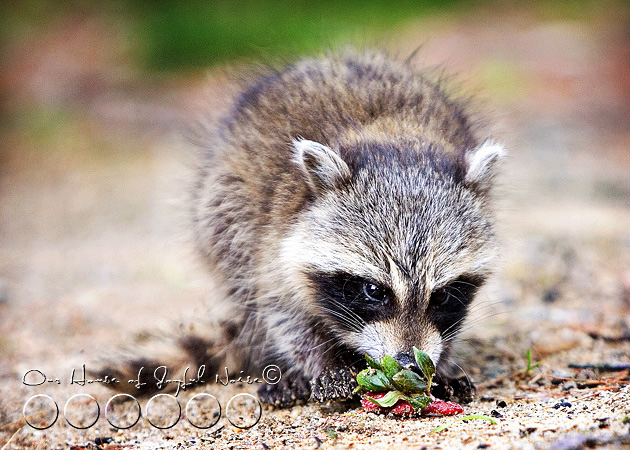 As we can surmise, by looking at these photos. 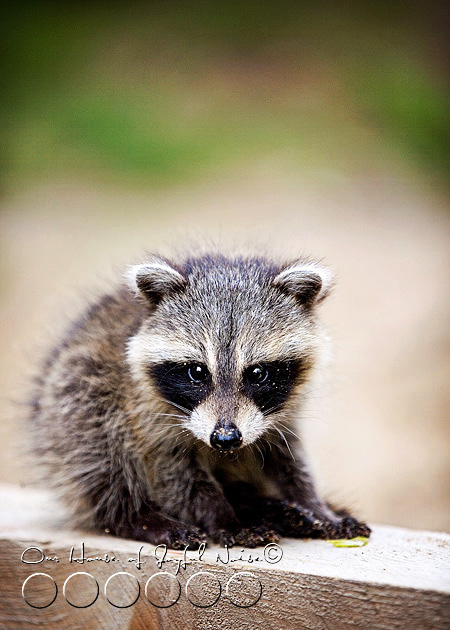 I know it is difficult to tell the scale of our little visiting kit here, but she was small enough that she could have sat in Michael’s big hand.

Another sign of how young she was, was her frequent fatigue.  She needed to rest a lot between activity. 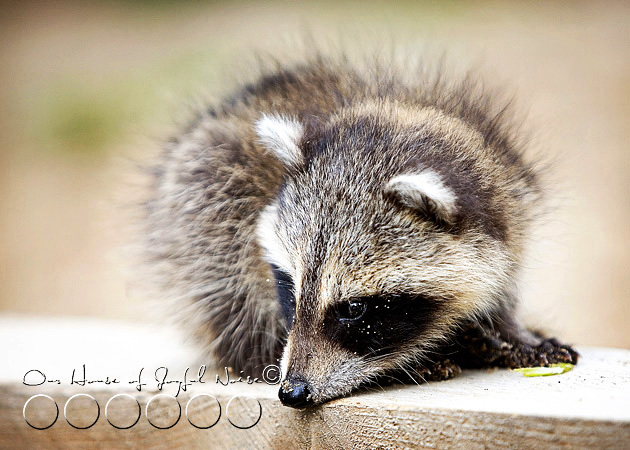 She had just scrounged around our hill, and then sat upon our retaining wall here.  I could see her growing sleepy, as I sat nearby taking photos of her.  Her instinct was to keep an eye on me.   But her instinct was not stronger than her will to stay awake.   In a matter of seconds, she put her head down like this, and then….. 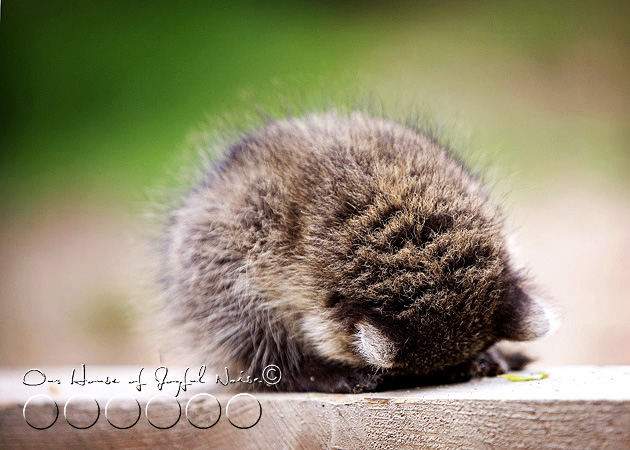 ….tucked her head, and curled right into a ball, for a snooze!
The desire to nap, was much stronger than her fear of me, or will to protect herself! 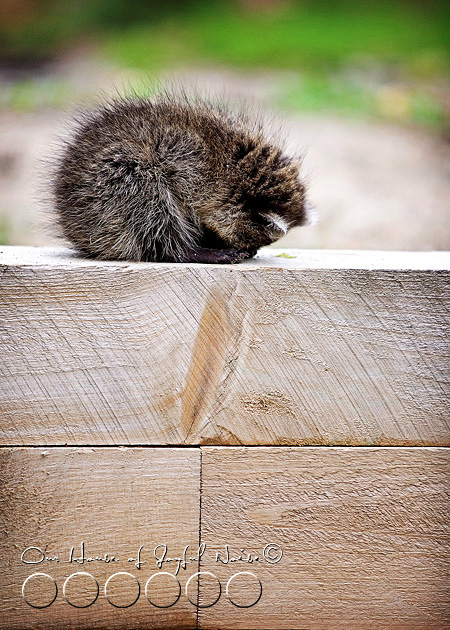 How cute is she?  A little fuzzy ball.

After her kit-nap, she had a little more activity, and then curled up into a ball once again, in a patch of sandy dirt up on the hill.   By then, we were observing her through our school windows, when it began to rain on her!!  We felt so bad for her, but she kept sleeping on.  So Michael grabbed a box from our basement, cut out a door, tip-toed out there, and put it over her. 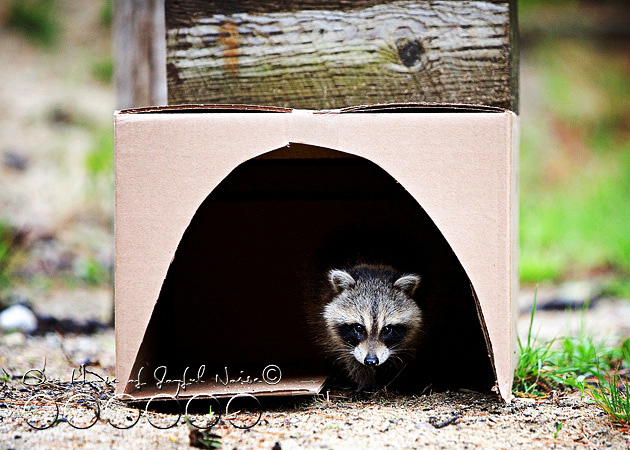 We carried on with our day, but soon noticed 2 things:  She had pulled down the flap of the box, to sleep on instead (smart little kit!), and then she was coming out for a little more exploring. 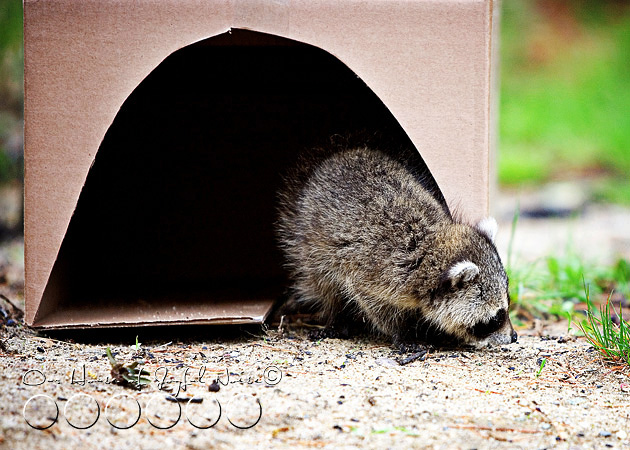 As much as we were tempted, and the kids were pleading their cases, it is not wise to keep raccoons as pets, for a variety of reasons.  They can be very dangerous, and keeping them in captivity would ultimately end up with a sad ending.

Adult raccoons have few natural enemies.  I think we as humans, dislike them more than other creatures, for their mere clever interference with our camping activities, and trash disposal efforts.  They are indeed curious, and clever.  Their front paws and back legs all have 5 toes each, and they are as skilled as human fingers. Raccoon have been witnessed to unlacing shoes, opening purses, and undoing zippers!  They are both great climbers, and swimmers. They are members of the ‘carnivora’, such as dogs & cats, but are also related to the panda bear. 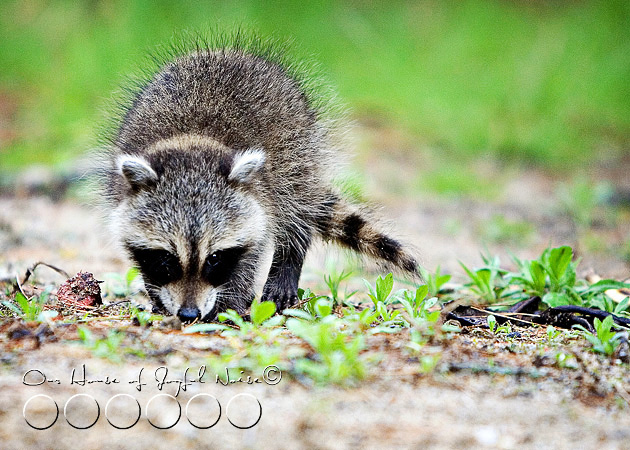 One of the most distinguishing features of the raccoon, is it’s black mask.
The purpose of their mask, is to reduce glare, and enhance their night vision.  As many of us have grown to understand through our own observations and experiences with raccoons, they mostly sleep during the day, and are most active, searching for the food, from dusk through the night. 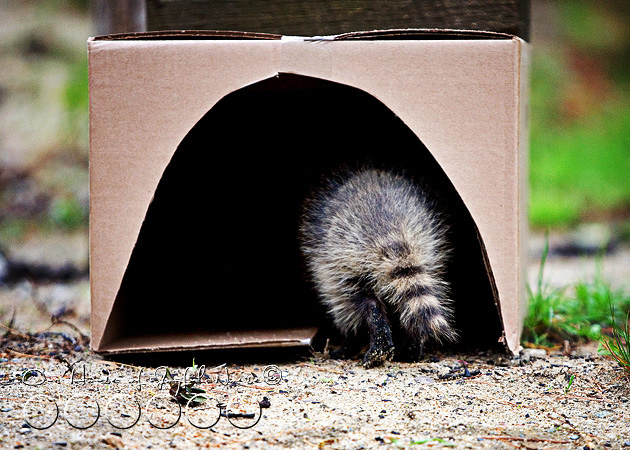 Our kit, who we had fallen a bit attached to, despite our best resistance (ok….the kids did not try real hard…), did not end up staying with us for life, as we had entertained notions of in our minds.  She seemed to like her box, but it didn’t turn out to be ‘all that’ after all.   She was in there for a good part of the evening and early dark, but later that night, she went missing. (As she had the freedom to do!).  My own mother instincts kicked in.  I had fleeting thoughts of going to search for her with a flashlight, and bring her home to safety. “She is still so small and helpless, ” I worried, “and prey for larger animals right now.”  But I knew…such is nature. And anyway…I was tired and wanted to go to sleep!

Michael was the first one up the next morning, at 6:30 a.m.  Kit was back by then, and he had the pleasure of watching her climb the tree stump, and roll around in the morning-dew grass out there, as cute as she is, while he ate his breakfast.  But awhile later when the rest of us woke, she was gone again. 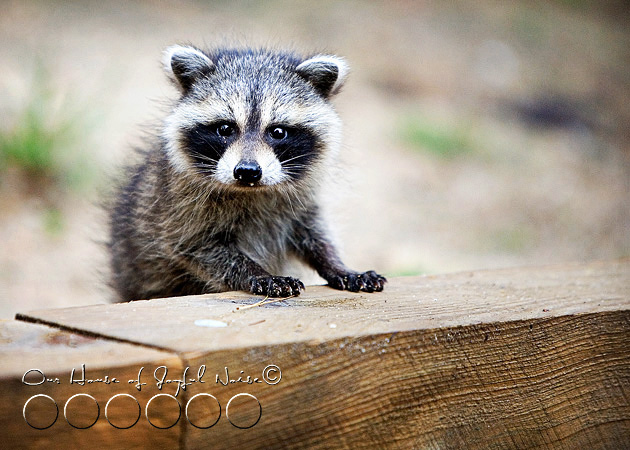 Our best guesstimate, as to why she was around with no mother in the first place, is that her mother was in fact close-by, sleeping in a tree, and kit wandered off to play.  And nap, as needed.  We have faith that she was not abandoned, as she appeared well cared for and fed.  She was just practicing her independence, but will not truly be ready to be on her own, until fall.

We amuse ourselves with how hopeful we are though.  The box is still out there.  None of us have grabbed it and broken it down.  I suppose we all carry the hope, that she may sleep away at nap time once again, and come to play and amuse us.   If only for a lovely afternoon, once again. 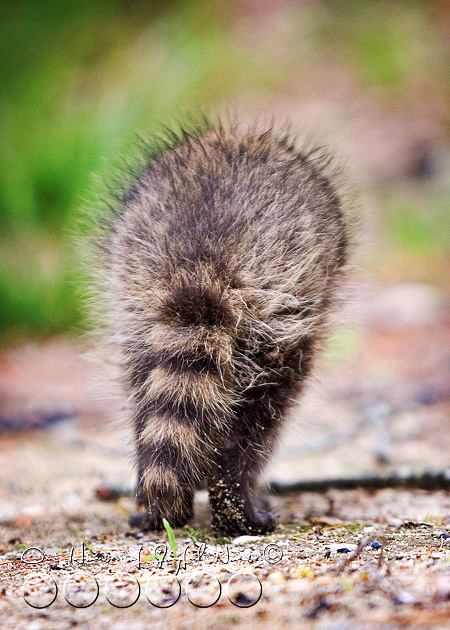 So did you learn anything new about raccoons yourself?  Do you have anything to teach us about them, that we may have missed?  What opinion have you formed of raccoons, based on your own experiences?  Are they a nuisance? Amusing? Clever? Cute? Please share your thoughts, experiences or facts, with us in the comments.