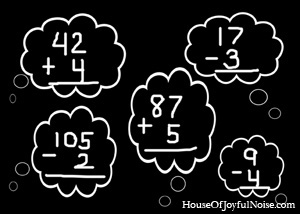 We’re talking about the beginning skills of math memorization, for little ones, today. Our Kindergartners ( {J} {O} {S} ) have been working on addition and subtraction  in their workbooks throughout this year. Their math curriculum (Horizons/Alpha Omega Publications) had introduced math problems in both numerical sentences, as well as stacked, and as of recently, even in math story problems. Their aid right along has been a number line on the page to use for adding or subtracting. They start at the given number, and count going forward (adding) or backward(subtracting), and the number they land on is the answer to the problem. I have thought right along that this technique was rather clever, in that the kids are learning now, for the future, how to line their number columns up properly as they write their answers, and to get the idea of adding some to, or taking away from, and just the whole general idea of how math works. It’s been the fastest subject every day for them, unless we add an extra math activity with manipulatives — like money or time telling.

So tonight right after dinner, I was working at the computer.  I had an order I really needed to prep, and was also just already burned out as it was, from an intense and exhaustive appointment I had today after schooling.  Michael had to run out to do something himself, so he was not around.  So I am working along and conversing with the kids at the same time, as I often do.

And then the math started……

From there, as he was getting them all right, I just went with bigger numbers, and he still kept nailing them.  Then {J} comes in because he heard all of the excitement, and wants some problems too.  “Give me some!  Give me some too!” They take turns, and it becomes an intense competition between them. {O} was busy and very focused copying an adult’s crossword puzzle. But the boys were not letting up on wanting more.  Addition, subtraction, big and small numbers, calculating in their head…and they were doing it! I think they were surprising themselves that they could do it! (I didn’t know they were ready to do that either.) There were no double digit addends or subtrahends involved, where carrying over or borrowing would be necessary, but still. Granted too, they were probably using their fingers, but hey…I still do sometimes too. And they are in kindergarten!

They really could not get enough.  It went on for a long time, as I tried to work.  I began hoping Michael would walk in the door any minute and take over being the ‘math problem pitcher’.  And he did, eventually.  He was pretty impressed with what we were doing while he was gone, and thankfully, was happy to take over.  I was then able to finish up my client’s order a little quicker.

The math game went on all the way through, and in between each hug and kiss for bed, and not doubt they’ll be begging to play again as soon as they open their eyes in the morning.  I’m grateful for the break tonight now that they are in bed, (although numbers are still flying around in my head, because that’s me) but also really amazed and grateful at how effective their whole curriculum, and lessons we’ve taught them, have been for them.  It is an advanced Kindergarten curriculum, but have really credited how each concept is introduced in a building, and spiraling, and building some more, sort of process, and have thought of it as just that;  Base prep work and building techniques for next year. But they are truly getting it more than that. And with JOY as they do.  That’s what I love the most.  Whether they get a concept or not — it’s that they have FUN learning that matters most to us, because eventually they are going to get it all.  But to see them truly understand and demonstrate it over and over is a satisfying feeling.  Seeing how much they are getting so early on, is encouraging. Because the truth is, I don’t think my kids are some unique geniuses, or necessarily smarter than other kids. And I surely do not need them to know everything now. It’s just the re-enforcement of our strong beliefs all along; that kids will learn more, and EMBRACE LEARNING, even CRAVE it, when they have fun doing it.

They have also been entertaining themselves, and each other, with memorization and recitation. All 3 of them are very fluent readers now, (well, all 4…lol) and they have taken to finding funny stories or poems in their abundance of books, and memorizing them, and then reciting them for eachother, or us…or anyone who will listen, in stores, or where ever we are.  Most of what they have a desire to memorize are the funny, very silly things, of course.  You know how, with kids, if something is funny once, it’s still funny the next 999 times.  So they take turns spouting off this poem or that, and they all crack up, and it just never gets old.  But this practice of memorization, that is merely a game to them that they came up with on their own, is just how education at home, in life, happens on it’s own. Yet it builds their memorization skills for the things they will HAVE to memorize for an assignment, or for functioning in life. Just like the scripture memorization they have done, they are acquiring various valuable benefits and skills from the ‘game’.

I just had to express what….contentment I feel tonight.  Again. About this life of ours I love, and our decision to homeschool. These are the moments, that we have every day, that show us the fruits of our ‘labor’, if you want to call it that. To see the progression of their skills and gain of knowledge every day, as they display it for us in various ways, with such HAPPINESS and pride in themselves, IS the reward and the pay-offs. We wouldn’t want to miss one minute of the amazing progress for the world; from introduction of a new concept, to seeing the lightbulb in their head go off, to them grasping and running with it with such enjoyment. Just living, loving, and learning, every day.  That’s what it’s all about to us. Witnessing these moments, is something we treasure and are so grateful for, even if we are hearing one thing or another for the 1,001 time.  “Listen to this, Mama”  “Watch me do this, Daddy! Look!”  “Mama, see what I can do?”   “Watch me again!”

Yes, we will always listen and look. Sometimes with eagerness, and sometimes with some real scrounged up patience, when we are trying to accomplish something of our own, because it matters to them. It is life. It’s the learning process of little ones, and it is the love of learning, growing, and the satisfaction of new accomplishments and skills they can each call their own.  And there can never be enough. There will always be time for such things. It is all gifts, our gifts, receiving gifts, and just multiplying before our eyes.

So bring it on, kids. We will listen, we will look, we will cheer, and we will clap, as all 4 of you realize there is nothing you cannot do, with hard work, desire and determination, and the grace of God.  The rewards are all yours.  And it is enough for us to just listen, and watch, over and over again.