Our three second graders, { J, O & S}, have been working pretty hard in math, lately.  They were getting stuck on a particular concept, and so taking advantage of the perks of home schooling, we didn’t move on in their workbooks until they ‘got it’.  We had some extra long math classes even, working on that concept.  So I decided we needed a little FUN with math, today, and made up a couple of games.

If you have any kind of BINGO game, with whatever pieces to draw numbers, you can do these math games with your kids.  You can also alter how the game is played, to suit the age and skill level of your own kids.   So I’ll share with you how we played, and maybe have a suggestion or 2 of how you can make it easier for younger grade level kids.

First, because we’ll be doing math ON them, a piece of paper has to be set up as a BINGO card, for each child. It doesn’t have to perfect…..ours sure weren’t.  I just did the example below, on the computer, for this blog post.   But we did ours on regular loose-leaf paper.  I let the kids draw whatever shape they wanted in the center FREE box. 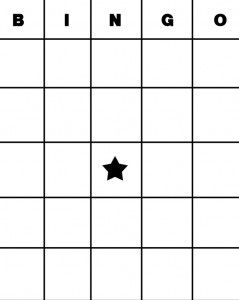 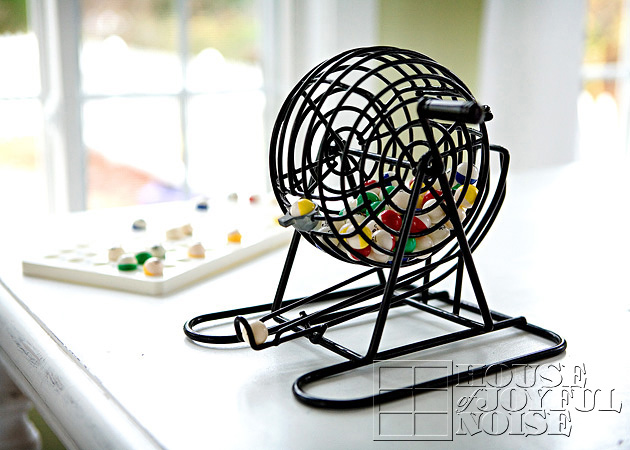 This is our BINGO game.  You will not need the real BINGO cards, or the chips for the math games WE played.  But later, I will give you an alternative game for younger kids, where you can use the chips on the cards.

So once everyone’s paper is set up as below, you are ready to start the game.    You draw the first call, and announce the letter and number. (Example, say it is N-31.).   The can put that 31 in any box to start, under the N, but each number needs to be somewhat in the middle of the box, for room to do math with it.  As letters and numbers continue to be called, they can continue to choose an empty box to put the number in, under the corresponding letter.  Again, when the kids write a number in a box,  they need to leave room above that first number, as well as below it, and of course the math sign to the left. 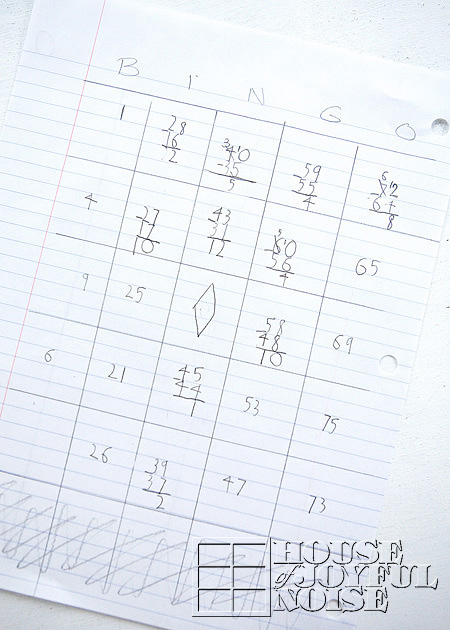 The paper board will start to look like this.  Notice, the first numbers are put int he middle of each box.   So for a little bit, you’ll call letters/numbers and only have one number in each box around the board.  But eventually, one of the LETTER rows is going to full up, already having a number in every box.  As you can see above, N’s row has a number in each box, all the way down that row.  So, once we get another N call, the real math will begin!

So here is how WE played.  Each child could continue to choose any N box (that already had one number in it), but where to put it?  Well, after choosing which N box they were going to use, they had to figure out if the 35 was higher, or lower, than the number in the chosen box. 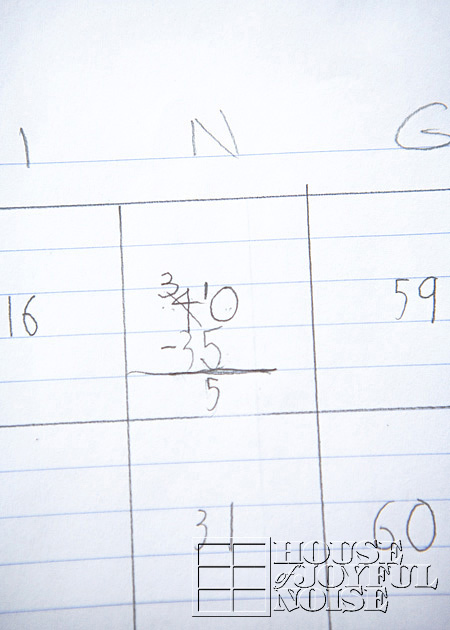 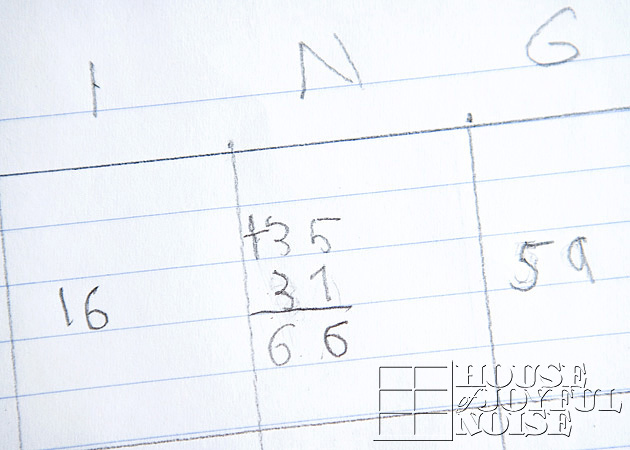 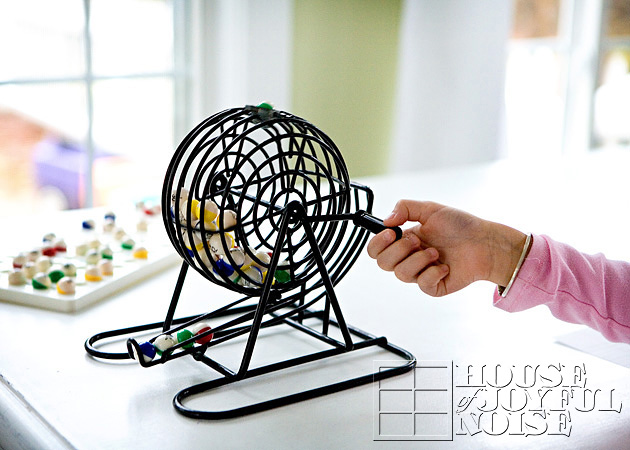 We continued to draw letters/numbers and kept the game going in the same pattern.   To refresh: 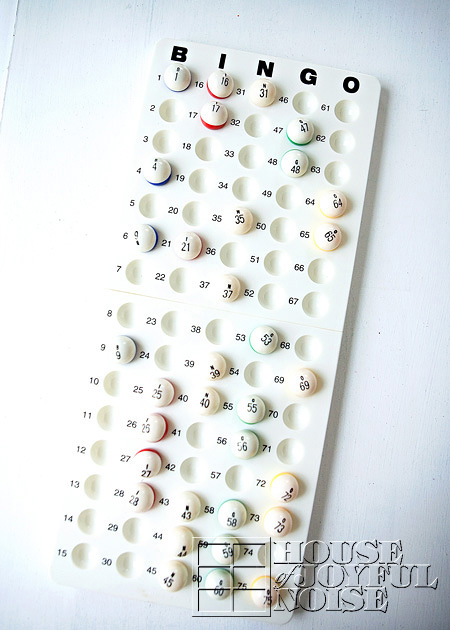 As I drew letters/numbers, I put them in the holder tray….just as you would put the numbers/letters on a master BINGO card.

We played until someone had BINGO….which, as this game goes, everyone should have had at the same time, if they were listening carefully and putting the called numbers, under the correct letters. 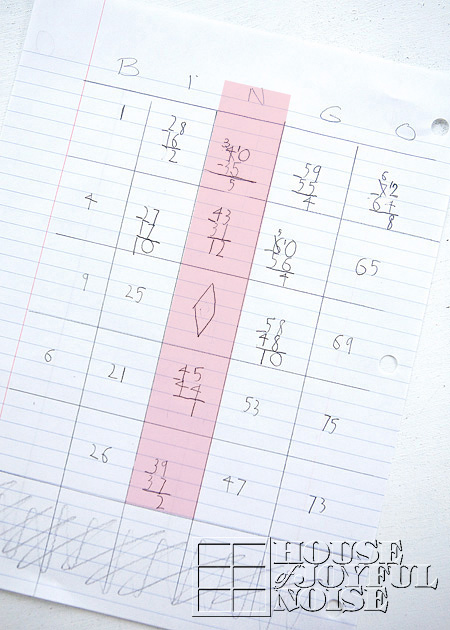 N down was filled first, until everyone had BINGO.  But they didn’t officially WIN, until their row was corrected, and all answers were correct.  ;  )

*1) A YOUNGER VERSION:    Instead of doing MATH per-say, children just learning letter and number recognition, can use the real BINGO cards, with the chips.  They can wait until they have a row filled to call BINGO, and the teacher can use their master Bingo card, with the chips on it for called numbers, to correct if they identified each number and letter correctly.

*2).  For a LITTLE BIT OLDER children, who are working on WRITING and correct letter and number formation, can simply write the one number called, under the correct letter, until they get BINGO.  At that time, correction can be done in the same manner as 1) above.    In these case, no math is done.

*3)  Another option, is to play the game somewhat as we did, doing ALL ADDITION,  only.

* No doubt, with a little brainstorming, you can come up with your own ideas for math games, using these suggested tools, to fit the needs of an and all kids of all grades and skill levels.  Have fun with it!

For younger kids, using a Tic Tac Toe version may be a quicker game.  And again, doing all addition at first may be easier.

We followed the same concepts as we did for Math Bingo, but applied it to Tic Tac Toe, with the goal of getting 3 (correct) in a row. 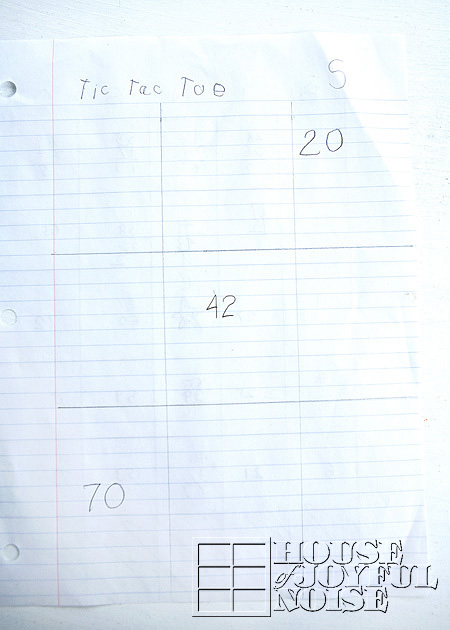 They put the first number called, in a different box, aiming for 3 in a row. 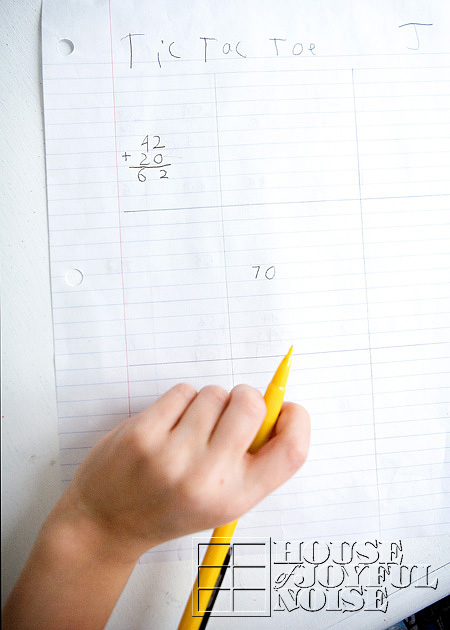 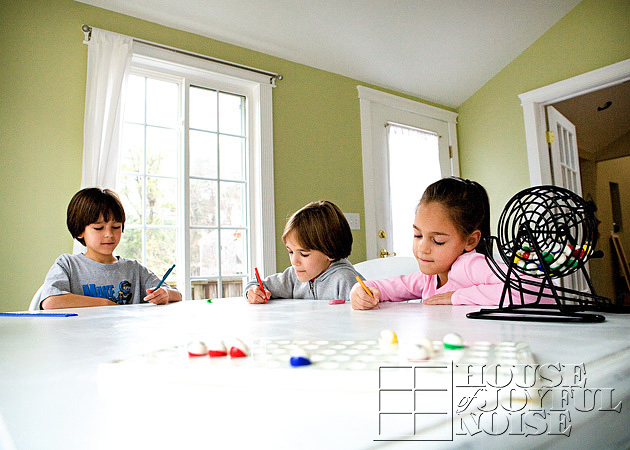 Oh the suspense….WHO is adding and subtracting correctly?? 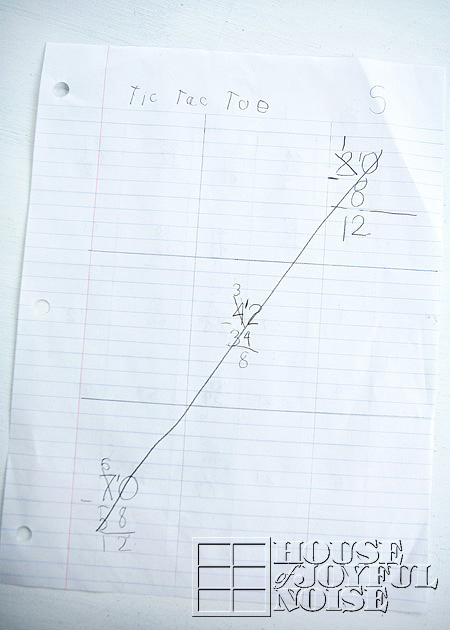 Suddenly, everyone was yelling ‘Tic Tac Toe!  3 in a row!!” But was their math work correct?  They were.  We had 3 winners, although one of them almost forgot to bring down a number, and noticed right before I was about to check!

I hope these games inspire you to play with math, with YOUR kids!!  I make up games all of the time, to help instill lessons for life, in the kids.  If I can, I get them out of their chairs, and outdoors, if possible!  After all….as I say all of the time…

LEARNING SHOULD BE FUN!!!