So here we are at the big reveal! {A}’s haircut, before and after!  (I wonder who is already skipping the jabber and scrolling right to the bottom right now! lol) Patience, patience! (I test your patience, too, with my overdue posts…don’t I?  ;  )  Us girls just LOVE this stuff, though, don’t we?

I really AM going to get RIGHT to it!  But I just wanted to mention, very quickly, that you can expect to see most photos in this section of the blog, watermarked with my logo. Especially the portrait type ones.  It’s part of my work flow in posting portrait work on the web, and necessary for this new business blogging section, for all of the clients coming for whom I’ll be posting sneak peeks for here. (Awesome stuff coming up near the end of August or so.)

Ok, back to the intent here.   On the way to salon, I had to take just a couple more before photos.  In a ponytail, is how {A} most always wore her hair, every day.   So we really needed photos of her with her hair pulled back as well.  I loved it when she wore it down, and if I asked nicely, sometimes she would appease me.  But a ponytail was the typical daily style. Just like this… 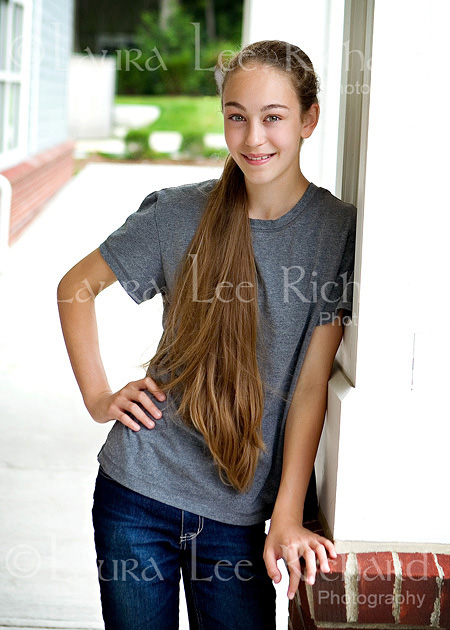 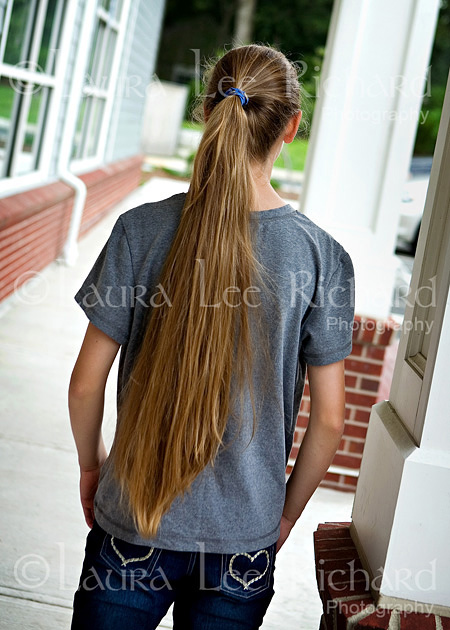 And off we went to the salon.

Janine Cliffe is our family hairdresser, and has been for many, many years.  She currently works for Shear Creations on Long Pond Road in Plymouth, MA. (No web site.)  She was Michael’s stylist first, for several years, and I think became mine when she came to cut my hair when I was pregnant with the triplets!  I was on complete bed rest, so listen to this:  She cut my hair, with me lying down, on a full length reclined lawn chair, in our kitchen!  It’s true!  She passed that test, so I kept going to her.  Then around the time that the triplets turned 1 year old and needed their first haircut, she instantly gained 3 new clients!  It was then that we started hiring her to come to our home on a regular basis, and when she does, she does Michael’s hair, the triplets and sometimes gave {A} a trim.  Most times I choose to go to the salon, though, because I am often having something else done besides a cut, and I want Janine comfortable with the bigger jobs. 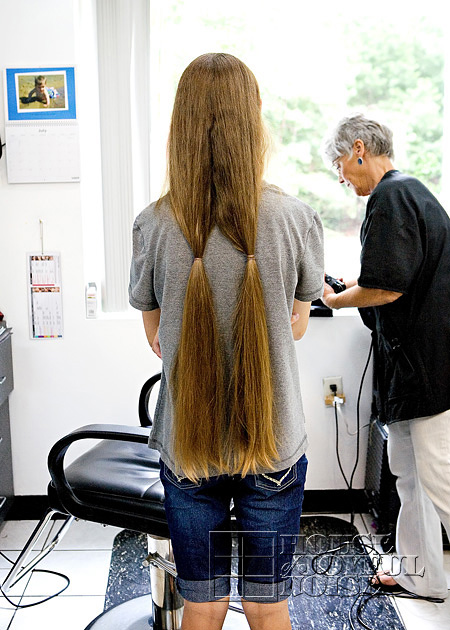 Almost time for the cut!  YIKES!  It was bitter-sweet. It still is, actually. She has SO much hair, Janine divided it in 2 side by side ponytails, which I thought was a smart start.

No going back now! 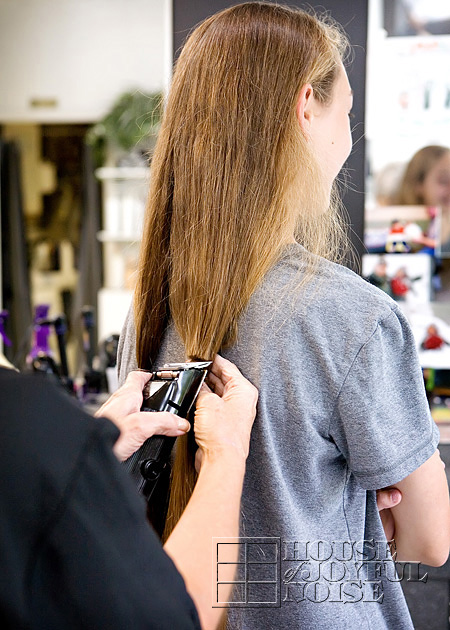 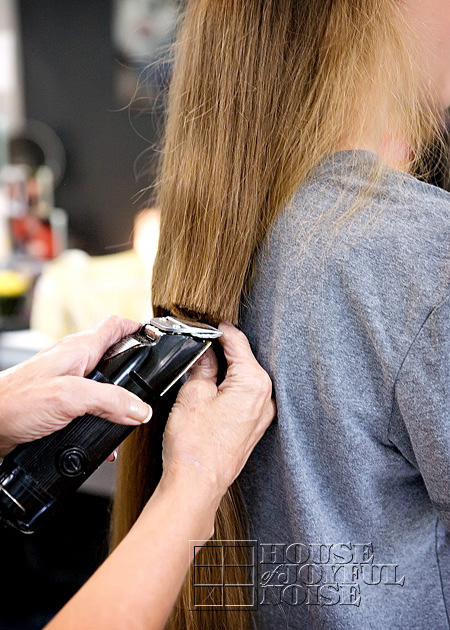 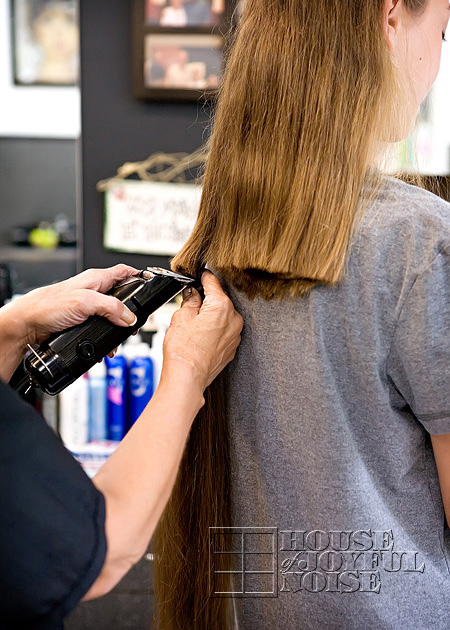 “Oh-my-gosh.”  (I think I said that 100 times when I was standing there, in between deep breathes.) 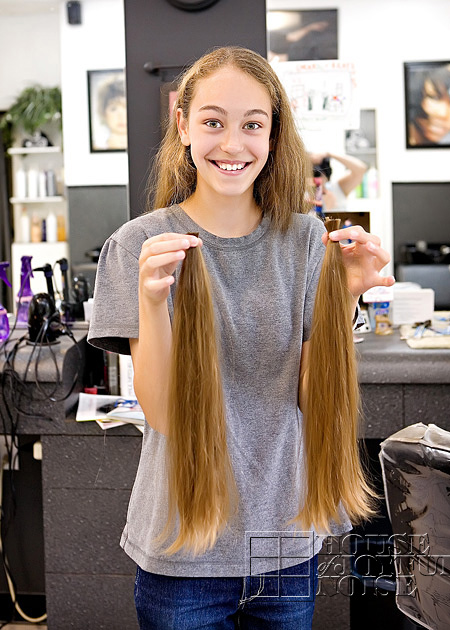 What an odd little photo. lol

After the razor chop, Janine cleaned it up nice with her scissors. I just didn’t take more photos then. I was busy, recovering. 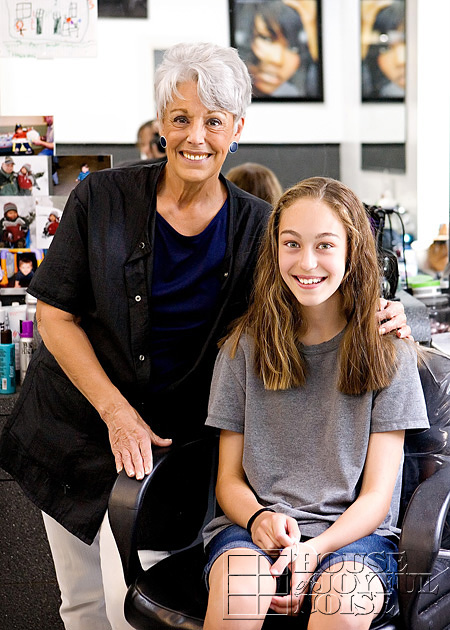 That’s Janine (Cliffe) on the left.  She’s so pretty.  And the BIGGEST RED SOX,  PATRIOTS and CELTICS FAN you will ever meet. I’m not even kidding.   She’s very cool.  She didn’t charge us for this special cut, either, which was SO nice. (Thanks again, Janine!!)

A little while later, after some shopping, and some of my favorite comfort soup <sniff, sniff>, Panera Bread Broccoli & Cheddar, we stopped on the way home and got some after shots 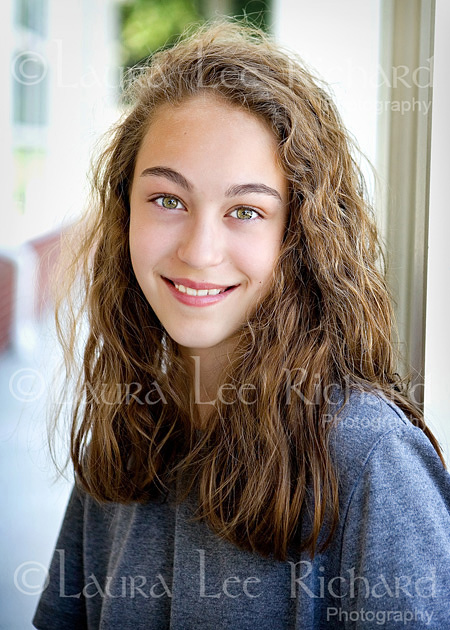 How do you like it?  Can you even believe the curl and waves now?  I knew before the haircut that her new hair was growing in pretty curly, and figured some was weighed down. But I didn’t expect this!  Michael has some crazy thick hair, and TONS of it, but he keeps it short and spiked.  I think {A} must get her hair from her Daddy (As well as the crazy long monkey- toes, but that’s another story.). No one would believe how heavy her hair was.  There was just SO much of it. 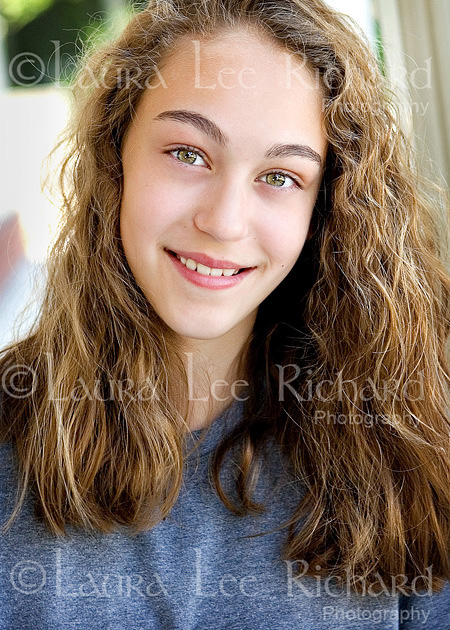 She gets her crazy eye color from my mother.  Michael and I both have brown eyes. Mine are a medium golden brown, and Michael’s are more black-brown.  I really loved how her hair came out.  I think she’s a DOLL anyway!

It would be weird to end with that photo….so here is the before and after, one more time, one right after the other.

Tell us what you think! And was this fun or what?!