I’m a planner.  I plan everything.  Call me not-very-fun, but there is not much I do spontaneously.  Especially when it involves, like…..a whole day. Or traveling a small distance.  Or worse……changing plans I already planned!

So when a friend of mine sent me a message one bright and early morning not long ago, asking if we’d all be up for a trip into Boston, to visit the John F. Kennedy Library & Museum that day….well, I started having heart palpitations, and immediately started brainstorming excuses to say no.  For examples:  I had a full day of lessons planned!  The kids had a test.  My camera battery wasn’t charged! (My gosh!  I can’t take a field trip without taking photos!  How would I blog it?!)  And honestly… I had work to do after schooling the kids!   And…and….I hadn’t planned, on going to the JFK Library & Museum!   I can’t just TAKE OFF like that!

All of those things were the truth.  But it was also true, that going to the JFK Library & Museum, had been on our field trip agenda, for at least a year, and we just hadn’t gotten to that one yet.  And my oldest  daughter {A}, had been nagging me about it all-365-days, (or it’s seemed like it anyway), because she’d been dying to go.  Beggin’. She has a deep and peculiar passion, for American History, for a 13 year old girl. She loves to learn about past U.S. Presidents, and especially has a keen interest in the Kennedy family.  My camera battery could charge in an hour.  Also,  my friend’s kids had a 1/2 day of (charter) school, and therefore would be out early, so that’s why it was a perfect weekday for them to go, with us.  But the truth of all truths was…..it could turn out to be one fun and exciting day, if I could just wrap my brain around <gasp> changing plans, last minute. 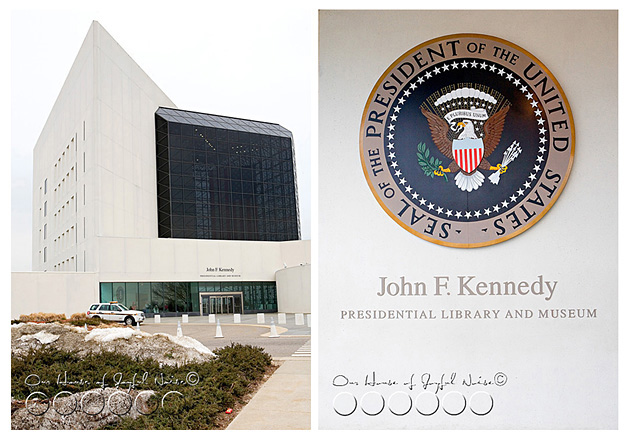 It actually turned out to be a very, very interesting trip.  Downright fascinating, at times.  It blows me away, because I could have cared less about American History when “I” was in formal school growing up, on top of several other subjects.  Or, all of them. (Except art of course!).   But I just love, love, love schooling now. As I always say, “I’m being re-schooled”, while I school my kids. And I thank God they are loving it, the first time around!  Because 13+ years is a dang-long-time, when you don’t like school! (Ask me!)

So…..let me show you some of the things that we got to see on our field trip, and intriguing things we got to learn more about, at the JFK Library & Museum. 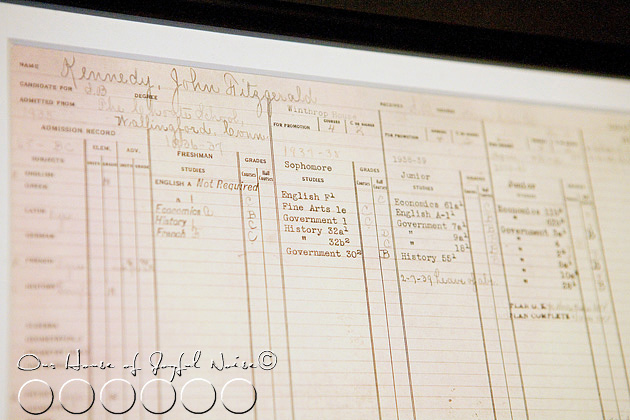 THIS….Is John F. Kennedy’s high school report card/transcript!    But here is what is sooooo interesting.  If you look closely, you will see….. 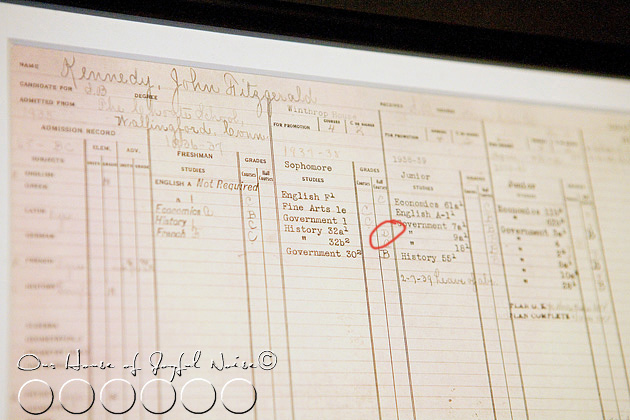 …..He got a D in his Sophmore year!!  IN HISTORY!  Did you know this?  Because it’s quite a shocking revelation, to me!  Now, {A} is a little upset with me, that I’m telling you about this.  She says, “But Mama!  He really loved History though!  He did!”.  And she’s concerned I am embarrassing him.  To which I replied, “Well, Honey, you know…come on.  He’s dead.”  And also, “It’s in a public museum!  I think more people blow through that place, than my little ole’ blog, in a day. Don’t you?”. Because I just feel the need to tell you all!  I find this little tid-bit of info shocking, but also encouraging, to children everywhere!!  As I see it, if a kid can get a D in History, and go on to be the President of the United States, there is hope for anyone! 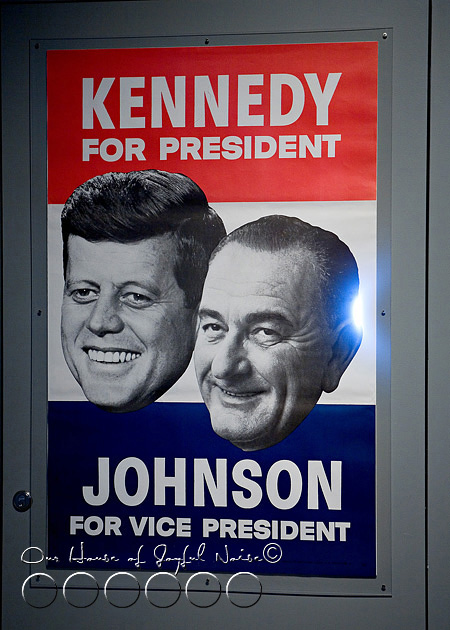 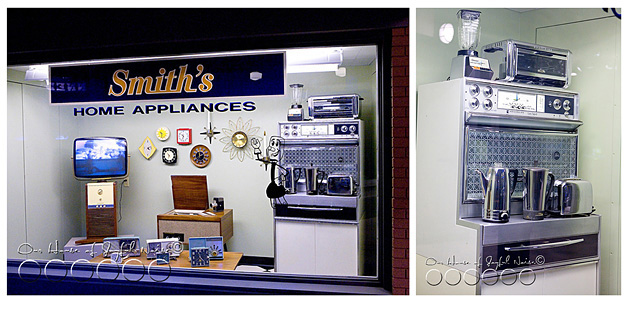 Check out the appliances of those times.  My three 8 year olds just stood and stared through the window here, dumb-founded. 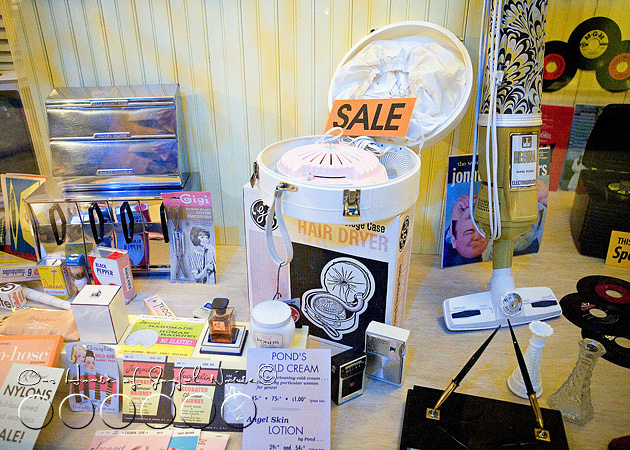 This display really got me.  As an educated graphic and package-designer, all I can say is….it is really no wonder, why the decade following the 60’s, involved tie-dyed shirts, and psychedelic-color-inducing drugs.   I mean, I do understand there was printing limitations, and limited inks to work with then.  But goodness…..what horrid looking packaging. It all looks the same!  Honestly, I had to walk away, as depression was setting in.
– 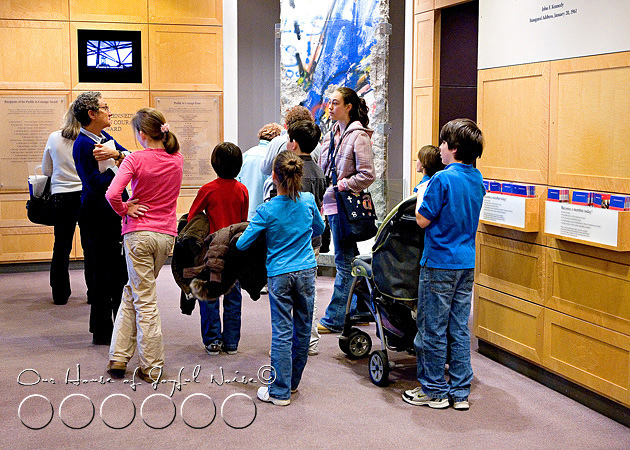 We had a great tour guide.  She popped in and out, as we made out way through the place, giving us more info here and there.
– 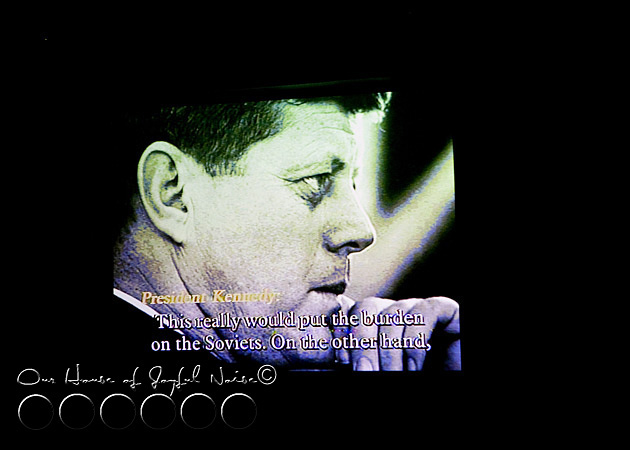 There are mini theaters there in the museum, and we watched two very interesting films.   I can say that in my own experience of watching these films, I was able to really feel more connected to exactly who JFK was.  To see him in motion, and hear him speak, in his own words, was…fascinating, and mesmerizing.  He had a great voice!  I’m going to link you to some of the film at the end of this post, so you can experience it yourself.  In case, you know, you’re as young as I am. ; )
– 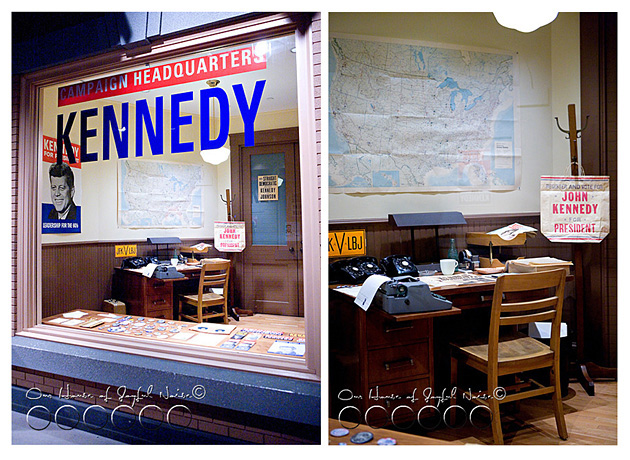 A mock set-up of (one of?) his campaign offices.  I desperately wanted to take the desk, and the chair. And maybe the door knobs.

The pavilion, was a cool place to be.  All glass and steel-work, overlooking part of the Boston Harbor.  To think, that JFK and his siblings’ great-great grand-parents, had at one time sailed right by here on their arrival to the United States from Ireland, in 1849, because of the “black potato famine”.
– 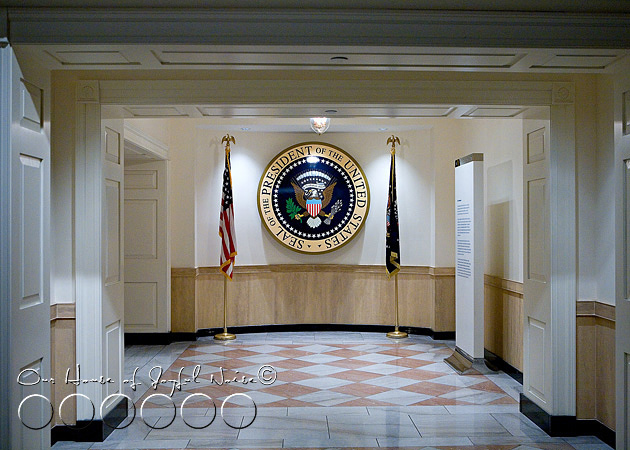 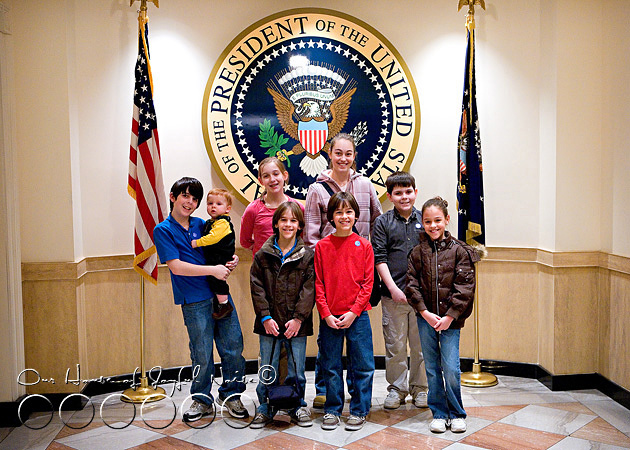 Our crew of kids. 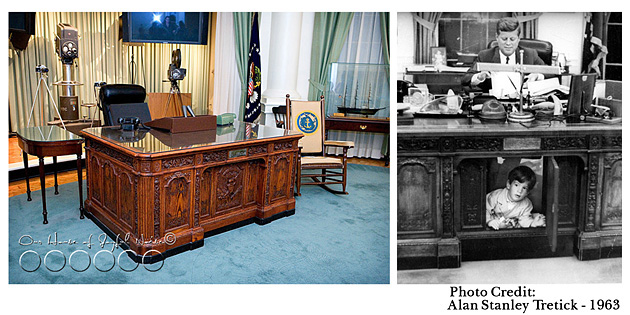 Here, a replica of the desk in the Oval Office.  It was interesting to note, that the little door under the front of the desk, that JFK Jr. was later photographed playing behind, was put in to hide Franklin D. Roosevelt’s leg braces.  They felt that, when photographing him at his desk, it may appear that the President of the U.S., was weak.   (Nice.)

Also interesting to note:  My flash went off when taking this photo of the desk, and I got in trouble.   Once a rebel, always a rebel! ; ) 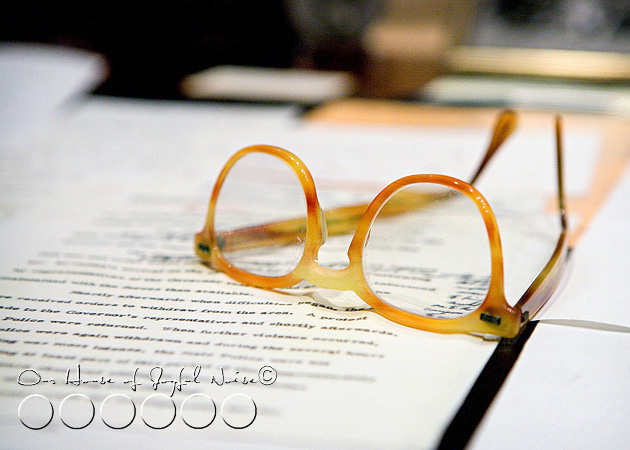 Call me ‘Silly’.  But this is my favorite shot of the day.  RFK’s glasses.

I actually took the shot, through glass.

They are on his  desk, shown more below. Robert was appointed Attorney General, when his brother was President. 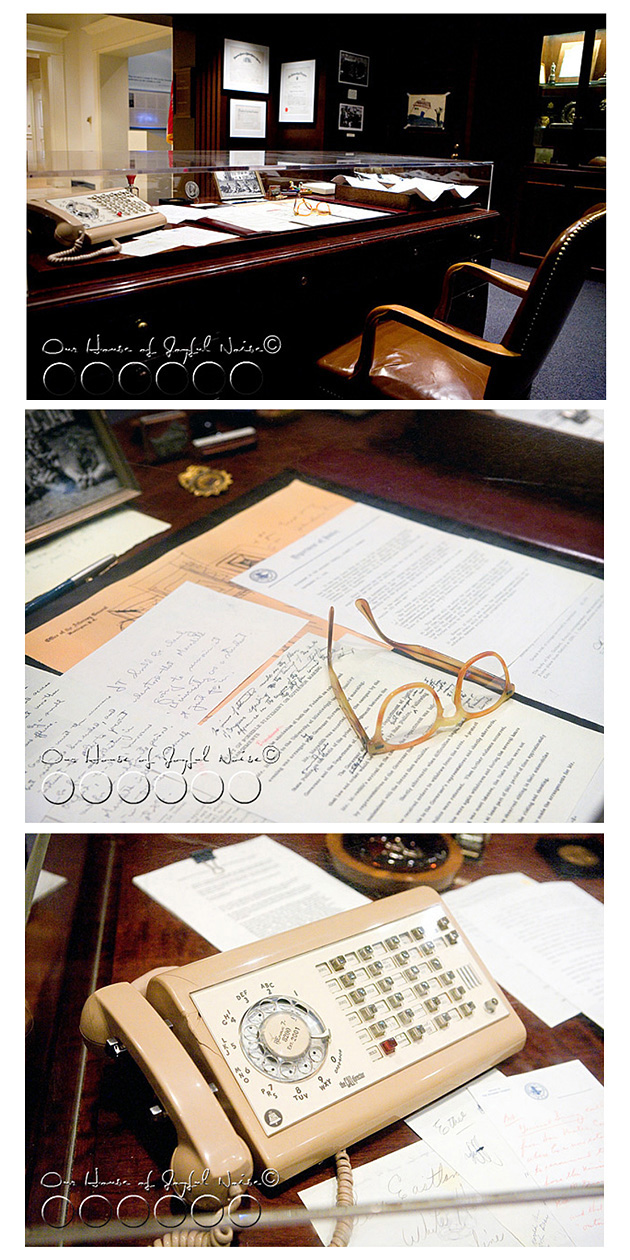 It was cool to read all of the documents and notes lying about the desktop.  And laugh at the phone.
– 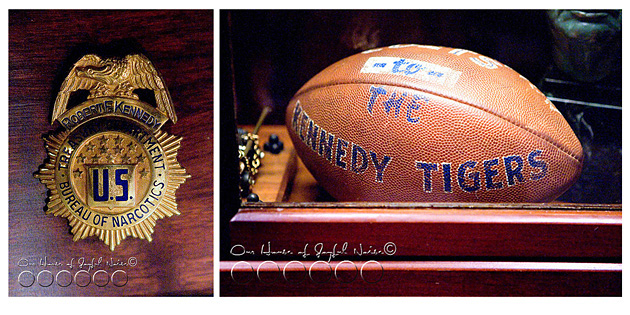 RFK’s Dept. of Justice badge, and the football that the Dallas Cowboys gave to Robert, because the Kennedy’s loved the game so much, and were known to play.

I have to be honest here…..some of these details I am not actually remembering all on my own.  {A} is over my left shoulder, dictating some stuff to me.  Lol.  Just keeping it truth, People! 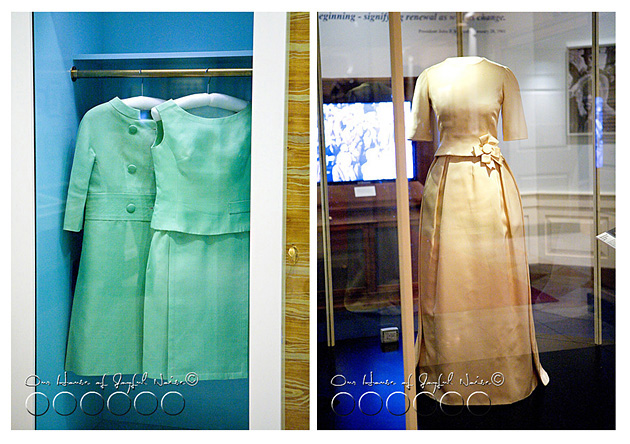 A bit of Jacqueline Kennedy’s wardrobe.  On the right is her Inaugural Ball gown.
– THIS, I do remember on my own.  I did not know, that Jacqueline (Bouvier) Kennedy was a photographer!  In a round-a-bout way, it was through her photo-journalism work, that she met her future husband, JFK.  I was saying to myself, out loud, “Well I’ll be a blue-nosed gopher.”  And someone said, “……What?!”
– The baby with us loved this purse.  He kept saying “Ooooo!!” (Short O sound.)   It was rather eye catching!
– 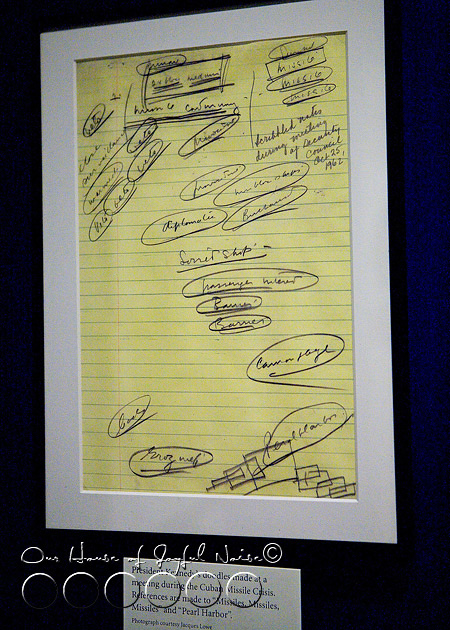 These are ‘doodles’ of JFK’s from a meeting during the Cuban Missile Crisis.  In the top-right, you can see where he wrote and circled several times, “Missile. Missile. Missile.”
– 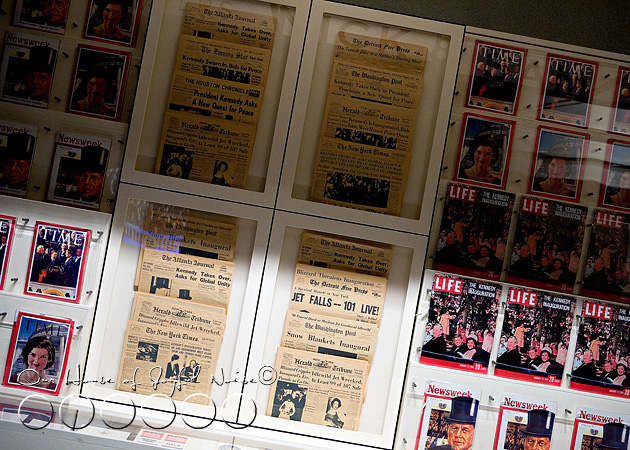 News publications from over the years.

There was another little room we went through, that was dark, and just had a few tv screens going.  Airing, was the news broadcast footage, of when JFK had been shot.  I can only imagine, having been born and grown enough then, to understand what was happening at that time.  Because the heavy feeling we all had in that room.  All silent, staring at the monitors, some with a tear rolling down our cheek.   I guess it’s the closest we’ll ever feel, to having been there.
– 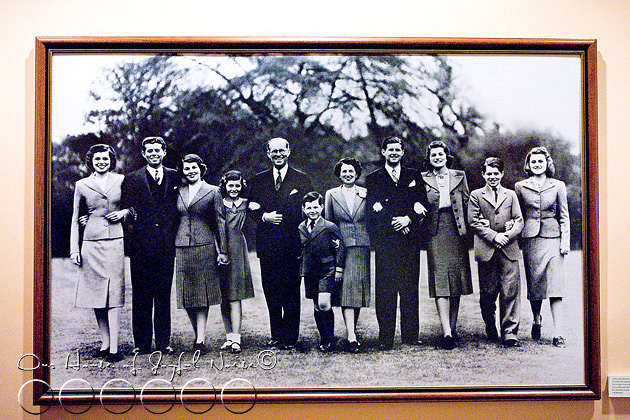 Oh how I would have LOVED to have taken this portrait!!  {A} walked up to this, and named every person in it, from left to right. As easy as counting, for her.    This portrait was taken, when Joe Sr. was Ambassador to England, and they were in London.   What a great photo. She’s got a dream. We all had such a good time, and learned so much, here at the JFK Library & Museum.

We highly recommend this attraction, if you are ever in the Boston area.

There was a great little still film clip on JFK we really enjoyed.

I was really glad my friend called, and I’m so spontaneous.

So…..Did you enjoy this post?  Did you learn anything new?