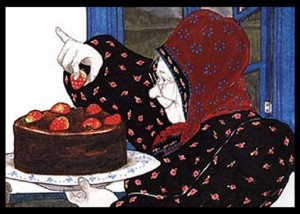 The kids and I have continued to enjoy the works of children’s author Patricia Polacco. We’ve read quite a few titles by now, but have many more to look forward to. The next featured author has actually been announced (and we’re really excited about her too!), but since we have all of June and July to study the new author and her works, we are going to stick with Patricia Polacco for another week or two.

We’ve enjoyed each and every story book we’ve read so far, as they each offer their own messages, values and amusement. The characters in all of them are interesting, especially knowing each of them are someone real in Patricia’s life, as are the stories, which are pretty closely based on some of her own childhood experiences.

One story in particular that we especially enjoyed, and the kids could really relate to, was Thunder Cake. It’s the tale of Patricia’s childhood fear of thunder. In it, her Grandmother helped her overcome her fear, by teaching her how to make Thunder Cake in the midst of the coming storm, which must be in the oven baking before the storm actually arrives! In doing so, her Grandmother taught her how she is braver than she realized.

Our little ones are no longer afraid of the thunder, but they remember well when they were. We always counted slowly, from the flash of lightening, to the boom of thunder, to determine how many miles away the storm still was, and when it was getting closer. It helped the kids to know just when that big boom was going to happen, and kept them more focused on the game than their fear. Patricia’s Grandmother used the same tactics in the story, to gauge just how much time they have left, to get that cake in the oven!

Making cake would have been a great distraction too, although we’d have been doing quite a bit of baking in the middle of many nights! But it seems we’ll still get to experience the rush and reward of baking a Thunder Cake, for when we turned the very last page of the story, there was the recipe. My kids all started jumping up and down when they saw that! So we’re getting all of the ingredients on hand in the house, and we’re just waiting on the next storm. 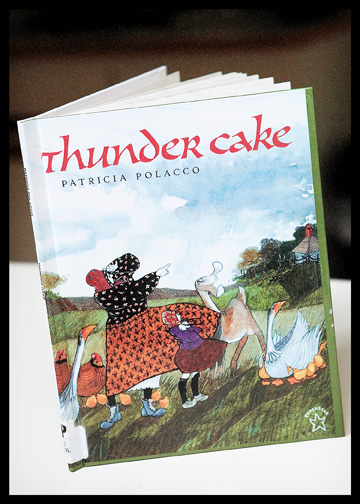 Aside from enjoying our snuggley, cuddly story time, the kids are also writing and creating drawings based on the Polacco stories they have heard thus far. They have done some copy work, written their own sentences about this or that, and drawn and colored pictures, which all go into their own Author Fiesta 3 ring binder, which they are so excited to have. {J} especially has been excited about having his own notebook, and just wanted to keep working on one thing after another, to put in it. I finally slowed him down a little with the promise that I have a new notebook assignment the next day. {A} is researching and gathering info to first write an outline, and then a report, on Patricia Polacco and her works. She did a beautiful drawing today based on Thunder Cake, as did {O}. {S} chose The Lemonade Club for his artwork, while {J} chose The Keeping Quilt, because he really, really wanted to make a picture of that quilt! (And it really, really made me want one of my own even more!)

The more they fill their notebooks, with the pages of writing or drawing that they worked so hard on, the more they treasure them. I know I wouldn’t have had an ounce of trouble keeping these kiddos from reading, writing and being creative through the summer, as it’s things they just love to do (for which I give praise to God for) — but what an exciting way to keep it going. We have truly been enjoying this exploration through children’s literature! And we’ll keep doing it, in our own leisurely way, for as long as we are. 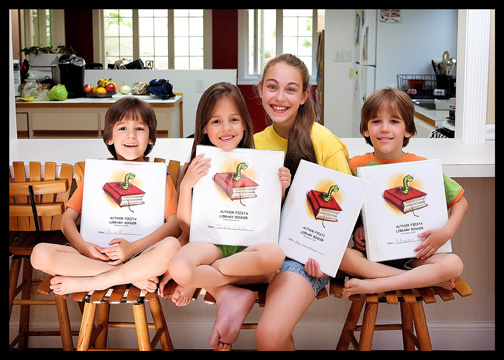