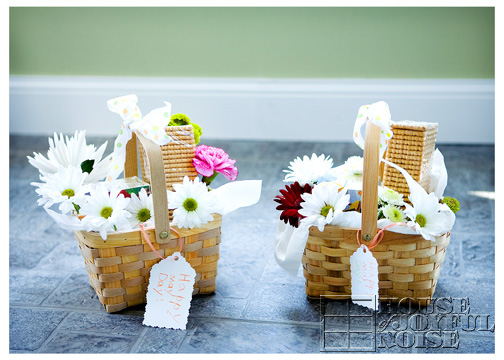 (Our May Day Baskets)

May Day
by Evaleen Stein

Let us take our baskets early
To the meadows green,
While the wild-flowers still are pearly
With the dewdrops’ sheen.

Fill them full of blossoms rosy,
Violets and gay
Cowslips, every pretty posy
Welcoming the May.

Then our lovely loads we’ll carry
Down the village street,
On each door, with laughter merry,
Hang a basket sweet.

Hey-a-day-day! It is spring now,
Lazy folks, awake!
See the pretty things we bring now
For the May-day’s sake!

Doesn’t it figure that two days we planned to acknowledge, had to land on the same day!  So it made for a busy day for us.  But the kids fell asleep that night with smiling faces, and peaceful hearts.

As I mentioned in an earlier post, we decided to teach the kids about May Day, and help them celebrate it the old fashioned way.  I’m not sure how many of you know the May Day Basket tradition, but I had an experience from my childhood that not only taught me what the day was about, but helped me remember it to this day.  It’s a story my kids ask me to tell them over and over. And lucky you…they insist I share it with you in this post as well.

I forget what grade I was in, but one year in elementary school, we made May Day Baskets in art class.  We were told that we were to leave it on the doorstep of an older loved one, to ring the doorbell, and run away and hide before the recipient opened the door and found the basket.  It was meant to bring joy to others, in celebration of springtime.

The only person I could think of, to leave my May Day Basket for, was my grandmother.  She was a very kind and well-intentioned grandmother, who lived in an elderly complex.  She was closer to my older sister than she was to me, but I loved her none the less in the years she was here.  The funny thing about her, to me, was that she could never remember my name.  She would always call me Susan.  It didn’t make me feel like the most loved grand-child in the world, but I understood somewhat where her confusion came from.  She did have a grand-daughter named Susan, who was my cousin of course. And it was better than the fact that she called my brother Jeffrey, because in his case, that was not his name either, and there was no Jeffrey at all in the family.  She was up there in age by this time, and sometimes it seemed she didn’t recognize us at all.

So the morning came to deliver my May Basket to Grandma.  I was a little worried about just leaving it on her doorstep and running away, because I knew she was a worrier, and it might scare her. I wondered too if she would even see it on the porch there,  because she had one of those solid white metal doors with the screen, and the step down to the porch was steep. So I brought my concerns to my mother.

My mother agreed that it might shake Grandma up, to open the door to find no one there.  And wondered too if she would notice the basket down on the porch.  So she asked me what I thought I should do about it.  I told her:

“Well, I thought maybe I should take the basket to her door, ring the doorbell, and when she answers, I could say “Hi Grandma, it’s me, Susan! Happy May Day!” and then give her the basket.

My mother laughed hysterically. And through the years she brought that story up again and again, never losing the humor she found in it.  So eventually I told that story to my oldest daughter, who is ALWAYS asking for another story from my childhood.  This one was bound to come up eventually–because honestly, I’m running out. (Or running low on memory.)  She loved the story, and laughed just as hard as my mother.  So she then asked me to tell our little ones my story, and they think it’s just as funny!  Now really, I do not think it is THAT funny, and you probably don’t either, but my kids wanted me to tell it, so there it is.  I hope it was worth a chuckle at least.  And if not, I hope the photos or rest of this post help make up for it. : )

So below are 2 photos of our kids assembling 2 May Day Baskets, for some older folks we know of.  Unfortunately, none of their grandparents are local, to be able to leave on their doorsteps.  So we chose an old couple who still live at the end of our street, where they actually raised their now grown 13 children! I think they have ump-teen grandchildren and great-grandchildren now, who all come to visit a lot. We also chose Sr. Jeremy from our parish, whose service and dedication to her vocation is truly inspiring. She is such a blessing to our parish family, and she loves children!

In the baskets the kids put what {A} shopped for the day before (with me of course):  Celestial Tea, Tea Biscuits, some chocolates, and some sugar-free hard candies.  They were such a team, and got the baskets together nicely. 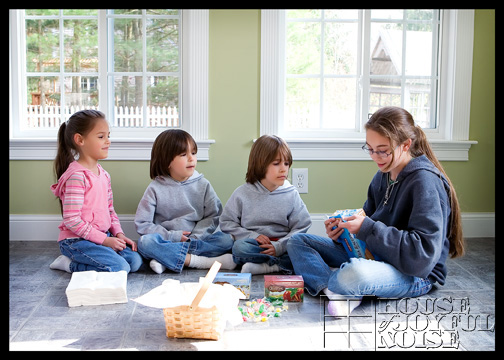 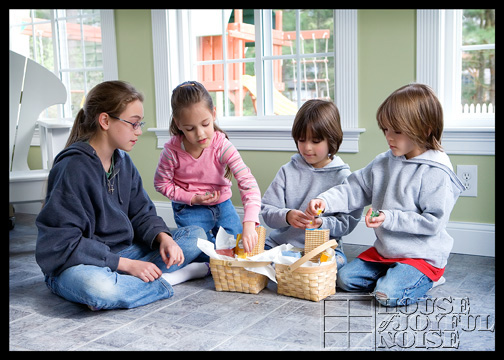 Of course then I wanted another photo of them all together. In the photo below, they are all just recovering from a hardy belly-laugh. See, I thought they were being especially co-operative for the camera, with their big smiles, until they broke out with laughter.  Turns out, Daddy was behind me, pretending to lick my head.   NICE, huh? 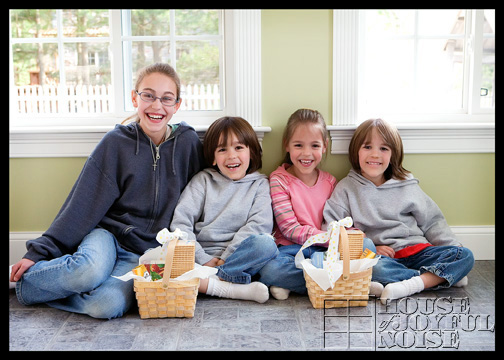 In the morning, we added the fresh flowers to the baskets, just before delivering them.  I know so many photos of this is not really necessary, but I couldn’t choose. I love each one of these images for different reasons. In the last one, {J} felt there was no room for the last flower, and decided to give it to his sister. Aawwww. <sniff> 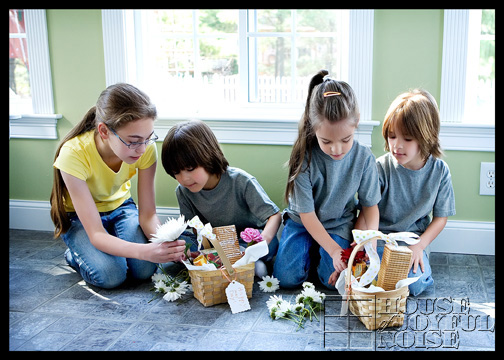 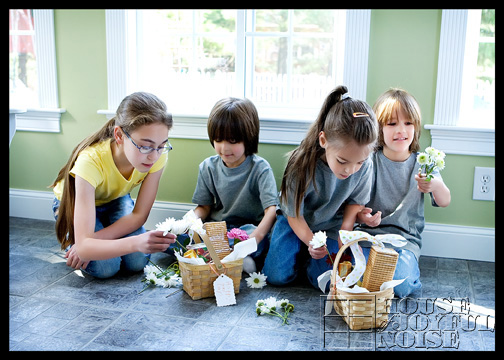 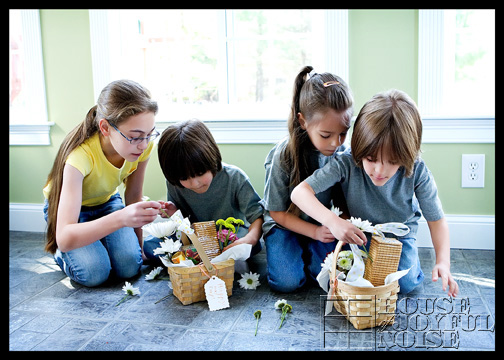 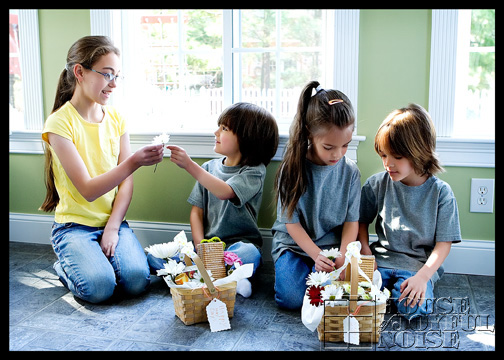 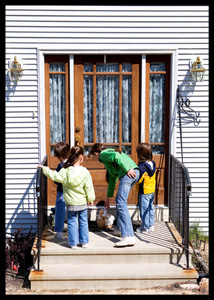 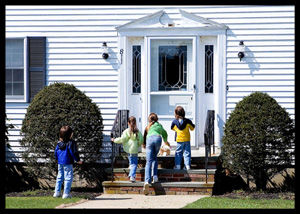 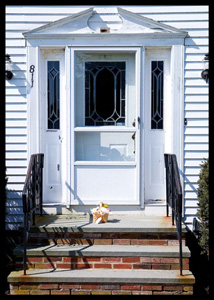 Feast of the Ascension of the Lord

With this day being a Holy Day of Obligation, we had Mass to go to that evening.

So we ate dinner early and got there in plenty of time. It was a wonderful Mass, with an effective homily (as always) from our pastor. But what touched me most, was the part of the Mass when we say the Lord’s Prayer.  As a family, we have always held hands for this prayer.  We say it together on a daily basis for Devotion, and of course always at Mass, and I don’t remember ever not holding hands. With that being said, I know there are people and families who do not join hands.  In fact, some are quite against it.  We know and respect that it is each one’s choice, and it’s a personal preference for each person.  But we just do.

So that part of the Mass comes, and as always, we join hands. I was second to the inside end, and {S} was at the very end of our family, at the far inside.  A few feet away next to him was an older couple.  As we began the prayer, I saw out of the corner of my eye, him slowly turn his head to look to his right.  And suddenly, his little feet shuffled to the right, and he reached out to hold the older woman’s hand. I looked down at his sweet face, now looking forward again, as he mumbled the prayer—holding back that smile, as he always does when he is feeling a little shy, and a little pleased with himself, at the same time.   Apparently, he noticed that the older couple was holding hands too, and so he reached out to her.  I think the lady just about melted.  I know I did.  And I was really thankful she was open to his outreach, and the notion of holding a stranger’s hand, as we were gathered together in His name, and didn’t break his little heart.

It was a wonderful day all around.  We hope your May Day was just as sweet, and if you didn’t get a basket on your doorstep, look on the bright side:  Maybe no one thinks you are old enough yet.  : )  I’m happy to report, I didn’t get one either.