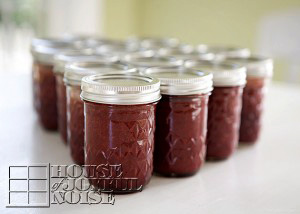 Just a bit ago, I had shared with you all what a great strawberry season we had this year, and all we have learned in the process of growing them.  Every season from the beginning, it had been my hope and plan, to learn make our own homemade strawberry jam.  The problem was, it never seemed we had quite enough berries ready, at the same time. But then between a bag we froze last year, and some more we froze this year, I was sure it was time to really try making some jam! For the first-time-ever.

Our usual household jam, has always been Polaner’s All Fruit.  Just reading and comparing ingredients with the other jams and jellies on the grocery store shelves, made the choice clear to me. I mean…I wanted all fruit.  So I was thinking I’d try a sugarless recipe to make out own jam. 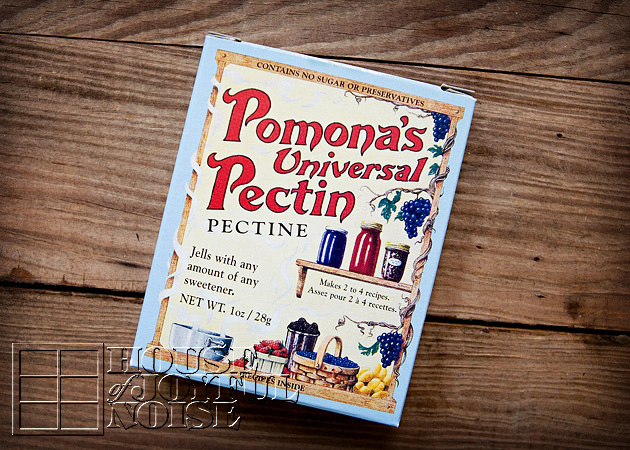 Inside the box of Pomona’s Universal Pectin (and calcium powder, necessary ingredients for making jam, I found a paper with several recipes, that I had actually read over a few times, since I bought the pectin months ago.  I kept procrastinating, because in my head, making jam,and canning it and all, seems like a huge and scary task!  And I still had questions.

So I was pretty happy when I noticed a JAMLINE on the recipe/directions paper!

I was like….”Really? There is a number I can call, with any questions I have about making this jam today?”  It was a weekend, so I didn’t think anyone would really answer.  I was imagining some company and all. But to my surprise, a woman and answered. And I could tell right away, she was not an employee in some company, but just a woman in her kitchen, who knows all there was to know, about making jam.  It was the most relaxed and friendliest conversation.  Like calling your Great-Aunt-Someone-Or-Other. We talked for awhile! I wish I actually got her real name. Maybe it was really the Pomona Family! Turns out she was located very near where I grew up in western MA.  Anyway, she answered all of my questions, and I really enjoyed talking to her, as much as I did making the jam! I learned a lot in our chat, and was so glad I called!

I thought I’d highlight some the most interesting things (to me) that I learned: 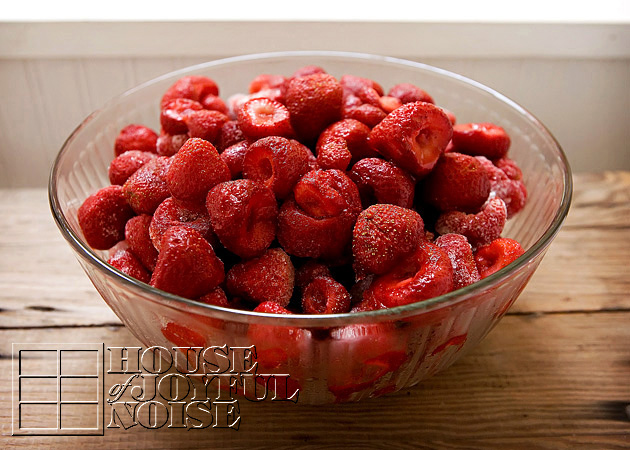 I used the 2 big ‘picks’ of berries that I had put in the freezer, after washing and hulling.

We mashed, stirred, cooked, stirred some more, filled (the jars) and then boiled them, and then let sit to cool.  After some time we started hearing Pop! Pop!  I was counting the pops, hoping they would all seal properly, so they didn’t spoil during storage.

You can get Pomona’s Recipes Low Sugar Recipe, and all of their jam and jelly recipes, HERE.

In the end we had about 16 jars of our very own Strawberry Jam!  Made in the Richard Kitchen!
I was so ready to design some of my own canning labels. 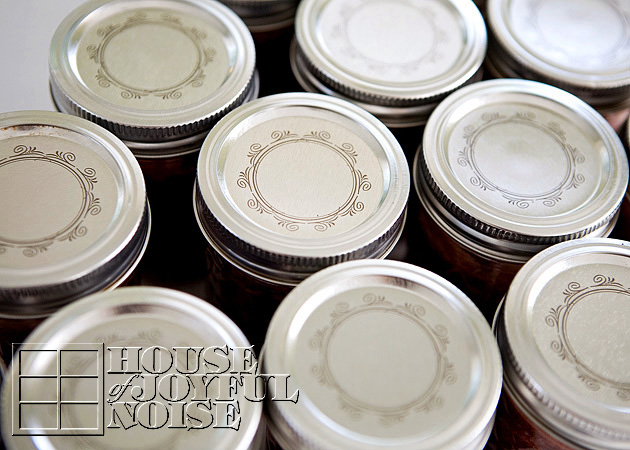 Naturally, we had to try some as soon as we could. So the next morning we opened a jar.  Very good!  Definitely a bit different taste than the Polaner’s we were used to, but we all loved it! The consistency was not as gelled as we had hoped.  Just a little runny—so I’m not sure about giving any of these jars for Christmas Gifts just yet.  I actually may call that Jamline again, and ask they nice woman what we might do better next time.  But we’ll have no problems eating up these jars, and maybe giving some away, anyway.  I already gave my brother one yesterday, and he was so excited to get it. 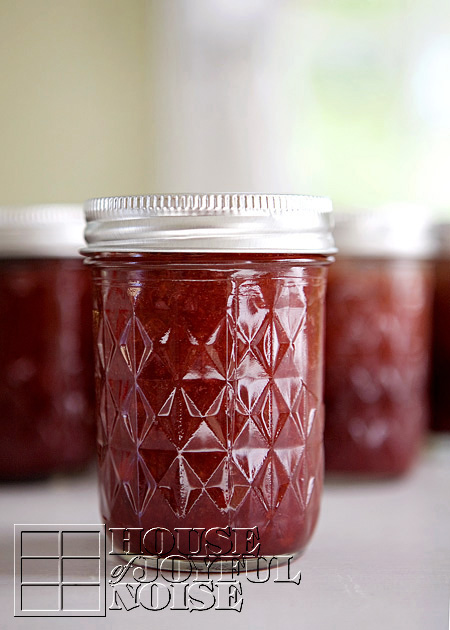 So I’d done it.  That little dream of making my own jam someday, with the strawberries I grew myself, had happened. And in retrospect, it was not nearly the big task I thought it would be.  So I am quite sure that I’ll just make our own from now on.  Providing of course, that we always grow enough berries.  Although I’d never have a problem just getting them at one of our Farmer’s Markets if need be, either.  I’m really so thrilled about this little accomplishment, and the idea that it’s one more homemade good, grown and made right here on our own little homestead.  It’s not even jam that I love so much!  It’s the idea, of it all…..just gardening and growing, cooking and canning…wearing an apron, even. You know…I like to be a little ‘Olivia Walton-ish’ when I can.  Taking care of and feeding my family, with all of the home grown love I can put in it.
That’s always the sweetest and best ingredient of all.  And it’s something you just can’t get in a jar bought at the store.

No matter how much sugar they put in it.