This morning, after having had an extended weekend away, we were planning a regular school day today, with getting some our book lessons done.  That is, until we woke up to helicopters, circling around and around, near our house.  So my husband turned on the tv to find out what might be going on, and low and behold, there was a whale carcass washed ashore on our beach nearby. Time for a spontaneous field trip!  THIS is the beauty of homeschooling!

So the kids ate breakfast, washed up and got dressed as fast as they could, and we all headed out in search of the whale. After a driving down a few side-roads that had public access ways, and checking the shore there, we finally found the spot.  Except the only way down was very steep, very sandy and rocky cliff.  But if you know us…..we went for it.   We all made it down safely, as I wondered out loud, repeatedly, how we’d ever make it back up!  But we’d figure that out later I guess.  We had a dead whale to study. : ) 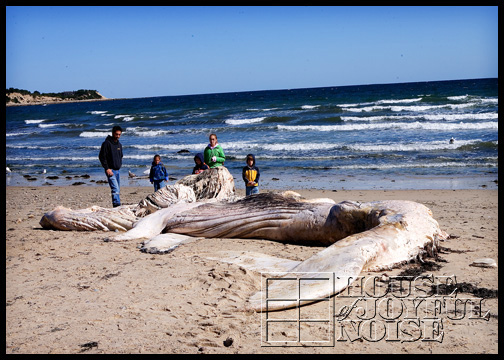 Though it didn’t seem to be a full grown adult, it was rather impressive, nonetheless. (And seemed huge to our little kids.) It was so interesting to see all of it’s parts, up close and in person.  as a whole, it was not pretty by any means!! Not anymore, anyway. Part of it was really decomposing, as it seemed to have been dead awhile, and just finally got washed ashore.

This side (photo below), was the worst. It was barely recognizable as a whale at all. And in standing on the other side, where the breeze came on off-water, the smell was intolerable. UGH! But it was this side that you could see the bones of the jaw, on the far right, as well as the eye socket.  So it was fascinating, visually.

The kids enjoyed walking around it, checking it out, asking questions and stepping on it’s tail. LOL. Naturally, I was taking photos, and thinking about blogging with such yucky, yet interesting photos, about our unexpected experience.  Below at this angle you can see the upper jaw bones even better,  on the far left this time. 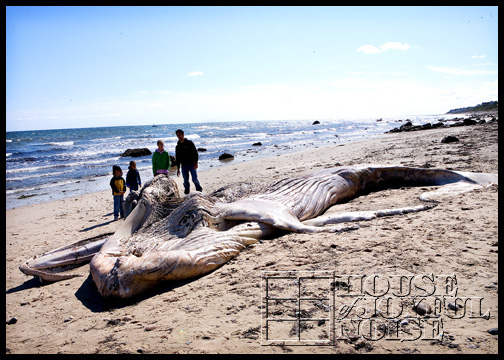 As we were looking at it, yet another couple of helicopters were flying around over head.  Other people began to arrive too, and some guessed we were homeschoolers. 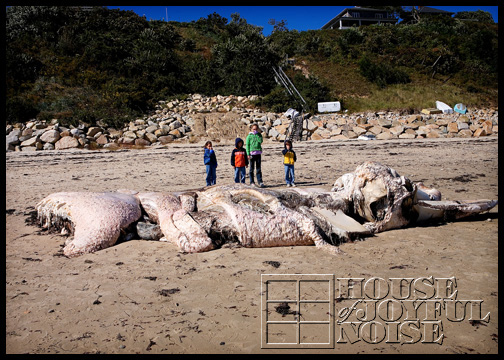 Once we had our fill of fascination and disgust, we decided to figure out which one of the many sets of beach access stairs, that climbed the cliff-side, were public.  As we made our way down the beach, we came across a scattered intestines of the whale, here and there, that had washed up separately. (Yuck.) Once up the cliff and on our way up the road, back to our van, we saw the environmental police showing up.  Marine biologists had already been there, in the earlier morning hours.

When we got home, we did some research and determined that it was a humpback whale.  Later TV news reports throughout the day confirmed that.  It’s not yet determined if this whale died of natural causes, or by accident due to being bumped by a ship, or caught up in fishing nets.  It seems they plan to retrieve the the skeleton of the whale for museum display, and either bury the flesh, or drag it back out to sea.

It was yet another homeschooling adventure our kids were able to witness! They talked about it the rest of the day, and the little ones colored pictures of whales and other sea creatures, and recreated the scene with imaginary play.  After we got all of our book lessons done of course. 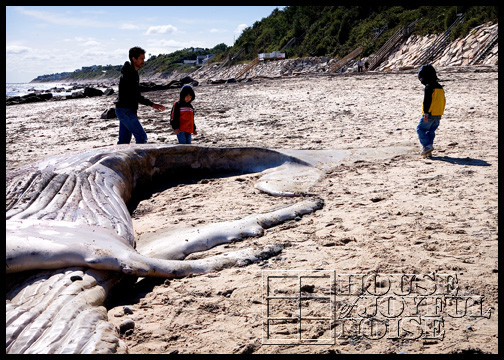