Each of our kids are pretty creative in their own rights.  Definitely different styles, ideas, and interests, but we would consider them all quite creative.  And equally messy in their creating. : )   Not to digress already, but our ‘school room’ serves many, many purposes.  It’s the most used room in our home. And it is there that the children create the most.  Sometimes alone.  Sometimes together. But either way, the mess is always BIG.  My family can tell you that there are daily lessons (or lectures….whatever you want to call it), about cleaning up after our creating!  But that one’s not sinking in as much as Mama would like. They are off to share their creation, and the mess they left behind is quickly forgotten.  Or more likely, it was never acknowledged at all!

I will never give up on teaching them to clean up their unbelievable messes, born in the process of their creating.  But I’d rather the mess, than they ever quit following their creative hearts.  Creating is a big part of their world.  Their days. Their childhood life.  And it’s one of those things that solidifies one of our purposes in home schooling them.  We want them to have OODLES of time, to do with as they wish.  To have enough free time they MUST fill on their own, that they hear the whispers of their heart. Their passions calling them. The voice of God. And they’re good at it already!!  I love to see what they choose to do–to see their imaginations hard at work, kicked into high gear— to see their own inner joy coming out, having found on their own, what makes them happy, as they pass their gift of time.

So with all of that being said, our boy {J} is definitely a unique, creative one. He is just different in his process, I guess. He is not spontaneous in his creating.  He’s a real, thorough planner (and thinker).  Often times, he tells me how he had this, or that, idea, while lying in bed waiting to fall asleep at night, and deciding what he was going to do in the morning. And trust us….we know when he gets up with a mission! He is in that school room, getting right to work on what he had planned. Immediately.  There is no time to waste.  No time to get dressed, wash up, or even eat breakfast.  He’s busy. And he needs to ‘just finish’ what he was making.  Which could be quite awhile!!  I love to just watch him at times.  Especially the cute things he does with his tongue when he is very focused.

And so we come to the focus of this particular post …  one of his grand and clever ideas. He had decided to make himself the wings and mask, of a blue jay.  Blue jays are around all day long in our yard bird sanctuary – and they do demand our attention. So it was no surprise he chose the blue jay.  What did surprise us, was the effort involved to make such a ‘costume’ once we saw what he had done.  He taped multiple pieces of paper together, to make each wing, and used a paper plate for the face.  I have reason to believe he even got out the bird identification book, to be sure of what their ‘mask’ looks like.

Now,…..had we known what he was doing, we could have offered larger paper, or cardboard, and maybe some paint, to create this bird costume. But, this creation was done before we knew what he was doing. Honestly…when he came out, showing me what he made, I must have had my mouth wide open. I was impressed, to think that a 6 year old boy would come up with this idea, and be so inspired to follow through with so much work, to make it a reality.  He even made handles on the inside of the wings, for his hands. 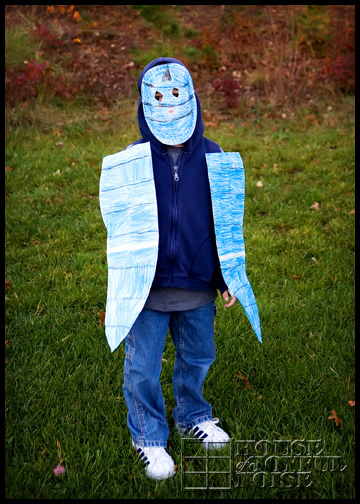 It wasn’t long  (maybe….3 seconds?), before the other little kids wanted their own bird costumes, too.  {J} was happy to help instruct, and lend a hand here and there, but he wasn’t doing it for them!!  It even took them a few days to get the coloring complete, with some requests from their big sister to help them color too.  It IS a LOT of paper to cover!  But eventually, they got them done.  Now, they may have not wanted these bird outfits quite as much as {J} did, but at least he didn’t have something they didn’t have now!  And in the end, they all were pretty proud birds.
. 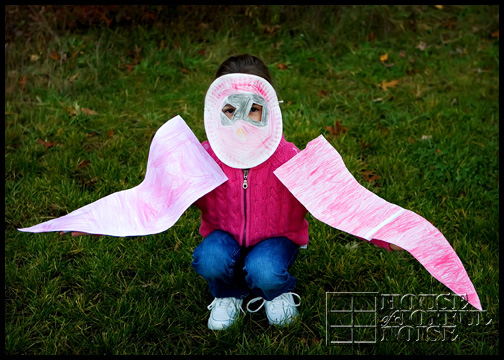 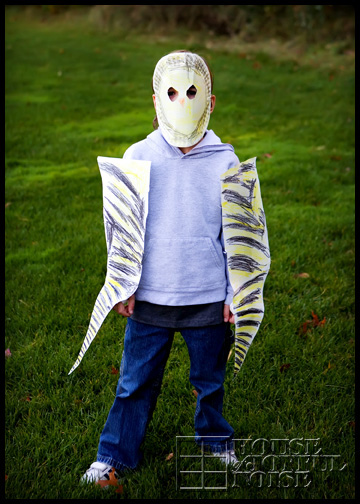 So….after having these wings and masks all over the house (and not necessarily together, as the sets they should be), I knew it was time to do something real with them.  So the other day, we took them to the park, where they could really have space, to spread their wings and fly.  And that they did. 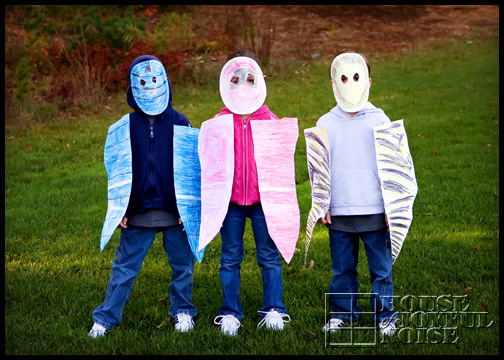 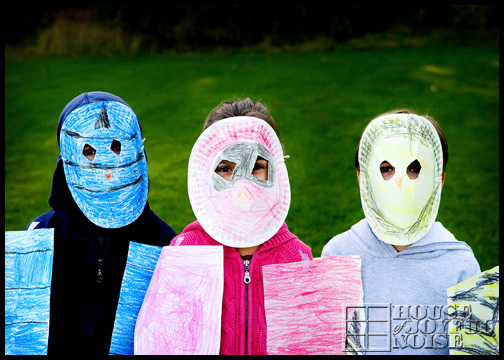 They never quite got off the ground.  In fact, the ground beneath their claws was squishing and squashing all over the place.  Apparently from a recent irrigation treatment. So, it wasn’t long before we flew back to our nest. But it was fun while it lasted, and at least I got my photos!

Oh, I meant to mention that we often joke with {J}, that he’ll probably have his own show someday.  Perhaps called {J}’s Craft Show.  He just smiles, as if it may just be what he is planning. One thing is for sure – He’s already got 2 booked guests;  his sisters, who have every intention of coming on his show.  And little does he know, his Mama sure does, too.