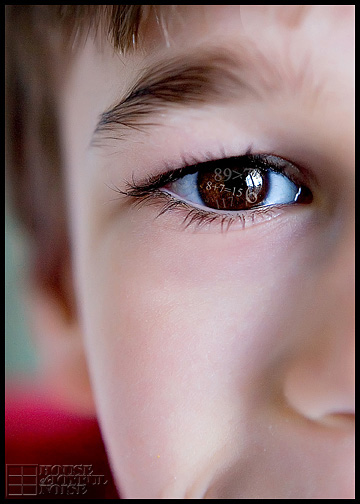 As I pondered this post I had coming up, I had a vague recollection of blogging something similar before. So I went looking and found this post from almost a year ago; Math Madness and Memorization.  So today’s post is basically talking about the fact that nothing has changed….but merely progressed quite a bit since then.  I especially love the last 3 paragraphs of that old post, as my feelings have not changed, but only grown as well.

From the time this boy, {S} was about 1 year old, he has loved everything about letters and numbers.  He was less than 2 years old when he already knew the entire alphabet.  Not just saying/singing the alphabet…..but recognizing any letter, upper case or lower case, any where, any time, in any letter style.  He gave the same zealous interest to numbers. Number recognition. Counting. He’s always been very physically active, but even so, he has always spent a lot of his mental energy on letters and numbers. And he still does.

All 4 of our kids happen to do very well with their schooling, and in all subjects. Naturally, I have a whole philosophy that explains why, in my eyes, they do so well….and enjoy it!  (Because at this age, they need to have fun learning, to learn to love learning.)  But {S} just has a particular fondness for numbers, in the form of math.  And that’s the reason why he does so well in math. Simply because he loves it, so he enjoys it, so he learns more.  I love the look he gets when you give him a problem. He looks off to the distance, and with that little content smile, you can see him calculate in his head. And then he whips his head back and let’s out the answer in a big announcement sort of way. And then he is ready for the next one. And the next one. 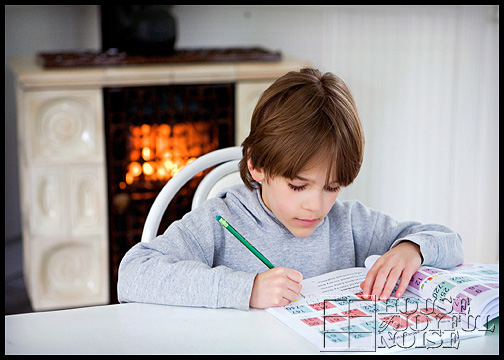 He usually zips right through his math, and rarely has one wrong either.  If we ask {J} or {O} a math problem to do mentally, {S} often blurts out the answer in a heartbeat, because he can hardly contain himself. We have to remind him over and over to not answer for them. But he REALLY wants to….because he KNOWS THE ANSWER! 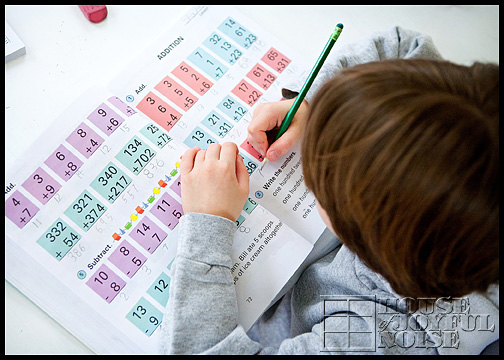 Most times, when he sees me correcting books, he wants to know if he had any wrong. He doesn’t much expect me to say ‘yes’ either.  But on the occasions when I did say yes, because there was indeed one wrong, he’s off to get his pencil and eraser, because he MUST fix it.

He loves to count days too.  How many more days until this day, or how many days ago that was.  He wants to be the score keeper when they play Scrabble or Uno, so he can add the points. 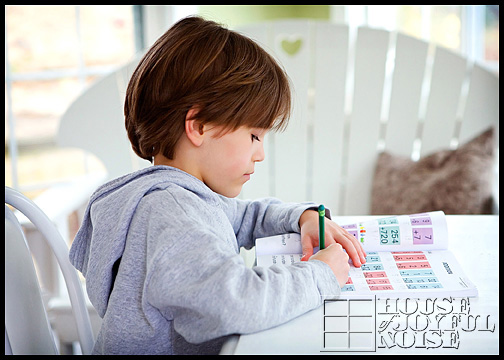 He’s just really focused, and content, in the numbers world.   I recall one week that he was just having a run of days of LOTS of extra energy, and it was tending to get him into trouble.  So over those days, when he was ‘heading down the wrong road’ so to speak, I redirected his attention.  I would simply call him over, and say “I just want you to stand here, and count to 100 by odd numbers…..real-ly slow-ly.”  And he would say ‘Count to 100 by odd numbers?  Ok!”….with a very pleased look on his face….because he was HAPPY to do it. Or, I would give him a REALLY big math problem.  Any of those times, he never ask why I wanted him to do it, because he was so excited just to get to it, that the WHY wasn’t occurring to him.   I could see the numbers going around in his head, and the little smile remained. Once in awhile he would just let me know what number he was on, to assure me he was going slowly.

By the time he was done, he was in a content state of mind, and would go off to play, imagine and create…..with the  behavior we expect and appreciate. :  )  Worked for both of us!  I’m keeping that one in my tool box.  ; )

The other day, {S} was talking to his big sister about math, and numbers.  So she shared with him that soon with school, he would be learning how to add with carrying numbers over.  She decided to show him what she meant, and then let him try it. Well by golly…he got it!  And that has been his ‘new thing’ lately.  I taught him how to know where to put the commas simply by giving him a pattern, left to right, 1-2-3-comma. 1-2-3-comma.  We have not gotten into teaching the 1st grade trio the hundred-millions place, yet.  lol.  But I am guessing soon, now!!  lol

After doing this particular math problem (above) at the table, he was pretty happy.  As usual, he said “Hey Mama!  I have a great idea!  Why don’t you take a picture of me, and blog about it!!”  (Well Ok…..twist my arm why don’t you, Math Boy. : ) And then he wanted me to take a photo of his shirt….which is his very favorite t-shirt (which he got from his aunt, uncle and cousins for Christmas one year.) 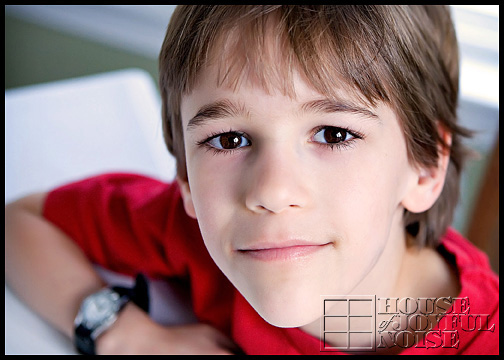 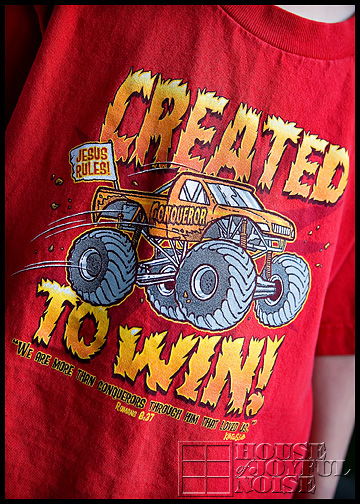 I can see why he loves it.

It think it has the truth written alllll over it!