October 2008 – This past Wednesday was the filming day of our family at our home for the pilot episode of ‘House+Home‘, for CatholicTV.  We did it! And what a day it was! In this post we are sharing all of the chaos and behind the scenes happenings of filming day at our house.

To fill you in on the premise of the show, the series of House+Home takes viewers to Catholic family homes. In each episode Fr. Reed visits the family, and learns how they use faith, hope and love to turn their house into a home, and how they as a family, live out their Catholic faith in their daily lives.

The night before, it started to hit us, what we were about to do.  As Michael and I plopped into bed about midnight, the night before, Michael whispered into the dark, “We’re crazy.”….and we both busted out laughing hysterically.

In the first place, we were a bit self conscious about the state of our home, and having it all filmed for tv, as we were still in the process of working very hard on the house and yard after a major renovation. Our home and yard projects were far from done, with much still left undone, and not particularly looking very nice! Not to mention, we were also just personally nervous and somewhat uncomfortable at the idea of being in front of TV cameras. However, we believed in the premise of the show, and hoped our going first would encourage many other families to follow in our footsteps and also share this beautiful faith, and how they too uniquely live it out daily in their own lives. We certainly had personal stories and testaments of our faith to share, and knowing too that it is the love, of Christ and family, that makes a house a home, (and not the projects completed or not) we felt called by God to respond with a ‘yes‘, after Fr. Reed asked our family to be filmed for this pilot episode.

It was also one of those experiences that don’t come along every day (certainly never in our days).  What a wonderful and educational experience for the kids, to not only see television production, but be a part of it, and to realize all of the hard work that goes into making a tv show.

Fr. Robert Reed (president of CatholicTV, and host of the show) had filled us in very well in the prior weeks, of exactly what to expect throughout this filming day. There were no surprises. (Well, maybe a few little ones. lol) Somehow, though, when the crew started arriving, setting up all of the equipment, and having little crew huddles talking about their plan and work to be done, we felt the nerves start to set in!  But it wasn’t long before we were filming segments, and there was no time to even think about nerves, because we were so focused on what we were saying and doing.

Of course I took any behind-the-scenes photos I could get in.  There aren’t many though, because I was on camera myself most of the time!  But here are some behind the scene snapshots I managed to take, to share, and record this day for the kids. I won’t bother telling you about the entire day, because honestly, there’s a lot and I’m not sure I could remember it all. It was many hours of footage. But here’s a preview, and I guess you’ll just have to watch the episode to get the rest!

The filming started with our guest, and host (and creator, I believe) of the show, Fr. Reed arriving: 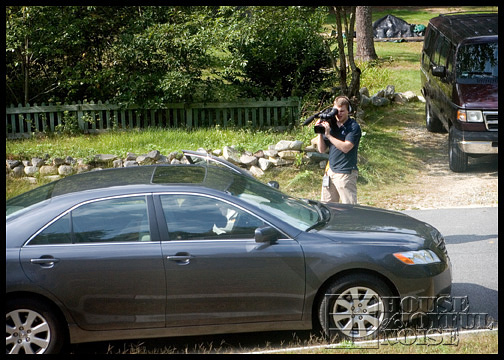 We welcomed him to our home, chatted a bit in the sun room, and then we gave him a tour of the house and our studio/work areas.

After wards, we all had interviews with Fr. Reed. {A}’s (our oldest daughter) was first, outdoors in our work-in-progress-yard, ‘up in the mountains’, near the huge pile of tree brush and stumps, which is only still there because it is where some of A’s chipmunks live.  (She has hand-tamed a large number of chipmunks.  See for yourself HERE.) We were all hoping they would come out for {A}, as they always do, but with the crew all around, it wasn’t happening. They were too shy and scared.  Earlier though, one of the crew guys did happen to see out the slider door,  one of the chipmunks come up on the deck and around our door, waiting for {A} to come out and feed him, though.  Anyway, we couldn’t hear {A}’s interview down in the yard, but I did get this shot of them up there filming it.  Her interview will be a bit of a surprise for us all. 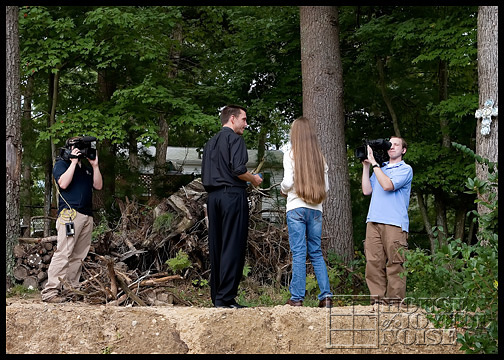 After that was what they called ‘the triplet interview’, which I had no idea they planned on doing. (Surprise #1)  { J, O and S}, did really well.  We couldn’t actually hear all of that either, but it looked like it was going really well.  We’re anxious to hear what they said. (And can only imagine!) Bet it’s going to be cute! 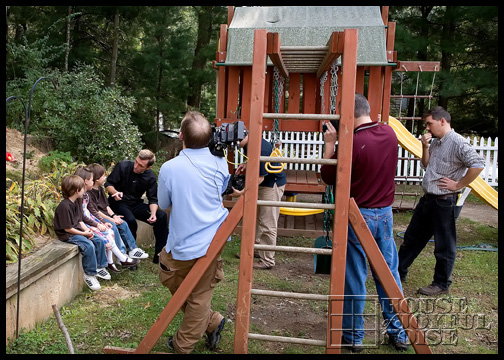 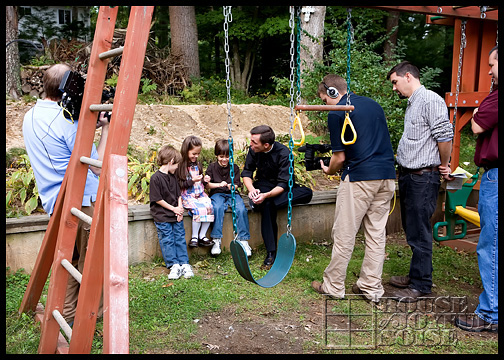 Us parents had a couple’s interview, as well, also by Fr. Reed, of course. Ours was in the house, and the hardest part for us.  We had the big light on us, and it was like a real tv studio interview, with crew guys and equipment all around.  But Fr. Reed asked great questions about our faith, how it encourages and sustains us in our lives for us personally, and more. We think it went pretty well. Of course, we started thinking about what we forgot to say, or wish we didn’t say, lol…but no one knows those things.  For just regular people here, I think we did pretty well.  Ok, I did choke up once, because some questions were linked to emotionally deep stuff for us, but, I got it together. ; )  No photos of us being interviewed, of course, but they filmed it all.  It will be edited down, of course.

Cameramen were just all over the place, all of the time.  It’s true that you do start getting a little used to it, pretty quickly. Here’s just one of the guys in our unfinished stairwell to the upstairs. 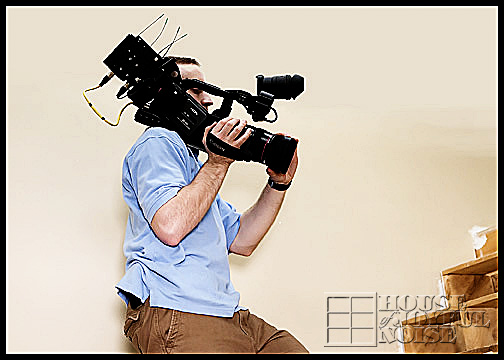 Sharing a Meal Together

We invited Fr. Reed to stay for dinner, as is part of the show (although we were happy to anyway), and made our family recipe/tradition of pizza together in the kitchen.  He helped make the dough. : )  When the pizzas came out of the oven, we gathered around the table, and had grace and dinner together, but of course we fed the crew, too! Here (below) they are, minus the photographer (for the CatholicTV Magazine), who left a little early before filming was done. (We wrapped up some pizza to go for him.)   Can I just say the whole crew is the NICEST bunch of guys, and were so great to work with! Just great guys. The guy on the left was the producer.  It was kind of funny to see the them squirm a little, though, when they found themselves in front of MY camera.  I guess THEY prefer to be behind the camera, too! Imagine that! But they kindly obliged. (Thanks guys!!) 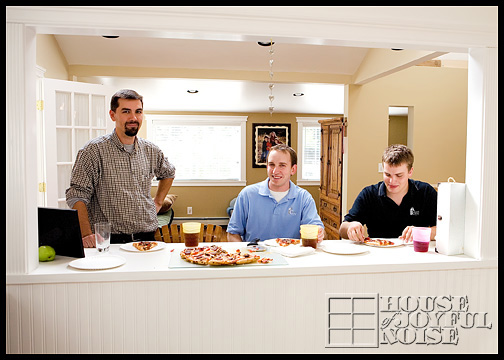 Blog Fan in the House!

After dinner, Fr. Reed took the kids to the computer, because apparently he’s a new fan of our blog! (Surprise #2).  They talked with him about their photos on it, and some of their adventures and activities, and then they went to CatholicTV.com.  The kids are very familiar with CatholicTV, and all of the shows Fr. Reed is on.  So they got a kick out of watching it on the computer, with him on it, and yet him also sitting in the computer chair next to them, watching it with them. lol 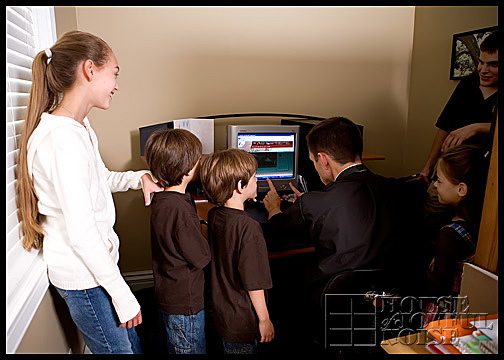 Our Visit and Filming Ends

We filmed the good-by and end of our visit, with us waving, and Fr. Reed driving off.
But then Fr. Reed came back, off-camera. lol

After filming was done, and the crew was packed up and gone, Fr. Reed gave {A} a little Latin lesson, which he has done virtually every Sunday after Mass at church, for quite awhile.  It is he, who inspired {A} to take Latin as a subject this school year (at home), which she is doing very well in.  She loves it.  So here they are, as he gives her another one of his little lessons. 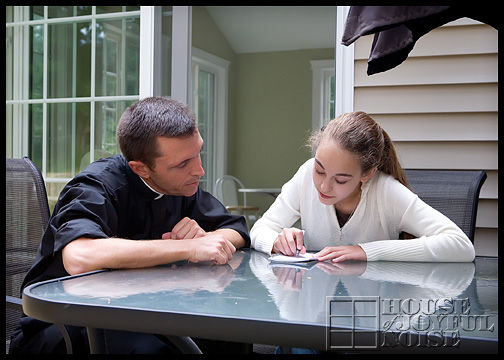 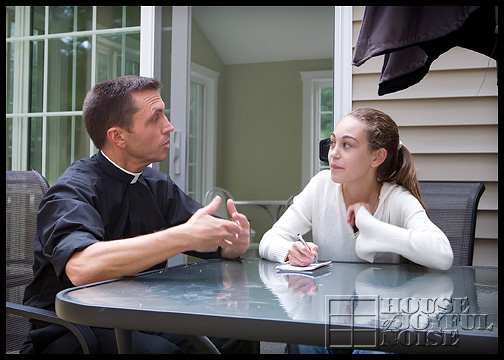 When Fr. Reed left for real, we were wiped out!! We were relieved we got through it, and it seemed to go so well. (I guess we’ll all see soon enough!)
We really enjoyed the whole process, though. It was just an amazing day we will always remember. Surreal, really.  As long and tiring of a day that it was, we are so glad we did it. The kids did so well, all day, and we’re really proud of them.  It was a big day for them. We certainly have a new and even greater respect for television production, and all Fr. Reed does at CatholicTV, every day!

Somehow though, the whole day’s experience really gave us a heightened sense of the real family that we are, and how very blessed we are. It also seemed to call for a family photo, via the timer in my camera.  : ) After the photo, as tired as were were, we were also wired and had some funny energy to get out.  So we all changed into jeans and sneakers, and went to the park (actually, we went to 2!) to run, climb, and even play hopscotch.

The next morning, after devotion, and before a regular schooling day, we asked the kids “What was your very favorite part of the taping day?”.  They all just smiled big as they thought and thought, and it was so quiet for a moment. And then {A} said “I don’t know…I mean, the whole day was just totally fun!!”….to which {J, O and S} replied…”Yeah!  The whole day was TOTALLY FUN!!“.   Indeed it was.

We’ll keep you posted when we know an air date for the show, and when the series begins.  Today was another special day, of which we’ll blog about next. Meanwhile, thanks so much, for checking in, and sharing in our experience with us. 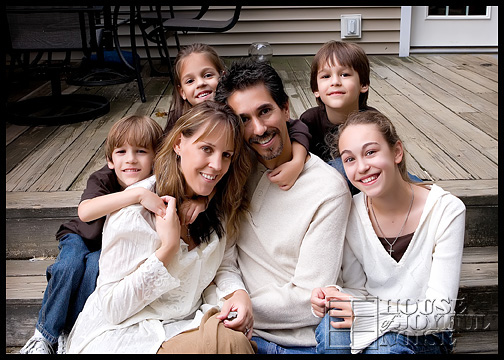